Turkey may face an unexpected backlash within its borders from its goal of undermining the gains of the Kurds in Syria by launching an operation in Jarablus. 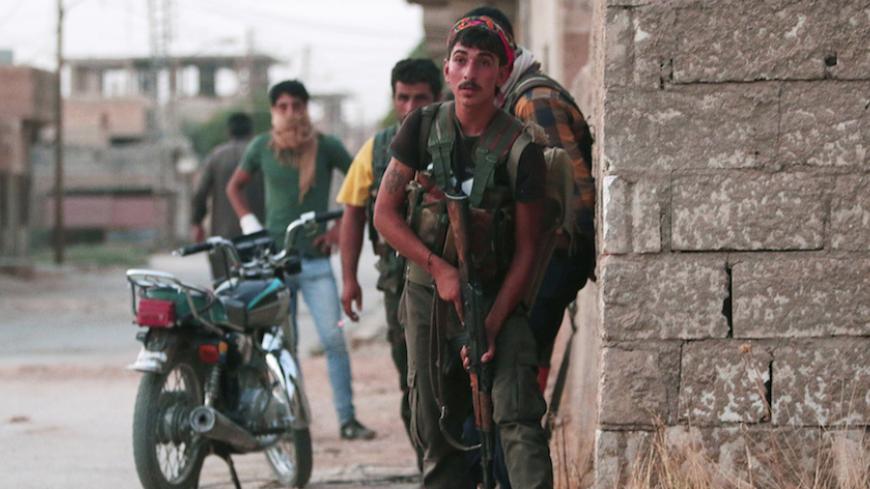 Kurdish fighters from the People's Protection Units (YPG) carry their weapons as they take positions in the northeastern city of Hasakah, Syria, Aug. 20, 2016. - REUTERS/Rodi Said

Dozens of civilians have been killed by Turkish fighter jets in the country's recent intervention in Jarablus, Syria. Turkey and a number of armed groups it is supporting have attacked the US-backed Syrian Democratic Forces (SDF) and the Kurdish People's Protection Units (YPG).

So the Kurdish question in Turkey has now spilled over to Syria. The Syrian crisis is now a domestic issue for both the Kurds and the Turks.

Turkey entered Syria under the pretense of "the fight against the Islamic State [IS]." But there has been no clash between the Turkish army and IS. Turkish officials continue to deem the Kurds more dangerous than IS. Soon after the Jarablus operation started, Turkish Prime Minister Binali Yildirim confirmed that the targets were the Kurdish forces and the local Arab groups working with them.

Last week we predicted that the situation was going to get worse before it gets better, and some had found this a pessimistic analysis. Unfortunately, we were proven right.

Currently, the area south of Jarablus is controlled by a local group called the Jarablus Military Council. This group was formed by Arab and Kurdish fighters in the region as part of the SDF. IS fighters are deployed west of Jarablus. But rather than moving in that direction, the Turkish forces attacked to the south and heavy fighting broke out.

After two days of tension, the sides struck a cease-fire Aug. 31 under an initiative by military officials from the United States. Washington announced the cease-fire, though Turkey strongly denied it. Currently, the Sajur River, about 20 kilometers (12 miles) south of Jarablus, is serving as a buffer between the Jarablus Military Council and the groups affiliated with Turkey. The US-led coalition is monitoring the situation.

Right now the cease-fire appears to be holding, though Ankara still hasn't acknowledged it.

The Turkish army and the groups it is supporting did not engage IS militarily. In an Aug. 28 interview with pro-government Turkish daily Yeni Safak, one of the commanders of these groups, Ahmet Berri, actually stated that IS had left the town before they had arrived. In the same interview he stated that they were targeting Manbij.

All of these developments reveal that Turkey will not change its policy regarding Syria and Syrian Kurdistan (a self-proclaimed autonomous region) in the short-term. Turkey thinks it will defeat the Kurds outside of its own borders. Turkey’s primary strategy is to hinder a Kurdish entity by claiming that “the YPG is in Jarablus and they are affiliated with the Kurdistan Workers Party (PKK),” which Turkey and the United States consider a terrorist group.

Yildirim said Aug. 22 that Turkey will not accept a Kurdish corridor in Syria.

In July, Turkish President Recep Tayyip Erdogan said, "We should not make the same mistakes we made in Iraq in Syria,” referring to Turkey's inability to block a Kurdish entity from forming in Iraq.

Turkey's goal is to defeat the Kurds. But its continued attacks against the Kurds will only strengthen IS, as many observers have noted. This could mean that Turkey would be directly involved in ensuring that IS remains in key places such as al-Bab and Raqqa.

If one looks at the situation in the field, it is clear that Turkey and the groups it supports will want to move toward al-Bab from northern Manbij and open a corridor to Aleppo to cut off any connection between Manbij and Afrin. But to achieve this, Turkey would need to do something it hasn't done so far: fight IS. The groups supported by Turkey have no capacity to fight IS. Turkey’s airstrikes and heavy artillery can only be effective to a certain extent. One shouldn’t expect fighting between IS and Turkey anytime soon. Both see the Kurds as a joint enemy. This natural alliance will continue for some time.

It will be interesting to follow future developments in the al-Bab region. Turkey’s strategy may fall apart here. Once we know the position the United States and Russia take in accordance with the developments in this region, we'll have a clearer picture of their long-term policies for Turkey, Kurds and the Syrian issue as a whole.

Despite attaching great importance to their relations with the United States and Russia, Kurdish forces have not handed over their destiny to them or any other powers.

And what do the Kurds think of this situation and what kind of model are they proposing in Syria? Are the Kurds committing ethnic cleansing, as Turkey alleges, in the regions they take under their control? What are the realities on the ground? These important questions need to be examined thoroughly.

As of yet, there have been made no calls from Syrian Kurdistan, which the Kurds call Rojava, for secession from Syria and the establishment of an independent state. The Kurds pursue a federative and democratic Syria with Damascus as its capital, which respects Syria's territorial integrity.

The primary demand of Kurds is to be recognized as a people in Syria. Under their model, there would be equitable representation in every settlement where Kurds and Arabs live together. All languages would be officially recognized. One of the co-presidents in the largest canton of Rojava, Cizre, is an Arab, and the other is a Kurd. The SDF and Northern Syria Democratic Assembly involve representatives from all peoples.

However, according to the Turkish state, Kurds want to divide Syria. Turkey's concerns over Syria's territorial integrity are not taken very seriously in the region.

The problem between Turkey and the Kurds already had a regional character, and it has expanded to a larger area now.

Those who want peace propose one solution: reopening talks with imprisoned PKK leader Abdullah Ocalan and returning to the negotiating table.

No one has heard any news from Ocalan for over a year. Delegations from the state and the pro-Kurdish Peoples’ Democratic Party (HDP) met Ocalan at his island prison of Imrali dozens of times from 2013 to April of 2015. The solution model Ocalan proposed encompassed a resolution in both Turkey and Syria-Rojava. However, the Erdogan government has closed this door.

This situation has brought the Kurds to a new political junction with Turkey. The main constituents of Kurdish politics in Turkey made a joint statement Aug. 31 in Diyarbakir, announcing that 50 people will go on a hunger strike starting Sept. 5. The hunger strike, to be launched by parliament members, mayors, artists and representatives of nongovernmental organizations, will no doubt raise tensions more.

Erdogan seems to have consolidated his position in accordance with the operation in Syria. Can Turkey score an absolute military victory over the Kurds? One does not have to be a Kurd or a politician to understand this. It is enough just to know a little sociology.