Why did Russia offer autonomy for Syria’s Kurds? 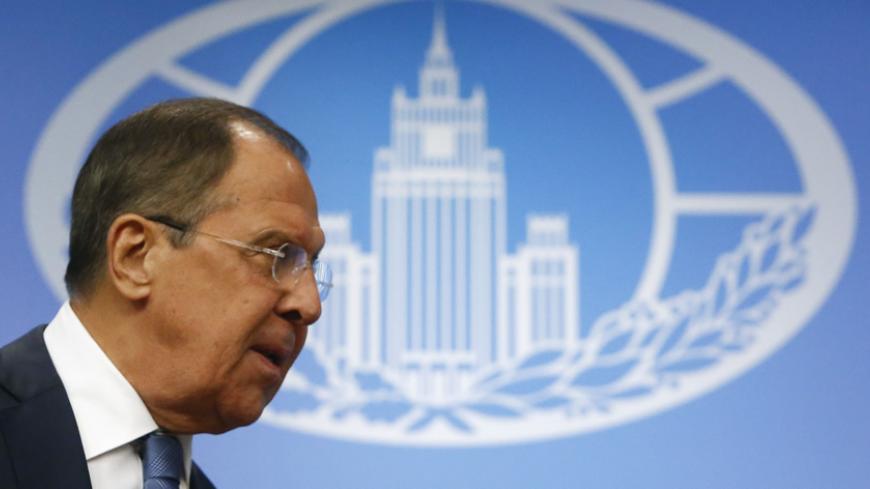 Russia’s diplomatic blitz did not end in Astana, however. On Jan. 27, Russian Foreign Minister Sergey Lavrov met with Syrian opposition parties in Moscow for further discussion of a Russian draft of a new Syrian Constitution that had been offered in Astana. While representatives of the Saudi-backed High Negotiations Committee of the Syrian opposition and the National Coalition for Syrian Revolutionary and Opposition Forces refused to attend, the Syrian Kurdish Democratic Union Party (PYD), which Turkey had excluded from the Astana talks, participated in the Moscow meeting.

Maxim Suchkov reports that the draft constitution includes restrictions on the power of the Syrian presidency, with most powers deferred to the parliament and a newly created “Assembly of Regions.” Under the draft, the president would serve for seven years with no option for a second consecutive term.

Most controversial in the draft may be the decentralization of government authorities and the empowerment of local councils. “One issue that has stirred debate,” Suchkov writes, "is a provision allowing for 'autonomy of Kurdish regions,' which Russia sees as an adequate compromise for the country’s federalization. A provision stipulating equal rights for Kurds and Arabs on Kurdish territories is also remarkable. Moreover, under the proposed draft, every region in the country should be given the right to legalize the use of a language of the region’s majority — in addition to the state language and in accordance with the law.”

Not surprisingly, Suchkov continues, the draft elicited strong reactions from the parties to the conflict. “So far,” he writes, “the Kurdish issue is the most controversial. Turkey, Damascus and the Arab opposition forces all have their own caveats about the proposed autonomy — and it doesn’t please the Kurds, either, as they want more.”

This is not the first time that Russia has floated the idea of autonomy for Syria’s Kurdish regions. Al-Monitor broke the news of a Russian-mediated effort in September that broached the subject of autonomy, but was dismissed by the Syrian government.

Russian Foreign Ministry spokeswoman Maria Zakharova denied that Russia was backing autonomy for Syrian Kurds, saying, “Only Syrians can uphold their country as an integral, sovereign, multi-ethnic and multireligious country.”

Lavrov contrasted the Russian draft with the Iraqi Constitution, which he claimed was “forced” on Iraq by the United States. “We have only offered our proposals to the Syrian parties without any intention of forcing them to adopt them,” he said. “Based on the experience of the past five years, we are convinced that practical work can only begin if specific proposals are put on the table. I hope that all Syrians will read our draft while preparing for a meeting in Geneva and that it will provide an impetus for a practical discussion of ways to achieve accord in Syria in keeping with the Geneva Communique.”

Suchkov said, “The expectation in Moscow is that, at the end of the day, the parties will share the view that extreme, uncompromising positions will mean no end to the civil war in the near future, while the proposed formula may be the best possible solution under the current circumstances.”

Turkey bogged down in al-Bab

Metin Gurcan reports that the Turkish military is facing a “new generation of urban warfare” in its battles against the Islamic State (IS) in northern Syria, as well as expanded military arsenals of both the Kurdistan Workers Party (PKK) in Turkey and the People's Protection Units (YPG) in Syria.

Gurcan writes, “The Turkish Armed Forces (TSK) is learning on the ground in al-Bab clashes how tough the new generation of urban warfare with the Islamic State (IS) can be. Turkish troops are experiencing major tests against the defensive model IS has developed based on tunnel warfare, anti-tank missiles and vehicle-borne improvised explosive devices, used with lethal effect in urban warfare. Ankara is now seriously considering whether the PKK will also be achieving the military technology and modern military capability levels of IS."

He adds, “Because of the wars in Iraq and Syria with advanced weaponry used by all belligerents, the PKK has become a sophisticated force by diversifying its weaponry, ammunition and equipment. The Turkish military notes the PKK and its northern Syrian combat affiliate, the People's Protection Units (YPG), are gradually becoming more of a regular army by constantly improving their conventional capabilities such as armored unit tactics; artillery and rocket-fire support without line-of-sight availability; large-scale logistics movements; coordinating close air support; and providing artillery-forward observation, surveillance and reconnaissance with unmanned aerial vehicles (UAVs) and urban warfare.”

How are the PKK and YPG obtaining these advanced weapons? Gurcan writes, "A hard reality everyone knows but doesn’t talk about is the weapons black markets that have blossomed in Syria and Iraq, where one can buy or lease any weapons system including tanks and multibarreled rocket launchers. Particularly widespread in Syria is the sale in bazaars of guns and ammunition sent to opposition armed groups or exchanges with other groups. US, European and Iranian weapons and ammunition supplied to armed groups such as Kurdish peshmerga forces, the Iraqi army and Shiite militias are sometimes transferred to the PKK or sold on the market. One must also not ignore the PKK/YPG war booty of weapons and equipment — especially from their clashes with IS.”

Khaled al-Khateb reports from the front lines with the Turkish-backed Free Syrian Army near al-Bab that the fight against IS has been difficult. IS fighters are dug in and the Turkish effort is complicated by the role of Syrian Kurdish forces. “The forces leading Operation Euphrates Shield,” Khateb writes, “which include FSA factions and special Turkish forces, have been at odds with the [Syrian Democratic Forces] SDF, of which the Kurdish People’s Protection Units (YPG) constitute the backbone. Turkish officials consider the SDF a threat to Turkey's security as the organization is an extension of the Kurdistan Workers Party, which Turkey considers a terrorist group. The interests of Turkey and the FSA are similar, as they both fear the SDF’s separatist goals.”

In the first of a new series of long-form, in-depth articles, Amberin Zaman describes the complexity of Kurdish regional dynamics from firsthand reporting in Syria and Iraq, including the rationale behind what Syrian Kurdish leaders now call the “Democratic Federal System of Northern Syria.”

“Cynics say the change is a ruse to mask Kurdish domination over the area,” Zaman reports. “Rojava’s leaders say the federation is a blueprint for the secular, egalitarian, multi-ethnic and federal plan they giddily imagine for the rest of Syria. Most people still call the place Rojava, and its administrators make no secret of their desire to dilute decades of government-enforced Arabization crafted to efface the Kurds.”

She continues, “Education is a key pillar of this new order, and mandatory schooling in the Arabic language is being phased out. Kurds, who make up the largest ethnic group in Rojava, are finally receiving education in the long-banned Kurmanji dialect of Kurdish that is spoken here. Arabs continue to send their children to Arabic schools while Syrian Orthodox Christians, also known as Syriacs, tutor their children in their own tongue.”

“In practice, things are a lot fuzzier,” Zaman observes. “Young Kurdish students are easily immersed in Kurdish-language education, though the program remains very much in the pilot stage. But Kurdish and Syriac high school students who are caught in the middle continue their schooling in Arabic-language facilities affiliated with the Syrian Ministry of Education. Only these schools, which include the Taleyah lycee, offer diplomas that are internationally recognized.”

The Kurdish administered regions of Syria have become laboratories for the revolutionary, egalitarian ideas of “Abdullah Ocalan, the imprisoned leader of the Turkish-Kurdish rebel group called the Kurdistan Workers Party (PKK). When Ocalan and his comrades set up the PKK in 1978, they said they would be fighting for an independent Kurdistan that would unite the Kurds of Iran, Iraq, Syria and Turkey. But over time the PKK scaled back its ambitions as geopolitical realities set in. Ocalan now preaches a radical brand of communalism that rejects ethnic nationalism and national borders and encourages gender equality and environmental friendliness in their stead."

She adds that Ocalan’s world view is influenced in by the “late American libertarian socialist Murray Bookchin. Yet for all its talk of diversity, Rojava is unabashedly Kurdish, its leadership is top-down,” and the PKK is clearly at the top.

Syria’s Kurds also have a complicated relationship with the leadership of Iraqi Kurdistan.

“Massoud Barzani, Iraqi Kurdistan’s president and the leader of the Kurdistan Democratic Party (KDP) on which the KDP-S was modeled, is well liked throughout Rojava and especially in Derik and its environs, where the yellow KDP banner flutters above entire villages,” Zaman reports. “Muhammad Yusuf, who runs a small shop that sells mobile phone accessories, said cellphone covers with Barzani’s face sell in numbers equal to those featuring Ocalan. Barzani owes his popularity above all to his father, the legendary Kurdish warrior Mullah Mustafa Barzani, a central figure in the Kurds’ struggle for freedom. But Barzani’s friendship with Turkey and hostility to the PYD are beginning to dent his image here. Still, Barzani is lobbying the United States to pressure Rojava’s leaders to let back in some 3,000 KDP-S fighters he helped arm and train. The aim, Barzani says, is to unify the Kurds. Critics counter that it is to shatter the PYD’s monopoly over power to his own advantage. The Rojava administration says it will allow the KDP-S forces to return provided they agree to fall under their command. But they won't.”

Zaman’s exclusive report is part of Al-Monitor’s expansive offerings to provide the most extensive coverage of the Middle East. As always, any feedback is appreciated at contactus@al-monitor.com.

by Murielle KASPRZAK and Joseph SCHMID | AFP | May 26, 2022
END_OF_DOCUMENT_TOKEN_TO_BE_REPLACED