Did Erdogan look the other way during YPG operation in Syria?

The range of Turkey’s howitzers determines the limits of its game in Syria. 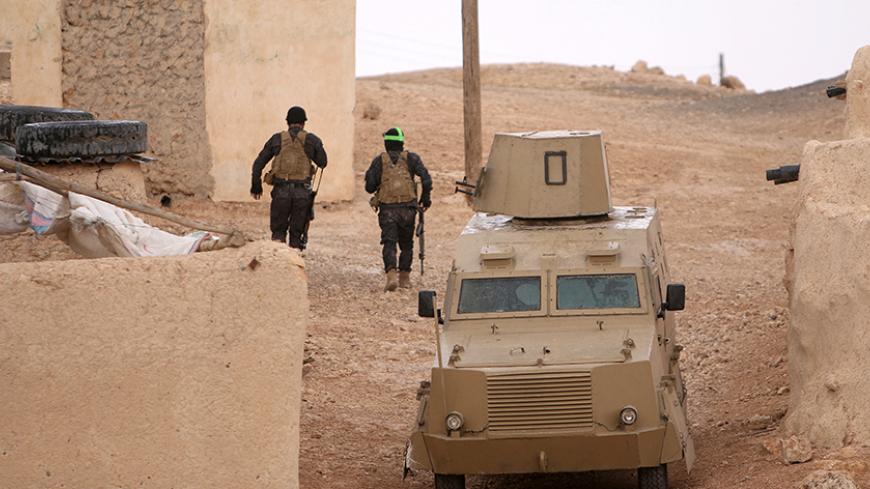 Fighters of the Syrian Democratic Forces walk in the southern rural area of Manbij in Aleppo governorate, May 31, 2016. - REUTERS/Rodi Said

Turkey's not seeing red anymore. Well, at least not as much.

The current operation launched by the Syrian Democratic Forces (SDF) at Manbij in Syria, spearheaded by the Kurdish People's Protection Units (YPG), helped fade Turkey’s red lines in the region. Until a short time ago, Turkey’s stance against the Kurds was truly hawkish. The pro-government daily Sabah used this headline Oct. 26 for its report of the YPG crossing to the west shore of the Euphrates, “YPG learned its lesson for crossing the red line.”

Then-Prime Minister Ahmet Davutoglu followed later with, “We have informed both the United States and Russia. We told them the PYD [Democratic Union Party] will not cross … and we hit the PYD twice.”

But on June 3, photographs circulated of the YPG crossing the river with not only fighters, but with tanks and military vehicles at Karakozak, which was once considered Turkish territory and housed the tomb of Suleiman Shah. But this time the Ankara government acted as if it had come to terms with the YPG crossing the Euphrates under the SDF banner and launching an operation.

Turkish President Recep Tayyip Erdogan’s remarks after his telephone conversation with US President Barack Obama suggested that Erdogan has softened his opposition. “Nowadays, there are about 450 YPG militants in the SDF. They have about 2,500 Arabs in that force. That means about 3,000 people are involved in this operation. We were told that the YPG will basically be a logistics element at Manbij and the real force will be made up of Arabs,” Erdogan said.

Reports say Obama had told Erdogan that the number of YPG forces in the SDF would be limited and assured him that after the expulsion of the Islamic State (IS) from Manbij, the YPG would be withdrawn.

Since then there has been speculation that Turkey — badly in need of appearing to be a country combating IS — had not only agreed with the operation but actually supported it. Turkey, however, still publicly maintains it will not support a force that includes the YPG. The dilemma is that Turkey’s action in Syria is limited to artillery fire from its border. Turkey doesn't want to use its air force and risk retaliation for downing a Russian military jet in November 2015. In other words, Turkey’s effectiveness in Syria reaches only as far as the range of its howitzers — in this case, 40 kilometers (25 miles). Manbij is about 25 miles south of Turkey’s border.

Turkey’s priority is to protect the supply line to the opposition forces it supports in northern Syria (though Turkey targets Kurdish-held areas more than it targets IS).

It was actually the IS attacks against the Azaz-Marea line that forced Turkey to support the Manbij operation. To prevent the Kurds from entering the Azaz-Marea or Jarablus-Manbij lines, Turkey had offered the United States the option of using Turkish-supported opposition groups to keep IS away from the border. These groups, supported by Turkish artillery fire, actually captured Al Rai but held it for only four days before retreating.

IS not only recovered the territory it had lost, but pressed hard on the Azaz-Marea line and severed that corridor. This unexpected victory by IS panicked the Turkish government and muted objections to US joint operations with the SDF. Blows against Turkish-supported armed groups by IS offered a trump card to the Kurds. These Turkish-backed groups need SDF permission to exit the siege they are under. The SDF’s condition for opening a corridor from Marea to Aleppo is for the Turkish-supported armed groups to halt attacks against the Kurdish Sheikh Maksoud district of Aleppo. There is speculation that some of those groups might soon join the SDF. At the moment, at least two Turkmen units are cooperating with the YPG, showing that the Turkmen card is not entirely in Turkey’s hands.

While the United States is trying to conduct surgical operations without angering Turkey, Kurds have their own calculations. For one thing, the Kurds, in harmony with the US policy of appeasing Turkey, behave as if there are no Kurds involved in the Manbij operation. Kurds are as adept as Americans when it comes to soothing Turkey. Pro-PYD media persistently report that the operation is commanded by the Manbij Military Council with the SDF providing logistical support.

There is no mention of the YPG anywhere. As it happened at Tell Abyad and Shadadi, where IS was defeated, the Kurds are assuming a “protection and structuring” role by setting up a local assembly and administration structure compatible with ethnic realities.

PYD officials told Al-Monitor the same road map will be followed at Manbij. A field reality that must not be forgotten: There are 134 Kurdish villages in this region that offer the YPG a natural terrain in which to operate. Kurds here don’t have to fly the YPG banner.

PYD sources briefed Al-Monitor on negotiation talks of an open-ended strategy to open a corridor from west of the Euphrates all the way to Afrin and Turkmen Mountain. Their strategy is for the SDF to advance with two prongs from Tishrin Dam to Manbij, defeat IS and then wait. The situation will be assessed after security and civilian rule are achieved in Manbij, as it could take longer to control the area depending on how much territory is captured. After Manbij, if the shade of Turkey’s red lines is suitable, an operation could be launched toward Jarablus. Or, if Turkey uses artillery fire to keep the Kurds from approaching the border, an operation could be launched against al-Bab instead. Securing al-Bab would mean opening a corridor south of Afrin. Also, remember, there is the Syrian national army south of al-Bab; its entry to al-Bab before the Kurds could upend this game plan.

Regarding the US attitude toward al-Bab and Jarablus, a Kurdish source said, “The United States will not help with the Jarablus operation because of Turkey.” But will the United States block such an operation? “No, it won’t," he replied.

"In a way they are telling us, ‘You do it on your own and accept the consequences.’ If a new situation rises after Manbij, plans can change. In the Middle East everything changes overnight. For example, if IS launches a surprise raid and captures Azaz and turns toward Afrin, nobody can stop us. We won’t listen to anyone’s red lines. … At that point, both Russia and the US will support us.”

Developments signal a hot summer, and Kurdish designs are shaped by available opportunities. Ankara, with unpredictable moves, is still trying to discern whom to set up partnerships with in Syria. Then there are the changing fortunes of IS operations in Iraq and Syria. Russia is preparing to return to Syria with more effective combat forces, including ground elements. The Syrian army plans new attacks supported by Russia, Iran and Hezbollah toward Idlib, Raqqa and Aleppo.

All of these situations make it difficult to guess what tomorrow will bring in the Middle East.