Why Turkey is losing hope in Syrian border town of Azaz

Turkey is engaged in two battles to keep the Azaz-Marea line open after losing the Aleppo corridor. 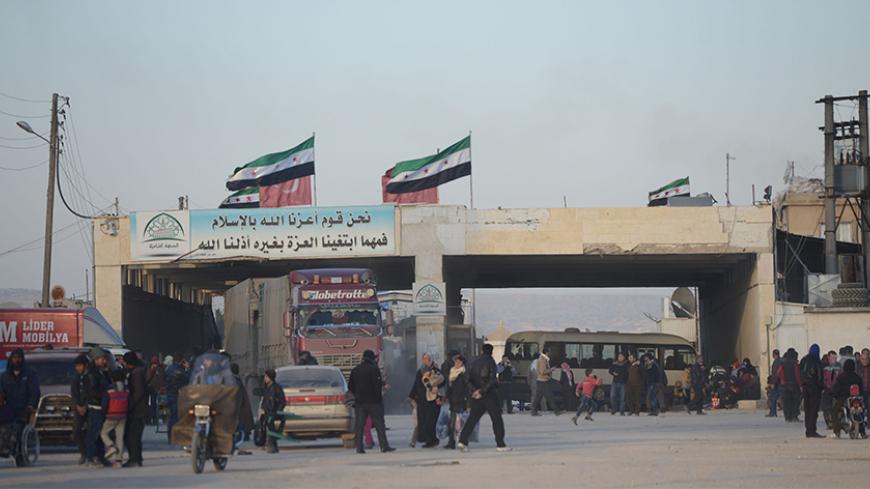 While speculation continues about whether Turkey and Saudi Arabia will march into the Syrian war, Turkey is already fighting on two fronts without even entering Syria.

In the first, Turkey is launching heavy artillery fire at Syrian Democratic Forces advancing toward Azaz in northwestern Syria, while declaring that the objective is to stop the advances of the Kurdish People's Protection Units (YPG). On the second front, Turkey is allowing militants to cross into Syria, since the Syrian army cut off the Aleppo-Kilis corridor.

Prime Minister Ahmet Davutoglu, when asked last week if Turkey would do anything to reopen the corridor, aroused curiosity by replying, “Wait for a few days; you will get your answer.” Naturally, his cryptic response fanned the debate over whether a military intervention is in the making.

Al-Monitor waited, and this is what we saw: The YPG first captured the Tishrin Dam south of Jarablus, Syria, crossed to the west of the Euphrates River and halted its advance. We are all aware that the Turkish government, to prevent the YPG from moving to the Jarablus-Rai region where the Islamic State maintains its only two border crossings to the rest of the world, had drawn a red line at the YPG crossing to the west side of the Euphrates.

But instead, the advance came to the east of Afrin toward Azaz. On Feb. 10, the YPG and Jaish al-Thuwar (Army of Revolutionaries), two allied SDF units, seized the Menagh air base south of Azaz and then the nearby villages of Maranaz, Malikiye, Der Jammal and Tell Acar.

On Feb. 13, the Turkish armed forces (TSK) began shelling the Menagh air strip, the four nearby villages and the Meryemine and Anabke villages attached to Afrin. Afrin’s center was hit by several shells. In shelling by 25-mile-range howitzers deployed at Yazibagi just west of Kilis, two civilians in Meryemine village were killed and six were wounded.

Turkey, however, made another move that is bound to be controversial. To reinforce Tell Firat, whose defenders were pressed hard, hundreds of militants were taken to Turkey from the Hatay-Reyhanli border and reinserted to Syria from Kilis. The Syrian Human Rights Observatory said 350 militants with light and heavy weapons were transferred to Syria through Turkey. Some of these reinforcements reached Tell Firat, but local sources talking to Al-Monitor on strict condition of anonymity said the number transferred may well be higher.

Sources on the ground cite one crossing point as the village of Bukulmez, attached to Reyhanli. Facing Bukulmez is the Syrian village of Atme, which is used as a logistical hub. A journalist from Afrin said, “A logistical route has been established between Atme and Azaz via Hatay and Kilis. There are also unconfirmed reports of ammunition resupply from Kilis to Azaz.”

On Feb. 13, the Hawar News Agency in Turkey reported four truckloads of ammunition were transferred to Syria via the Oncupinar/Bab al-Salam border gate. The agency distributed photos of crates marked "MKE11D201-016," which are used by Turkey’s state-owned ammunition maker. Local sources said another crossing used for the illegal transfer of militants via Turkey is the Yayladag border crossing, which has been visibly busier in recent days.

Syrian regime forces, with Russian air support, had seized the Shiite towns of Nubl and Zahra between Afrin and the village of Baskoy in the east, thus severing the main supply route from Turkey to Aleppo. For armed groups to maintain their control of the Azaz-Marea line northwest of Aleppo and Idlib depends on keeping the Bukulmez and Yayladag gates open for logistics. With Syrian army advances on Turkmen Mountain, that route has been sharply restricted. But crossing to rural Idlib and from there to the northwest of Aleppo is still possible.

Despite all these efforts, the fall of Tell Rifaat to the SDF could not be prevented.

The Syrian rebel group Jaish al-Uswar entered Tell Rifaat on Feb. 15. The next day, Ahmed al-Omar, the group's spokesman, said it had cleared Tell Rifat after four days of battles. Tell Rifaat was a key point for logistics operations between Aleppo and Turkey.

After Tell Rifaat, SDF units captured the villages of Ain Dejne, Kfar Naya and toward Azaz and then entered Marea.

As these field developments unfold, so does the debate on what Turkey is hitting and why. The government came out with three justifications for shelling the Azaz area. Hurriyet cited a report that was distributed at the state's top echelons. It said:

While discussing these three justifications, one must clarify what force captured the Menagh air strip and the nearby villages. According to Kurdish sources in Afrin who spoke with Al-Monitor, in these operations the YPG provided logistics and weapons support to Jaish al-Thuwar, which was the key force of the operation. But although the flag they flew was that of Jaish al-Thuwar, it doesn’t mean YPG was totally excluded.

Who makes up Jaish al-Thuwar? Established in May 2015, some of its fighters were in the US-supported, but then disbanded, Hazm Movement and the Syrian Revolutionaries Front. Cephed al-Akrad (the Kurdish Front) — made up of Kurds who had not joined the YPG — is another unit of Jaish al-Thuwar. The Seljuks Brigade and Sultan Selim Brigade of Turkmens, which operate separately from the Turkish-supported Turkmen forces, are also part of Jaish al-Thuwar. An alliance of Arabs, Turkmens and Kurds, Jaish al-Thuwar joined the YPG-led Syrian Democratic Forces in October 2015. Most of the fighters hail from settlements on the Azaz-Marea line and areas of Menbic, al-Bab and Jarablus currently controlled by IS. It isn't accurate to call Jaish al-Thuwar fighters outsiders.

After capturing areas near Azaz, the YPG left them to the control of Jaish al-Thuwar and withdrew to Afrin. Some observers in the Turkish government circles interpreted the move as the YPG using Jaish al-Thuwar as a cover. This may be a bit of an overstatement, as the Americans function as a coordinator between these two SDF units.

As for claims that Jabhat al-Nusra is not present at Azaz, we have to realize that since Jabhat al-Nusra was added to the UN terror list, it has not been flying its flag in areas close to the Turkish border. In addition to its concentration in rural Idlib, Jabhat al-Nusra also has a presence north of Aleppo, in the Turkmen regions of Latakia and Azaz. Jabhat al-Nusra has significant mobilization capacity in these areas. Everyone following the developments in the region knows that the group is active not only on the Syrian side of the border but also in Turkey’s Kilis and Hatay. According to a relief worker at Yayladag, “Nusra people are considered local residents. They can cross the border anytime.”

Jabhat al-Nusra generally operates with Ahrar al-Sham in these areas.

A journalist from Afrin told Al-Monitor that reports from last year that Jabhat al-Nusra had handed over its Azaz positions to Jaish al-Sham were false. He said, “You can tour all of Syria without finding any symbol of al-Nusra's presence. But they are everywhere. They conceal themselves in Ahrar's ranks.”

Meanwhile, the Turkish government is working hard to persuade the international coalition to agree to a ground operation that would risk a clash with Russian and Syrian forces. But developments on the ground threaten to upset Turkey’s game plan.