Russia, US and the Kurds: The friend of my enemy is — wait, what?

While the world squabbles over who is helping or should help Syrian Kurds, the Kurds aren't turning down aid from any quarter. 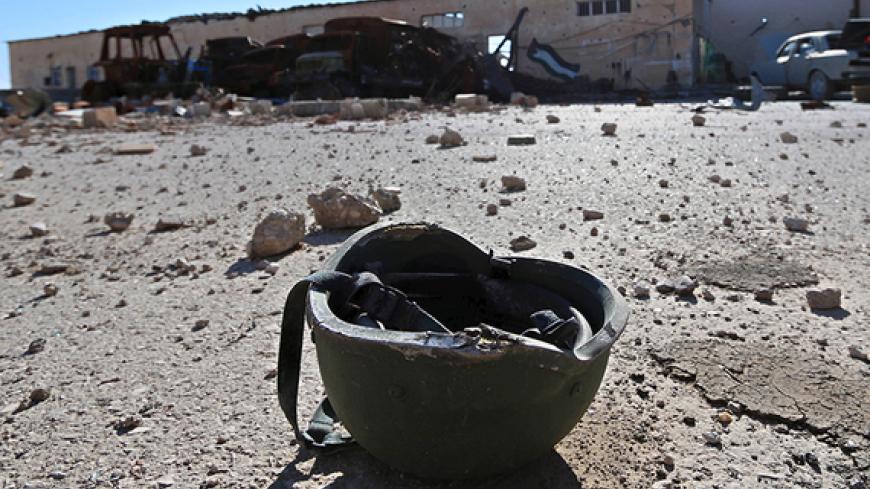 A helmet belonging to an Islamic State militant is seen on the ground after fighters from the Democratic Forces of Syria took control of a base in the town of al-Melabiyyah, south of Hasakah city, Syria, Nov. 24, 2015. - REUTERS/Rodi Said

The rumors and subsequent denials of competition between Russia and the United States over Syrian Kurds are beginning to resemble a game of Clue: Who did what, with what, to whom and where?

Some recent reports have Russia providing ammunition and coordination to the Rojava (Syrian Kurdistan) armed forces, known as the People's Protection Units (YPG). Other reports beg to differ.

Mohamed Ala, YPG press spokesman at Afrin, told Al-Monitor, "Russia has not sent any troops or ammunition to Afrin. During recent attacks by jihadi groups at Tell Firat, we didn’t get any assistance from regional and international parties. Here, I am talking of Russia and the Syrian regime. Is it logical for that regime to help us out at Afrin when the Syrian army is fighting us at Qamishli and Hasakah?”

Yet according to information reaching Al-Monitor, Salih Muslim, co-chair of the YPG-affiliated Democratic Union Party (PYD), met Russian officials in Geneva last week and complained that Russia has been constantly saying it will support the YPG but to this date hasn't done so.

Al-Monitor contacted sources in Rojava who did not deny earlier Russian support, but they did not want to comment on the recent reports. Some Kurdish sources noted that even if there had been Russian support, Kurdish officials wouldn't acknowledge it, so as not to jeopardize their developing relations with the United States.

The Americans recently prepared a military base near Rimelan in northeast Syria; now a smaller base at Kobani is nearly ready, which raises questions about what Russia might do to counter the American moves. The Wall Street Journal reported April 21 that Russian soldiers had arrived in Afrin to fight alongside the Kurds and maintain a presence in the region by making weapons, ammunition and oil deals with some Kurdish groups. The paper said the Kremlin also acknowledged providing weapons to Kurds in Iraq.

Regardless of whether Russia has provided ammunition to Kurds in Afrin, it is undeniable that Russian air attacks have opened the way for the Kurdish reinforcements to advance. Russian involvement since Sept. 30 has allowed the Kurds to improve their defensive lines at Afrin and Aleppo, which were under severe pressure. Kurdish sources said last year that while the YPG and Jaish al-Suwar were capturing Menagh air base east of Afrin, Russian planes hit the positions of Ahrar al-Sham and its allies. The Syrian villages of Aqlamiyah, Deir Jamal and Mareanar, which were abandoned by Jabhat al-Nusra and its allies under Russian aerial attacks, were taken over by Syrian Democratic Forces (SDF) led by the YPG. Also, Russia's bombardment in the SDF’s capture of Tell Rifat is widely known.

Earlier, the Syrian army had recaptured the Shiite towns of Zahra and Nubul abutting Afrin that had been besieged by the opposition for three years, thus opening a corridor toward the east. The YPG, on its side, advanced from west to east and established Kurdish control of some villages.

“I don’t know the latest situation, but Russians delivered weapons to Afrin before the Zahra-Nubul offensive. Russians had already admitted delivering 5 tons of ammunition to Sheikh Maksoud [a neighborhood of Aleppo]. No doubt there is coordination between the YPG and Russian forces in all fronts including Jazeera, Aleppo and Afrin," a humanitarian relief worker in Rojava told Al-Monitor.

Intelligence information on Russia’s airdrop of ammunition to Afrin was discussed in the Jan. 27 meeting of Turkey’s National Security Council. According to information leaking from that meeting, Russia and Iran in January had delivered ammunition to Afrin seven or eight times. Their goal was to enable the Kurds to advance from Afrin toward Jarablus by ignoring Turkey’s red line against Kurds crossing to the west of the Euphrates River.

But there were countermoves to the Kurds' expansion of their control over the area the Gulf countries and the West wanted to dominate. There has been no letup since February in attacks against Kurdish-populated Sheikh Maksoud and Afrin by the opposition forces supported by Turkey, Saudi Arabia and Qatar.

Russia helped ease the pressure on Kurds by bombing the positions of opposition forces encircling Sheikh Maksoud. The Kurds are not denying this assistance.

Just as reports were increasing that the Syrian regime was assisting the Kurds, in a totally unexpected development the Syrian army attacked the Kurds in Sheikh Maksoud April 23. Kurdish sources said the army attacked either by mistake or in retaliation for clashes between YPG security units and army-backed National Defense Forces in Qamishli.

Another reason for increasing pressure on Sheikh Maksoud and Afrin is the Kurds' plans to open a corridor through that area. Kurds who cannot open a corridor that would link Kobani and Afrin because of Turkey’s red lines now seek to create a safe route between Sheikh Maksoud and Afrin. Such a safe route would also serve to sever the logistics connection between the opposition forces in Aleppo and Turkey. For the time being, the Syrian regime is inclined to see the Kurdish resistance in the region as serving its interests. Just like the Syrian regime, Russia is not disturbed by the YPG and its allies taking over areas abandoned by groups supported by the West and Gulf states — as long as they don’t initiate fighting against the Syrian army.

According to field reports, counterattacks by Jabhat al-Nusra and its allies are delaying the Kurdish corridor plan. In the latest clash between the two sides at Tell Rifat’s Ain Dana, 11 SDF and 60-80 Jabhat al-Nusra militants were reported killed.

In short, in Syria there exists a rare configuration of war. This makes it difficult for the fighting parties and their foreign sponsors to implement their plans. Simply put, while the Pentagon is supporting Kurdish groups fighting the Islamic State around Kobani, Qamishli and Hasakah to the west, in the northeast of the country some CIA-equipped and trained opposition groups are attacking the Kurds and Salafi groups. Russia hopes that the YPG-PYD group it is helping will enable the Kurds to get closer to Damascus. US hopes are totally to the contrary. As for the Kurds, their game plan is to assist the United States and its allies in one place, Russia and the regime someplace else and other rebel groups elsewhere.