Turkey making itself at home in Syria

Turkey is looking less like a visitor in northern Syria as it sets up more permanent facilities and resettles Turkmens in certain areas. 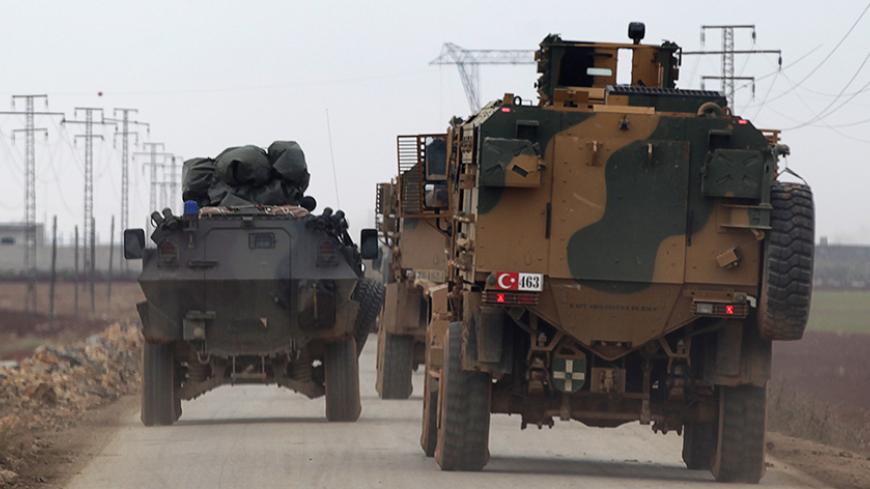 Turkish military vehicles drive in the Syrian rebel-held town of al-Rai, as they head toward the northern Syrian town of al-Bab, Syria, Jan. 4, 2017. - REUTERS/Khalil Ashawi

Turkish President Recep Tayyip Erdogan’s favorite slogan when defending Operation Euphrates Shield and other cross-border actions in Syria is, “If you are not in the field, then you will be on the menu.”

To be in the field, to get a place at the table, is his way of summarizing Turkey’s interventionist foreign policy that relies on hard power. Nowadays, Turkey’s activities in the Syrian turf it controls between Jarablus-Azaz and al-Bab signals it has more on its mind than combating the Islamic State (IS).

Turkey launched Operation Euphrates Shield on Aug. 24 with a green light from Russia, and it officially concluded it March 29 under Russian pressure. Now Ankara has resumed the operation with actions against the Kurdish People’s Protection Units (YPG), in addition to its missions of restoring security and rebuilding a civilian administration. The area cleared of IS is now controlled by militias recruited by Turkey's national intelligence service (MIT) from various opposition groups. The Turkish military supports the militias in this area, where Turkey's presence looks more permanent each day.

According to Turkey’s pro-government news media, almost a million people so far have returned to their homes in the area cleared of IS, or have been relocated there from other areas. At least 200,000 of these people live in Jarablus, in the midst of myriad projects Turkey is implementing. Some 500 police trained and paid by Turkey are now on the job in that area. Turkey also has hired some Syrian legal professionals, selected in coordination with Turkey’s Ministry of Justice, to work as judges and prosecutors. Turkey’s Ministry of Education employs 500 teachers there, and its Ministry of Health has hired 20 doctors. Turkey has even involved itself in religious matters through the Turkish Religious Affairs Foundation, which has opened an office near the Azaz border crossing.

Syrian Kurdish sources say the Turkish army has activated 10 bases and outposts in the areas of Akhtarin, Marea and al-Rai.

After peace talks in Astana, Kazakhstan, the press in May reported clues of what Turkey intends to accomplish in the Jarablus and al-Rai pocket: “Turkey is getting ready to send troops to Idlib to implement the four deconfliction zones and is now in the process of creating a Syrian task force. Turkey, in addition to ensuring security, will spearhead setting up local councils and residential, hospital, schools and other construction projects. Turkish soldiers based in the area will train about 10,000 Free Syrian Army [FSA] militants who had participated in the Euphrates Shield operation in a step to transform the FSA to a regular army.”

Some see Turkey's aggressive presence as an "occupation," and others call it a "humanitarian intervention." But aspects of it are not reported by the pro-government media, such as:

Hajj Ahmed is the commander of Jaish al-Thuwar operating west of the Euphrates, in the area the Kurds call Sheba. According to Ahmed, who cooperates with the US-supported Syrian Democratic Forces, the umbrella organization to which the YPG belongs, the Turkish army has emptied 70 Kurdish villages, repopulating them with opposition members and their families brought in from other regions by Turkey. This “demographic intervention,” as Ahmed calls it, took place in villages attached to Kabbasin, al-Rai, Jarablus and Azaz.

Two local sources confirmed to Al-Monitor the demographic intervention activities. According to them, the new settlers are Turkmens who fled Iraq’s Tal Afar and Syrian opposition militants and their families who were evacuated from the Waer district of Homs.

According to Turkey’s state-owned Anadolu News Agency, the evacuation from Waer was carried out in nine convoys. Two convoys settled in refugee tenements at Idlib, and seven others were accommodated at Jarablus camps.

According to the pro-Kurdish Firat News Agency, opposition fighters and their families that were evacuated from Hama and Homs were settled in the villages of Kabbasin, Susinbat, Numan, Kubbe Sheikh, Shedud, Keiba, Bilih and Sheikh Jarrah. The key locations targeted as part of the plan to change the demography are Sheikh Sisal, Hasakah, Tel Medic, Seed Sheba, Aim Deane, Minning and Meraanaz.

Kurdish sources claim it was the Turkmen Muwahhid Army that forced the people of Numan to abandon their homes and that settled 200 Turkmen families transferred from Homs. The Sultan Murad Brigade and Jaish al-Islam expelled residents from several other villages.

Some of the people who sought refuge in Kurdish-controlled Afrin are from these villages. As of April 2, 460 people from al-Bab, Jarablus, Tabqa and Raqqa took refuge in Afrin. Kurds say these villages were identified as key points to control the envisaged corridors between the Kurdish cantons. Of course, for Turkey, the most vital goal of Operation Euphrates Shield was to foil attempts to set up a corridor between the autonomous Kurdish areas of Kobani and Afrin.

According to Kurdish sources, some Turkish-supported organizations seized the homes of people the groups accused of colluding with Jaish al-Thuwar at al-Rai. The organizations, the sources said, included Ahrar al-Sham, Mutasim Billah, Ahrar al-Sharqiya, Sultan Murad, Suleiman Shah and Failaq al-Sham, all supported by Turkey.

Areas controlled by the YPG and allies are frequently shelled. For example, on May 13 the villages of al-Midyek, Hesiye and Semuga came under fire. Mehmet Helawi of the Sheba Administration Council said the Turkish army razed 25 Kurdish villages and set up military posts in many others.

The Kurds' problems aren't the only problems in the region. Police trained and employed by Turkey are not very effective in controlling the area. After IS was expelled, it didn’t take long for the organizations working with Turkey to start fighting among themselves to control the area and its resources.

On Feb. 22, near the Sico Camp, nearly a mile north of Azaz, clashes took place between the Sultan Murad Brigade and Ahrar al-Sham. On May 5, Ahrar al-Sharqiya and the Hamza Brigade clashed. Seven people were killed.

On May 14, Ahrar-al Sharqiya and the Sultan Murad Brigade clashed at Gandura over smuggling privileges. On the same day at Jarablus, Ahrar al-Sharqiya and Failaq al-Sham went after each other. Turkish soldiers contained both clashes.

It is not really clear who controls what in the area, or how. Nevertheless, propaganda that says Turkey is bringing state law and order to the region is in full swing.