Erdogan's plans for Afrin might not sit well with Syria

Turkey's president is talking about settling Syrian refugees in Afrin, suggesting that Kurds are not the dominant community there, and handing over the region to anti-regime groups. 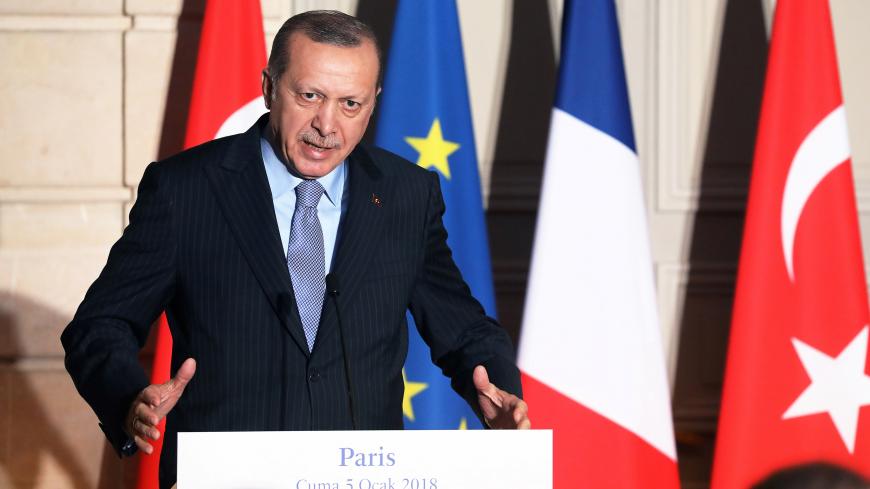 As casualties rise on both sides in Turkey's offensive in Syria, Ankara is pursuing a plan that goes beyond putting an end to the domination of the Kurdish People’s Protection Units (YPG). President Recep Tayyip Erdogan incessantly refers to a project to settle "the real owners of the area" in Afrin province.

He has two groups in mind: the band of militias that the Turkish Armed Forces (TSK) employs in the field called the Free Syrian Army (FSA), and the crush of Syrian refugees in Turkey.

Explaining his plans for Afrin at a Jan. 24 meeting at the presidential complex, Erdogan said, “First, we will wipe out the terrorists and then make the place livable. For whom? For 3.5 million Syrians who are our guests. We cannot forever house them in tents.”

Erdogan claimed, “In Afrin, 55% are Arabs, 35% are Kurds and the rest are Turkmens.” But Afrin has always been a Kurdish-dominated area. Although reliable figures aren't available, local sources insist that the Kurds constitute 70-90% of the population. In Afrin and its rural periphery, where Kurds make up the overwhelming majority, there are some Arabs, small groups of Turkmens in the northern rural area, Alawite Kurds in Mabata, Yazidi Kurds in Kastel Cindo and Ezaze and minor groups of Armenians and Circassians. With its longstanding relative stability, Afrin became a refuge for people escaping the Islamic State from Raqqa, Manbij, al-Bab and Jarablus.

Local officials told Al-Monitor that the population in Afrin‘s seven townships and 365 villages once stood at 400,000 but has nearly doubled with the refugees. In other words, until now Afrin has not been a source of refugees, but a recipient.

In addition to Turkey's ruling party, there are other quarters who support the idea of settling more refugees in Afrin. For example, former Chief of General Staff Ilker Basbug told Hurriyet news, “If Afrin is cleared of YPG and the PKK [Kurdistan Workers Party, which Turkey considers a terrorist group], we can easily settle some of those who had escaped to Turkey.” His comments drew broad interest.

Erdogan’s blatant misinformation and desire to settle refugees there raises the disturbing question of whether this is a plan to modify the demographic structure of this heavily Kurdish-populated area. Such schemes have often been used as a means to eliminate social restlessness against the government since the Ottoman days.

The plan to settle in Afrin the anti-Syrian government FSA elements — as was done after Operation Euphrates Shield ended in March — is also disturbing The ​TSK says it has 25,000 FSA elements fighting alongside it. Erdogan recently said, “We will succeed in this operation with God’s blessing, together with our nation and the Free Syrian Army.”

Erdogan then detailed his FSA thinking: “The opposition elements believing in Turkey will participate in this operation, this struggle is for their benefit. We are helping our brothers to own their own land.”

On Thursday, Kurdish authorities asked Damascus to send troops to “protect its borders with Turkey from attacks by the Turkish occupier.”

It worries many people that even as Erdogan claims to be ridding Afrin of "terrorists," that's how Syria describes some of the groups he wants to move into the area. Many have backgrounds, ideologies and attitudes that are unfavorable to Kurds. Those groups include former al-Qaeda members, Salafi jihadis, a variety of Islamists such as the Muslim Brotherhood, mercenaries and some volunteers controlled by Turkey's National Intelligence Organization (MIT).

Abu Muslim, a commander of Jabhat al-Shamiya, said, “Our first goal is to expel the separatist parties from Arab villages.”

These groups are attacking from all directions.

Some Kurds who oppose the YPG also are taking part in the operation against Afrin. To illustrate that this is not a war against Kurds, Turkey plays up the participation of Jaish al-Nihbe, which has Kurds in its ranks. Turkey’s state-run Anadolu Agency quoted the commander of that group, Azad Shabo, as saying, “We are Kurds. Not all people of Afrin are Kurds. Everyone there is waiting to be liberated from the PKK. Afrin’s Kurds do not support the PKK. We fought against the regime and [the Islamic State] and now we are fighting the brutality of the PKK. We started from Afrin and God willing, we will go as far as Qamishli.”

After Operation Euphrates Shield, Turkey began training and equipping some of these groups in camps set up near the Turkish border. Military sources told Anadolu that FSA militants were trained in combat skills including firing mortars, rockets and machine guns.

Under Turkey’s guidance, 30 of these groups were organized as three corps and labeled the Syrian National Army. Turkey encouraged Syrian refugees in Turkey to join the Afrin operation. About 70 refugees from the Suruc tent city enrolled in the FSA. About 200 Turkmen refugees living in Osmaniye went to the Turkish army recruitment office to sign up for the FSA.

Salafist and jihadi leaders have expressed their support for the Afrin operation, above all Saudi Sheikh Abdullah al-Muhaysini. Also, Ali al-Karadagi, secretary-general of the Global Union of Muslim Thinkers, declared, “I am standing against the US-Zionist project that wants to seed sedition among Muslims. We support Turkey’s right to defend its people and borders with legitimate tools.”

Turkey faces abundant risks by intervening in Afrin. Ankara's actions — especially concocting plans to change the demographic structure of the area and resorting to the use of problematic groups deemed terrorists by Damascus — warn of a dead end ahead.