In its intervention, Turkey is capitalizing on Kurdish fighters affiliated with the Free Syrian Army who want to liberate Afrin from Kurdish rivals. 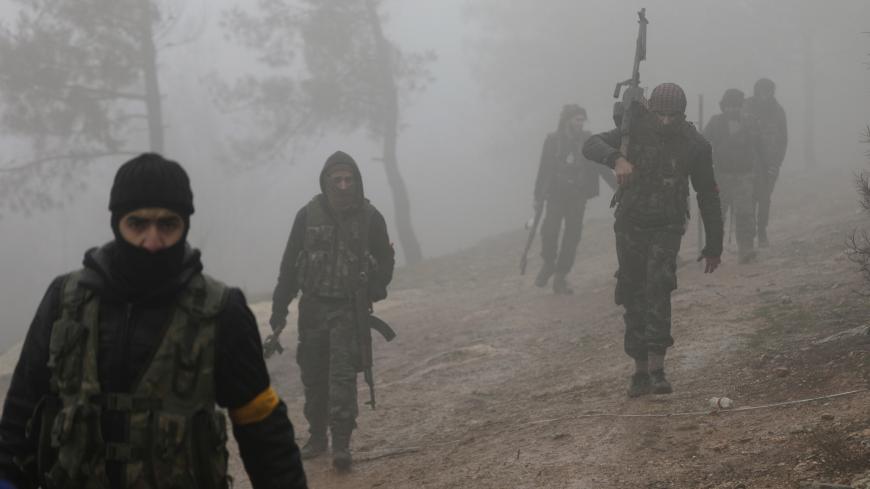 ALEPPO, Syria — The Free Syrian Army (FSA) and Turkish forces have made remarkable advances against the People’s Protection Units (YPG) in Afrin. According to the Turkish command, Operation Olive Branch has managed to take control of seven villages and strategic locations in the Afrin countryside, including the main road connecting Rajo and Shaykh al-Hadid.

Several Kurdish factions affiliated with the FSA are participating in Olive Branch, launched Jan. 20, to fight the YPG — the armed wing of the Democratic Union Party (PYD) controlling Afrin in the northwest of Aleppo.

Kurdish fighters in the FSA had participated in Turkey's Operation Euphrates Shield to expel the Islamic State from north Aleppo between August 2016 and March 2017. But their inclusion in Olive Branch could be more about the demographic composition of the region, which is mostly Kurdish. The Kurdish-speaking fighters no doubt make it easier to work with the local population and belie YPG allegations that the battle has ethnic motivations.

Kurdish militants affiliated with the FSA said in a video posted a few days after the onset of the operation: “We, Afrin citizens, are participating in Operation Olive Branch against the PYD and the YPG to spare our people in Afrin injustice. This operation is dedicated to the citizens who migrated to Europe and the West to escape the tyranny of the PYD, and it is for the sake of our friends in jail, and for peace and freedom. Do not believe that we are abusing civilians or destroying their houses. We are here for your freedom and protection from injustice. We want to return to our land, liberate it and topple [Syrian President Bashar al-] Assad’s regime. Freedom is ours and our people’s.” The video shows six men wearing military clothes and holding weapons, with the flag of the Syrian revolution fluttering in the background.

Al-Monitor met with Ahmed Othman, head of the Sultan Murad Division, who said, “The YPG are lying to Kurds in Afrin and are telling them the battle is targeting them because of their ethnicity. The truth is that the FSA participating alongside the Turkish forces in Operation Olive Branch includes militants from different ethnicities like Arabs, Kurds and Turkmens. There are many Kurdish fighters in the ranks of the FSA, including brigade leaders and military fighters working on different battlefronts. We cannot say this battle is Kurdish-Kurdish or Arab-Turkish-Kurdish. Syrian Kurdish, Arab and Turkmen fighters are partaking to target an organization the FSA considers terrorist.”

Kurdish fighters affiliated with the FSA promise to liberate Afrin from the YPG and assert that the organization does not represent the Kurds. They believe that the YPG does not have the Kurds’ best interest at heart and that it is a tyrannical organization that arrests its opponents, confiscates property and forcibly mobilizes youths and the elderly and makes them carry arms to fight in its ranks.

Al-Monitor also met with Azad Shaabo, leader of Azadi Battalion, affiliated with the FSA’s Elite Army. He said, “Azadi Battalion includes around 100 Kurdish fighters affiliated with the FSA, and they are participating in Operation Olive Branch to liberate Afrin from the YPG. Afrin will return to the arms of the Syrian revolution and will win back the rights of its people. The YPG is no different from Assad’s regime. They have both practiced tyranny and murder against the Kurds. Operation Olive Branch will liberate Afrin’s inhabitants.”

Abu Maryam al-Hasakawi, field leader of the Martyr Mashaal Tammo Brigade, told Al-Monitor, “The villagers of liberated areas in Afrin were relieved by the presence of Kurdish fighters in the ranks of the FSA. They welcomed us because we told them we came only to fight the YPG. We will protect their lives and properties, and we will not meddle in their affairs. We told them they are our people and that we are here to liberate them from the YPG’s tyranny.”

Mohammed Hawash, leader of Saladin Brigade, told Al-Monitor, “There are 1,000 Kurdish fighters in the ranks of the FSA participating in the operation. We intend to increase this number during the second stage of the battle.”

He added, “The YPG is a terrorist organization that killed Kurds and left them homeless. It forbade them from joining the Syrian revolution and bred tyrannical regimes. … The YPG does not represent Kurds in Syria, and the operation in Afrin paves the way for the liberation of the remaining Syrian lands from any form of terrorism. The FSA includes different ethnicities, and they all want a united and free Syria.”