Turkey and its allies among the Syrian rebel forces have intensified attacks on Syrian Kurdish fighters in northwest Syria as Turkey's buildup continues. 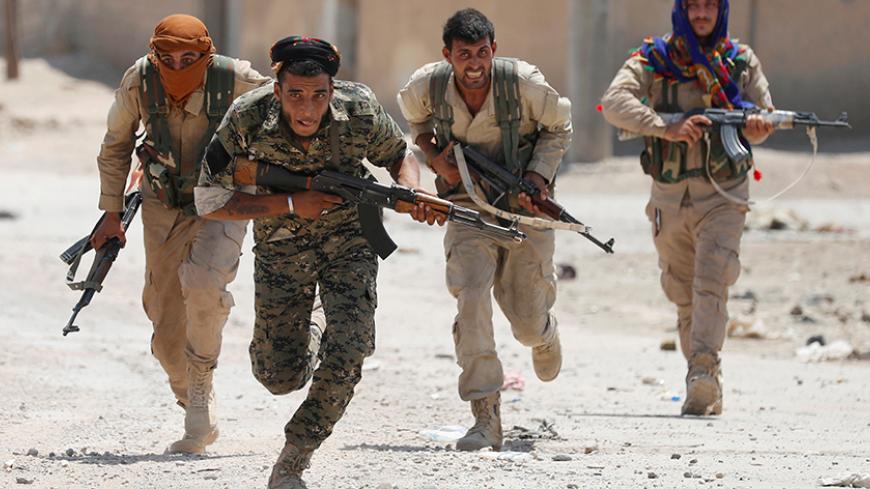 Turkey and its Syrian rebel allies have stepped up attacks against Syrian Kurdish fighters in northwest Syria, part of an effort to roll back the US-supported group known as the People’s Protection Units (YPG), which Turkish officials call a threat to Turkey’s national security.

The London-based Syrian Observatory for Human Rights reported that the clashes occurred around the village of Ain Daqna and Menagh, an air base north of Aleppo that is coveted by the Turkish-backed Euphrates Shield alliance. A commander from the Syrian Democratic Forces (SDF), the YPG-led multi-ethnic group that is currently fighting Islamic State militants in Raqqa, told Al-Monitor that the Turkish-inspired operations against the YPG were being directed from an area 6 kilometers (roughly 4 miles) south of the alliance-held town of Azaz.

“The YPG encircled the group and killed and wounded many of them,” said the commander, speaking on condition of anonymity. These claims were echoed by Rojhat Roj, a YPG spokesman who called the Turkish-backed rebels “mercenaries.” In a separate statement, the YPG said the attack had been successfully repelled by its allies in Jaish al-Thuwar. "The Defense Units in Rojava [northern Syria] have said repeatedly that they do not wish to fight Turkey or its proxies, but once attacked we will use our right of self defense, period."

At the same time, Turkish forces reportedly kept up a barrage of artillery attacks targeting the YPG-controlled enclave of Afrin. The Syrian human rights group said Turkish forces had fired on the outskirts of the city and its environs for a second consecutive day, causing fires and other material damage. Thousands of residents infuriated by the deaths of a woman and her two children allegedly as a result of Turkish actions have taken to the streets in Afrin. The pro-Turkish daily Sabah confirmed that Turkish shelling of YPG positions was ongoing, labelling it a response to YPG aggression. It remains unclear whether Turkish forces were firing from across the border or from within Syria.

Turkey is fiercely hostile to the YPG because of its tight links with the Kurdistan Workers Party (PKK) that is fighting for self-rule over Turkey's mainly Kurdish southeast region.

After a six-hour meeting today overseen by Turkish President Recep Tayyip Erdogan, Turkey's National Security Council noted in a statement that weapons given to the YPG "by various allied countries" had wound up in the hands of the PKK, proving Turkey's claims that the two organizations are one and the same. "We will never allow the establishment of a terror state along our borders,'" the statement read.

A Turkish buildup inside Syria is meanwhile reportedly continuing amid widespread speculation over a deal supposedly being cooked up between Turkey and Russia. In sum, Russia is pressuring the YPG to allow Syrian regime forces to assume control over Afrin. As things currently stand, having regime forces in charge of Afrin would be a far lesser evil for Turkey, because keeping Afrin truncated from the rest of the Kurdish-controlled territories that lie east of Manbij is Turkey’s strategic priority in northern Syria. It is no longer primarily concerned with overthrowing the regime.

Unsurprisingly, coalition officials do not want to be drawn into the fight and in private conversations remain dismissive of the claims that Russia is working against the Kurds in Afrin. There are several reasons for their reluctance. One is the coalition’s undeclared policy that what happens west of the SDF-run city of Manbij is really none of its business. The second is that if they became involved, it would force them to take a position, albeit it obliquely, against Russia — and by extension Turkey — over an issue that the United States and Russia see eye-to-eye on: that HTS is potentially as big a terrorist threat as IS.

But a senior YPG commander insisted in an interview with the Iraqi Kurdish news channel Kurdistan 24 that tensions with Russia were real. Bahjat Abdo said, “Russians say if we allow the Syrian regime forces [to] enter Afrin, they will stop the Turkish attacks.” He added, "We drove the Syrian regime out of Afrin five years ago, and it is impossible to allow them back.”

A source involved in talks between the Russians and the YPG in Afrin told Al-Monitor that the Russians had proposed deploying elite Chechen military police forces along the Afrin-Idlib border, a repeat of a similar deployment in Aleppo after the city fell under full regime control last year. The SDF commander called the proposal “unacceptable." “These are salami tactics. [The Russians] can place them [the Chechens] in regime-held areas, not ours,” he huffed.

The commander also expressed doubt on the notion that HTS would comply with any Turkish demands. “Taking Idlib will not be as easy as [taking] Aleppo. HTS will more likely escalate the war against regime forces,” he said.

Sam Heller, a Beirut-based analyst for the Century Foundation and a fluent Arabic speaker who closely monitors the Syrian conflict, concurs that any deal of this kind would be hard to pull off. He told Al-Monitor, “Turkey has limited real leverage over HTS, or at least leverage it can exercise usefully.”

He concluded, “Turkey doesn’t want an open military confrontation with HTS, but short of that, it can’t really make HTS comply with a Turkish-policed safe zone or another intervention against the YPG in Afrin.”