Turkey’s president has promised to widen Turkey’s military offensive in Syria despite US warnings, insisting that the Americans haven't kept their agreement to get the Kurdish militants to withdraw from Manbij. 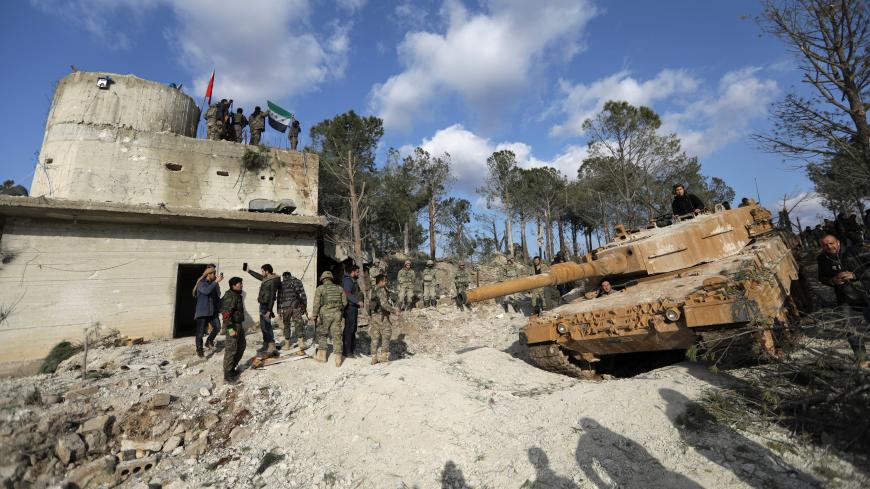 In a fresh display of defiance against the United States, Turkey’s President Recep Tayyip Erdogan vowed to expand Turkey’s military offensive against Kurdish militants in Syria today, saying territories under their control would be restored to their “rightful owners.”

Speaking to members of his ruling Justice and Development Party in the Turkish parliament, Erdogan bellowed, “They tell us, ‘Don’t come to Manbij.’ We will come to Manbij to hand over these territories to their rightful owners,” he said. Erdogan's "they" meant the United States, which has warned Turkey against moving against its top ally the Syrian Kurdish People’s Protections Units (YPG) in Manbij, a mainly Arab town west of the Euphrates River that was captured by the YPG and its Arab allies with the coalition’s help in August 2016.

Turkey insists that the United States betrayed its promise to get the YPG to withdraw from Manbij once it was liberated from the Islamic State (IS) and that it therefore reserves the right to take matters into its own hands there. Turkish anger ballooned when a spokesman confirmed that the coalition was training a border protection force drawn from the YPG to police Syria’s borders with Iraq and Turkey.

Erdogan’s repeated threats to attack Manbij have prompted a flurry of anguished commentary over a looming military confrontation between Turkey and the United States.

Jonathan Cohen, the US deputy assistant secretary of state who traveled to Ankara on Jan. 23, warned his Turkish counterparts against action in Manbij on the grounds that it would, among other things, undermine ongoing coalition operations against IS remnants holed up in the Middle Euphrates River Valley. Turkish media outlets reported today that national security adviser H.R. McMaster will travel to Ankara this weekend and that Secretary of State Rex Tillerson will follow him there next week. Syria is expected to dominate the talks.

The YPG has already begun diverting fighters from the US-protected stretch of territory under its control in the northeast to the Afrin region in the northwest, where a Turkish military offensive called Operation Olive Branch entered its 17th day. Both Western and Syrian Kurdish sources told Al-Monitor that the Syrian regime was allowing YPG forces to cross through its lines from Manbij to Afrin amid media reports that a “massive” YPG convoy had made its way to Afrin.

The Syrian government remains stridently opposed to Turkish military intervention, not least because of Turkey's close relations with jihadist and other opposition rebels, whom it backed in the hope of overthrowing Syrian President Bashar al-Assad. But it is also resisting Kurdish demands for greater autonomy, and the YPG’s alliance with the United States makes the Kurds all the more suspect. Tillerson’s recent assertions that US forces would remain in Syria for the foreseeable future to squeeze out Assad among other things will not have helped. Thus, for the regime, easing the Syrian Kurdish militants’ access to the front against Turkish-backed rebels serves the dual purpose of thinning both rebel and Kurdish forces and getting Turkey bogged down in Afrin. Turkish forces seem to be making dogged if snail-like progress toward their goal of establishing a buffer zone.

Casualty estimates claimed by both sides remain impossible to confirm.

But Operation Olive Branch got decidedly stickier after al-Qaeda-linked Hayat Tahrir al-Sham (HTS) militants claimed responsibility for the downing of a Russian Su-25 jet over Idlib on Feb. 3. As fellow Al-Monitor columnist Maxim Suchkov reported, some in Moscow are pointing the finger of blame at Ankara, whose relations with HTS remain an abiding source of debate. The last airstrikes confirmed by the Turkish Armed Forces against YPG targets in Afrin took place on Feb. 4. No more has been reported since, prompting conjecture that Russia, in a retaliatory move, had emptied the skies over Afrin, an airspace effectively under its control. Airpower is the single biggest factor playing in Turkey’s favor. “Without it they will be driven out in no time,” a commander in the YPG-led Syrian Democratic Forces claimed in a telephone interview with Al-Monitor.

Reports that regime forces had deployed new air defenses and anti-aircraft missiles to front lines in the Aleppo and Idlib areas suggest that Turkish jets are indeed being shut out. A commander in the military alliance fighting in support of Assad told Reuters yesterday, “They cover the airspace of the Syrian north,” calling it a “message to everyone.”

In what some analysts saw as a further sign of the unraveling of Turkey's Afrin agreement with Russia, Erdogan announced Turkey will not purchase defense systems from abroad except in cases of emergency. The analysts reckoned he might have been alluding to a multibillion-dollar deal to purchase Russian-made S-400 anti-missile batteries.

Russia is widely believed to have agreed to Turkish intervention in exchange for its help in allowing the regime to win back control of Idlib. The trouble is that Turkey sees its leverage over the rebels as its biggest trump card for continued influence in Syria, particularly against the Kurds. Yet until it relinquishes it, the regime and its Iranian allies will continue to subvert Turkish actions in Syria at every turn.

A Western diplomat speaking to Al-Monitor on condition of anonymity contended that the regime was “very unhappy” with Russia for giving Turkey the green light. The official predicted, “Russia will rein in [Turkish intervention]. The question is when and at what price.”