Experts list the possibility of confrontation between Turkey and Syria, a new influx of refugees and activity by radical groups as potential hazards of Turkey’s deployment into Idlib. 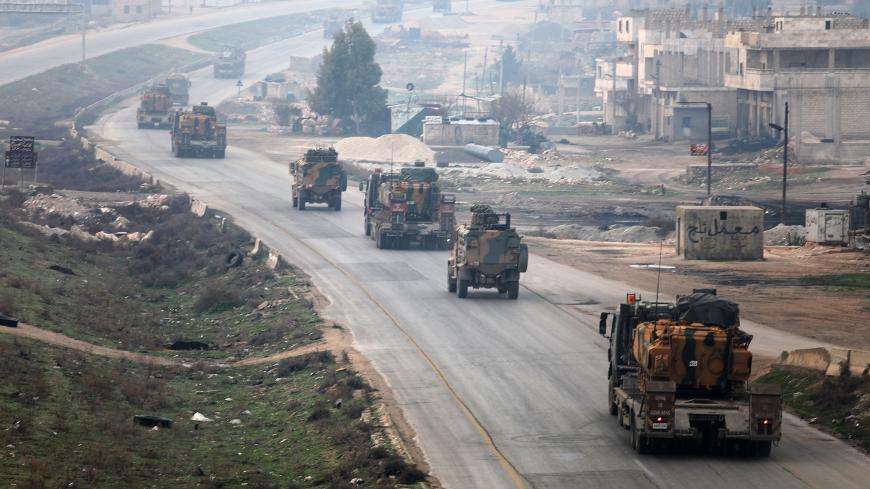 Turkey established its 12th and last military observation post in the opposition-held regions of Idlib province, in northern Syria, last week. The deployment of Turkish forces is based on an accord with Russia and Iran, which was agreed upon in Astana in September 2017, to establish “de-escalation zones” between opposition fighters and regime forces.

These zones give Turkey another military foothold in Syria just south of Afrin, which was captured from the Kurdish People's Protection Units (YPG) by the Turkish army and Free Syrian Army fighters in March.

President Recep Tayyip Erdogan declared in January that Turkey would also control Idlib, with a view to settling Syrian refugees and displaced persons there, after the Turkish army completed its Operation Olive Branch in Afrin.

While Turkey appears to have made more military headway in Syria in this way, questions are being raised as to whether Ankara may be walking into a trap of its own making in Idlib.

Sedat Ergin, a veteran foreign policy commentator for daily Hurriyet, has pointed to the potential hazards facing Ankara there. “It’s possible to say that the mission by the Turkish army in Idlib is the riskiest cross-border operation it has undertaken to date,” Ergin argued in an article analyzing the establishment of the 12th de-escalation zone last week.

Ergin also pointed out that neither Russia nor Iran have fulfilled their part of the accord regarding these zones yet. Under the agreement, they should have established their own zones by now, opposite those set up by Turkey.

Those zones will be necessary to ensure that the Turkish army and Syrian regime forces do not face off, should Syrian President Bashar al-Assad decide to go after opposition forces in Idlib.

Having made serious advances against the opposition in and around Damascus, as well as in northern Syria, the possibility that an emboldened Assad may decide to move on Idlib cannot be taken lightly, according to Ergin.

Retired Brig. Gen. Naim Baburoglu believes Russia and Iran would prevent a direct confrontation between Turkish and Syrian regime forces. “Moscow and Tehran have concrete interests in maintaining good ties with Turkey, which they can’t afford to endanger because of developments in Syria,” Baburoglu told Al-Monitor.

He was nevertheless cautious with regard to the possibility that Assad might defy Russia and Iran and target opposition forces in Idlib. Baburoglu said that should Assad go down that path, it would also result in a new influx of refugees to Turkey, apart from risking a Turkish-Syrian confrontation.

The population in Idlib is currently said to be around 3 million, of which 1.5 million are reportedly internally displaced Syrians. Turkey is already playing host to 3.5 million Syrians, and it can’t afford another mass influx of refugees. Ankara’s hopes to resettle some of the refugees in Turkey in Idlib could, therefore, be shattered, leaving it to face hundreds of thousands of new refugees just as it was hoping to reduce the number of those it already hosts.

Another potential risk for Turkey in Idlib, according to Ergin, is the fact that the opposition forces arriving there from parts of Syria that were lost to the regime include Salafist and jihadi groups.

The presence of al-Qaeda-affiliated groups establishing themselves along the Turkish border is also a potential time bomb for Ankara, which has suffered a number of deadly attacks from the Islamic State in recent years.

How Ankara plans to manage groups like Hayat Tahrir al-Sham (HTS), which is listed as a terrorist organization by the United States and Russia, and prevent them from entering Turkey as refugees is still not clear.

“The responsibility undertaken by Turkey in Idlib inevitably brings up the question of how relations between Turkey and the HTS will develop,” Ergin wrote.

According to at least one Western diplomat, Russia and Damascus are hoping to concentrate radical groups in areas held by Turkey. “It looks as if they want to transfer the responsibility of keeping these groups in check to Ankara,” the Western diplomat told Al-Monitor on condition of anonymity.

This issue is also problematic for Turkey because it is already being accused by many in the region, and the West, of supporting radical groups in Syria, a charge that Ankara denies.

Groups like HTS appear set to create serious headaches for Ankara should they start staging attacks against regime forces from within Turkish-controlled de-escalation zones.

However, the real problems for Turkey in Idlib, and indeed in other parts of northern Syria where Turkish forces are deployed, will begin when the Syrian crisis moves to the political settlement and constitution drafting stage, according to Baburoglu.

Baburoglu pointed to Russian President Vladimir Putin’s remarks, after his surprise meeting with Assad in Sochi on May 17, which reportedly concentrated on constitutional issues pertaining to a final political settlement in Syria.

“We proceed from the assumption that in view of the significant victories and success achieved by the Syrian army in its fight against terrorism, and the start of a more active phase of the political process, foreign armed forces will be withdrawing from the territory,” Putin said after his talks with Assad.

Baburoglu said “Putin’s assumption” applies as much to Turkey as it does to the United States and France, or any country not invited to Syria by the regime.

Erdogan reprimanded Russian Foreign Minister Sergey Lavrov recently after Lavrov said Turkey should hand over Afrin, which it now controls after defeating the YPG there, to the regime.

Erdogan blasted Lavrov, saying that Turkey would decide when, how and to whom it would transfer Afrin.

“Of course neither the US nor France nor Turkey will pull out of Syria anytime soon, given that the Syrian crisis still has a long way to being resolved,” Baburoglu said.

“Russia will nevertheless try and ensure that the Turkish military does not hold Idlib to serve Turkey’s specific interests in Syria,” he added.

Baburoglu also believes that Ankara has more vital issues to deal with in Syria than Idlib, especially in the city of Manbij and the large swath of land east of the Euphrates River stretching to the Iraqi border.

These areas are held by the US- and French-backed YPG, which Erdogan has vowed to expel from along the whole of Turkey’s long border with Syria.

“Turkey’s mission to rid Manbij and east of the Euphrates of the YPG appears to have fallen to the background with the elections. But once these elections are over, these issues will resurface,” Baburoglu said.

He added, “The situation in Idlib may contain potential hazards for Turkey, but it is not the most urgent issue for Ankara today, given the headway made by the YPG in other parts of northern Syria.”

Given the ever-changing circumstances on the ground in Syria, where new and unexpected developments continue despite Turkey’s introversion due to the upcoming elections, the Idlib deployment may yet turn out to be the “the riskiest cross-border operation it has undertaken to date,” as Ergin suggested.