Is a storm brewing for Turkey in Idlib?

The increasing presence of jihadis in the last remaining opposition enclave is giving Bashar al-Assad a pretext to threaten an attack on the region where Turkish forces are also deployed. 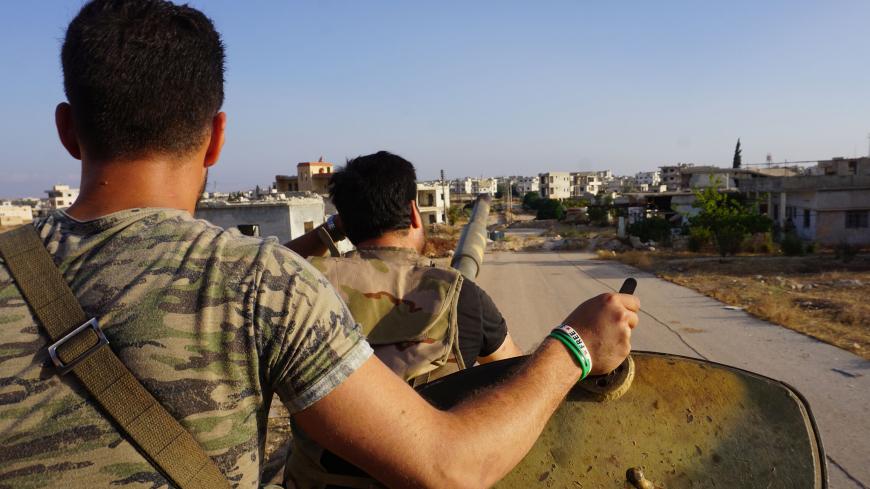 Ankara is focused on multiple issues in Syria, where events are not moving in "the desired direction" for Turkey, to quote President Recep Tayyip Erdogan. One area Ankara is concentrating on with growing concern is Idlib, a region where "anything can happen at any time," according to Erdogan.

Syrian President Bashar al-Assad repeated last week that Idlib, the last major opposition enclave, will be the Syrian army’s next target now that its mission in the south is all but concluded.

“Now Idlib is our goal, but not just Idlib,” Assad told the Russian media. Pointing to opposition-controlled regions in eastern Syria they planned to move on to, Assad nevertheless indicated that Idlib was a priority.

“The military — and it is at their discretion — will decide priorities and Idlib is one of these priorities,” he said.

As he was departing for South Africa to attend the BRICS summit last week, Erdogan told reporters in Ankara that he would discuss the matter with Russian President Vladimir Putin in Johannesburg.

Turkey deployed observation units in de-escalation zones in Idlib earlier this year under an accord arrived at in Astana, Kazakhstan, last year between Moscow, Ankara and Tehran.

The prime task of the observation units, according to the Astana agreement, is to prevent clashes between opposition groups and the Syrian army.

Many believe that this deployment is also part of an effort by Ankara to gain another military foothold in the region, to clear northern Syria from the Kurdish People’s Protection Units (YPG), which Turkey considers a terrorist organization.

Ankara has also been monitoring statements by unnamed Syrian officials to the pro-government Russian media. These suggest that the Syrian military is actively preparing a major offensive on Idlib in the coming weeks.

Erdogan has warned that such an attack could “completely destroy the Astana accord.”

Ankara is also worried that an attack on Idlib will provoke a new influx of refugees, at a time when it is hoping to stabilize the region to start repatriating some of the 3.5 million Syrian refugees Turkey already hosts.

Ankara is looking to Moscow to prevent any attack on Idlib. Talking to reporters in Johannesburg, Erdogan said he had discussed the matter with Putin during their meeting on the sidelines of the BRICS summit.

“I asked for the necessary intervention by him on this subject. My hope is, God willing, he will do what is necessary,” Erdogan said.

The extent to which Ankara can rely on Moscow to rein in Assad is not clear, though. Russia also sees Idlib as a hotbed of terrorism.

"The situation in Idlib is very difficult; it has the biggest concentration of militants and terrorists,” Alexander Kinshchak, Russia’s ambassador in Damascus, told reporters recently.

"It is exactly from this zone that combat UAVs [unmanned aerial vehicles] fly towards Khmeimim [Russian air base near Latakia], creating a real danger to us," he said.

Turkey’s problem is that the Astana accords exempt groups that are listed by the UN as terrorist organizations from being attacked. Hayat Tahrir al-Sham (HTS) is one of these groups, and Russia, which considers it a legitimate target, has actively aided Syrian regime strikes against the group in Idlib.

Sedat Ergin, a leading foreign policy commentator for daily Hurriyet, acknowledges that Turkey is in a difficult situation in Idlib but said Russia’s position is no less complicated.

“Putin can’t afford to disregard Ankara’s requests, given Russia’s vast political and economic interests in Turkey,” Ergin told Al-Monitor. He pointed to Russian investments in the nuclear energy and natural gas sectors as examples of some of these interests.

“Turkey is currently undergoing a historic breakup with the West. Putin would also want to stay away from steps that could push Ankara back onto the West’s lap,” he added.

Ergin said Moscow is searching for a delicate balance between Ankara and Damascus to resolve this impasse. Difficult as it may appear, he believes it will find it.

Nevertheless, the increasing presence of jihadi groups in Idlib, most notably HTS, the former Jabhat Fatah al-Sham, has the potential to cause friction between Ankara and Moscow.

HTS fighters and other jihadi groups have reportedly been streaming into Idlib, after being defeated in the south, to regroup and continue their war against the regime.

Cahit Armagan Dilek, from the Ankara-based 21st Century Turkey Institute, pointed out that “Russia at various times has complained that Turkey has not done what it has to in Idlib, and wants this to be resolved now.”

This, Dilek argued in a July 28 article for Yenicag newspaper, is also what prevented Turkish forces from carrying their successful Olive Branch Operation against the YPG in Afrin to Tel Rifaat, another city with a YPG presence.

Al-Monitor’s Kirill Semenov pointed out recently that Tel Rifaat is under the protection of regime and Russian forces.

In his remarks to reporters last week, Erdogan listed Tel Rifaat as one of the regions where “developments are not moving in the desired direction.”

Turkey also lists HTS as a terrorist organization, but its position on the group remains ambivalent. Suspicions have been aired in the Turkish media regarding cooperation between Turkish forces and HTS elements in Idlib.

In January, Hurriyet reported on a strike against a Turkish convoy traveling to Idlib for deployment and cited sources who claimed it was being escorted by HTS fighters.

Ankara denies such claims, but the circumstances surrounding that strike, which resulted in Turkish casualties, were never clarified fully.

Whatever the truth may be, Ankara is still faced with the responsibility of having to control groups like HTS in order to maintain good ties with Moscow and facilitate a Russian-brokered settlement for Idlib.

Ercan Citlioglu, one of Turkey’s leading terrorism experts, pointed some months ago to Turkey’s dilemma as it started its deployment in the de-escalation zones in Idlib province.

“As Turkey carries out its mission under the Astana accord to prevent clashes between regime forces and opposition groups, this also results indirectly in the contradictory situation that it makes HTS feel at ease and secure,” Citlioglu wrote in May.

Muharrem Sarikaya, a columnist for the Haberturk news portal, reported last week that HTS “has started to be a problem for Turkey again in recent days.”

He indicated that the group had attacked Syrian and Russian bases with rockets fired from areas close to where Turkish forces are deployed. Sarikaya said retaliatory shells from Russian and Syrian positions had fallen near the Turkish forces.

Ergin pointed to the recent evacuation of pro-government forces and locals from the opposition-besieged Shiite towns of Fua and Kefraya, only 30 kilometers (19 miles) from the Turkish border. The deal was reportedly brokered by Turkey and Russia.

“What this means is that the Idlib region has been cleared of opposition fighters and most of its Alawite Shiite population and has become a homogenous geography for jihadis,” Ergin said, indicating that this will play into the regime’s hands.

In a further sign of Ankara’s increasing concerns in Syria, Erdogan also disclosed last week that Turkey will host a summit on Sept. 7 with France, Germany and Russia to discuss the Syrian conflict and other regional issues.

With uncertainty in Syria growing for Ankara, the only certainty appears to be that Idlib has the potential to cause a big headache for Turkey.

This is not what Ankara wants at a time when it has other developments in Syria to worry about, such as the political headway Syrian Kurds are reportedly making in their Russian-supported negotiations with the Assad regime.