Presidents Putin and Erdogan met on the sidelines of the BRICS summit in Johannesburg to discuss growing tensions over Idlib, where Russia and Turkey may be facing their moment of truth. 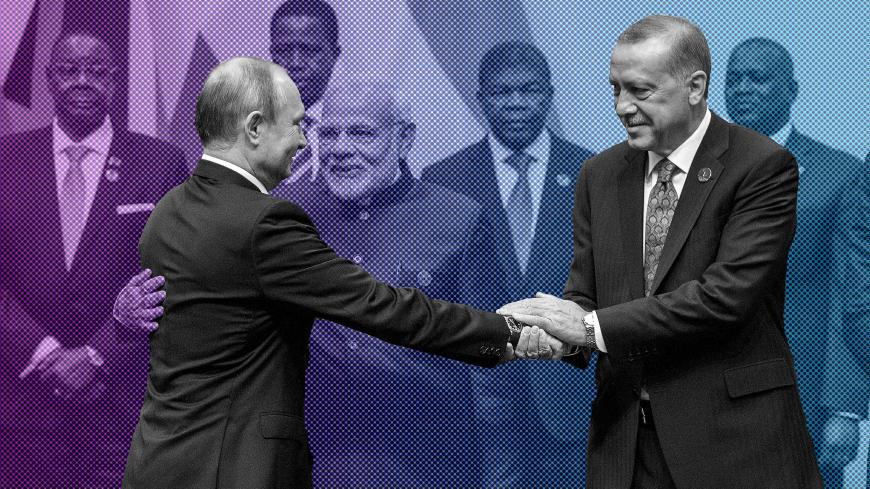 On July 26, Russian President Vladimir Putin and Turkish President Recep Tayyip Erdogan met on the sidelines of the BRICS Summit in Johannesburg, South Africa. As was anticipated ahead of the talks, their agenda was dominated by Syria and bilateral Russia-Turkish relations. The need for the meeting was motivated by serious concerns on part of the Turkish leadership over the situation around Idlib as well as the Kurdish issue in Syria. Ahead of the meeting, the two presidents had a few phone conversations where these issues were thoroughly discussed.

Turkey is preoccupied by the low-profile talks between the Kurdish Democratic Union Party (PYD) and Damascus that may result in the PYD maintaining its power in northern Syria. Turkey considers the PYD to be a terrorist organization. Facing the possibility of a US drawdown from Syria, the Kurds seem to be inclined to negotiate their future status with the Syrian regime.

A source in the Turkish Foreign Ministry who spoke with Al-Monitor on condition of anonymity said that during the meeting with Putin, Erdogan drew Putin’s attention to the need to inform him of such contacts with Kurdish representatives and to coordinate any moves on the Kurdish issues in Syria with Turkey as a guarantor state.

The PYD is also allegedly discussing with Damascus the possibility of opening its branch offices in other Syrian regions and integrating its fighters into the regime forces. To make matters for Ankara worse, the PYD appears to be prepared to join the Syrian state army in a possible regime offensive on Idlib. In return, the Kurds expect Damascus to return control over Afrin and Manbij — the two areas the Kurds conceded to Turkish forces. PYD representatives have maintained a presence in the area. The Tel Rifaat region, which still hosts some PYD units, is under protection by the regime and allied Russian forces and is seen in Turkey as a potential foothold for a joint Kurdish-Syrian army offensive against the groups that are under Turkey’s patronage.

The situation over Idlib is indeed worrisome for Turkey given it’s yet another de-escalation zone of which Turkey, along with Russia and Iran, is a co-guarantor and around which Turkey has established 12 observation points. Although the evacuation of Shiite enclaves in the towns of al-Fu'ah and Kafriya had first seemingly decreased the possibility for such an offensive, Bashar al-Assad’s forces have launched deployments on the opposite flank of the de-escalation zone in Idlib. The Putin-Erdogan meeting in Johannesburg was taking place against the backdrop of reports of Syrian government reinforcements in Latakia and Hama — the regions that neighbor the opposition-controlled so-called Greater Idlib. The start of the Assad offensive on Idlib may virtually annul agreements with Turkey on the de-escalation zone. Yet Damascus and its allies have their own reasons to strike as quickly as possible.

The Syrian regime enjoys the momentum of military successes. Damascus clearly understands that in order to make the triumph complete, there needs to be the final spurt on Idlib. The Baath Party leadership sees the latest victories in eastern Ghouta, eastern Qalamoun, Homs, most of Daraa and Quneitra as severely demoralizing for opposition forces in Idlib. Many in the opposition are already seeking opportunities to leave the country fearing the northwest of Syria will soon end up under Assad’s control. Hence, given the speed with which the opposition militants are dealt with in the south of Syria, Russia and Syria would want to take advantage of this momentum. With no further operative delay, they would begin the operation as soon as most combat-capable units — especially the Tiger forces and the 4th tank division — arrive at this front.

Syria and its allies apparently don’t think much of the Turkish observation points in the area, and Turkey is seemingly not ruling out the possibility of an offensive in Idlib and has been fortifying its observation points with cement walls.

There is a precedent of offensives being waged with little regard to Turkish military observation points. On July 9, Ansar al-Islam and Fursan al-Iman launched a raid in the Turkmen Mountain region in north Latakia killing at least 25 pro-government soldiers. The Turkish military post located in the area failed to prevent the attack.

Some opposition sources told Al-Monitor on condition of anonymity that the operation was in Assad’s interests because it had no military significance but created a precedent for future regime offensives with no regard for Turkey’s military presence.

“The regime can now begin an operation in the areas located in-between the Turkish observation points and under a pretext of response to rising activity from the HTS [Hayat Tahrir al-Sham] terrorists,” one source said.

Remarkably, the Russian military already announced that HTS as well as Jabhat Tahrir al-Suriya, Faylaq al-Sham and some other anti-government groups had established joint operations headquarters to plan an offensive against Syrian government forces in Latakia. Opposition groups have not released any such statement, which they would usually do in cases like this. This may be Moscow setting the ground for a preventive strike to disrupt the terrorists’ plan. Russia may also want to provide security for the Russian Khmeimim air base from increasingly frequent unidentified drone attacks.

That said, Moscow fully realizes that without diplomatic preparation, the military offensive in Idlib runs serious risks. With all its desire to end the Syrian conflict, Russia remains interested in continuing bilateral cooperation with Turkey that goes far beyond the Syrian settlement. Thus, it can be presumed that Putin was more flexible on Erdogan’s requests and is open to work toward decreasing tensions over Idlib. Erdogan adviser Yasin Aktay said that Turkey will abandon the Astana format should the offensive on Idlib be launched. Ankara would then resume its full-scale military support for the Syrian opposition in Idlib. This, in turn, could gravely complicate the initial goals of an Idlib offensive for Damascus and its allies.

So most likely in Johannesburg, Putin and Erdogan did not reach a settlement to the Idlib issue strictly within the trilateral Astana framework. The issue will be further discussed both at the Sochi meeting due in a few days as well as during the summit between Putin, Erdogan and Iranian President Hassan Rouhani that is scheduled to take place in Iran presumably at the end of August.

It’s clear that it will be extremely difficult for Moscow and Ankara to find a consensus on Idlib. Russia will most likely push for the “coercion to peace” scenario it applied in southern Syria, making moderate opposition groups reconcile with the regime.

This approach is unlikely to be accepted by Ankara, which, according to some reports, has already sent its own counterproposals to Moscow. These proposals involve holding a Turkey-sponsored conference that would bring together all opposition groups, the inclusion of militant factions into an Ankara-supervised Syrian National Army, the passage of all heavy arms under control of the Turkish military and the formation of a united civil service that would conduct and oversee daily activities of the settlements within the de-escalation zone. The proposals may also serve as a basis for a further Turkish-Russian “protectorate” over the M5 highway that crosses through opposition-dominated areas. The highway would need to be open for transportation of goods between Damascus and Aleppo. Some sources argue that Russian military police may also be deployed along the road.

While all of this is still under discussion, the key question following the Johannesburg meeting remains whether Moscow is prepared to agree to such half-measures. If yes, for how long? And at what length is Ankara prepared to ensure that Idlib remains under opposition control?