Despite the gains Turkey believes it's made through growing its relations with Russia, the two countries' priorities in Syria are anything but aligned. 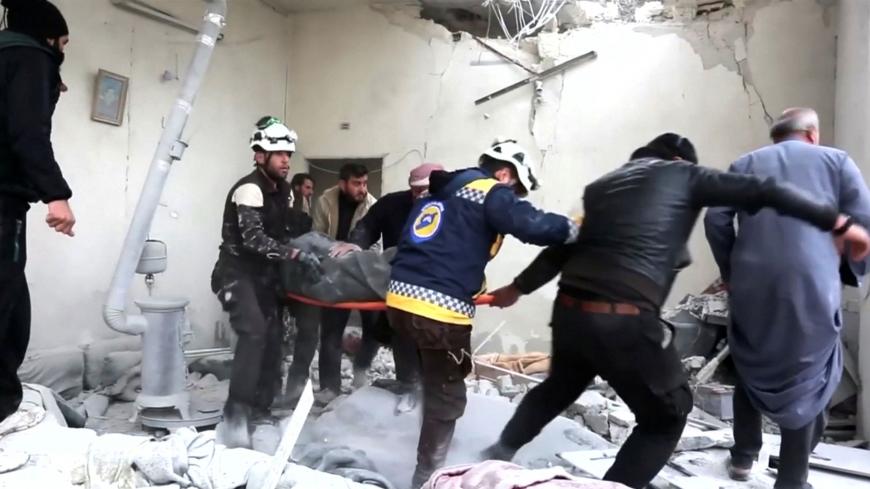 Civil defense forces carry an injured person through rubble after an airstrike by government forces on Khan Sheikhoun, Idlib, Syria, in a still from video shot Feb. 26, 2019. - ReutersTV/REUTERS

The escalating situation in Idlib is exposing the limits of Turkish-Russian cooperation in Syria. Having effectively surrendered to its need to maintain good ties with Moscow, Ankara is unable to openly criticize Russia over its participation in military operations by the Syrian regime in Idlib province.

In a state of selective denial, Ankara refuses to see the Russian involvement in these operations and is exhorting Moscow to prevent the regime from launching these attacks.

Following a May 10 meeting with top Turkish generals in Hatay province, near the Syrian border, Defense Minister Hulusi Akar called on Russia to take “effective measures” to prevent regime operations in Idlib. Akar argued that the regime was trying to gain control of territories in the south of Idlib province in violation of agreements reached between Turkey, Russia and Iran under the Astana process.

President Recep Tayyip Erdogan called Russian President Vladimir Putin on May 13 after the situation in Idlib showed signs of increasing tension, with reports that regime and Russian jets were targeting hospitals and schools and causing mass civilian displacement.

Erdogan’s communications director Fahrettin Altun tweeted that Erdogan had warned Putin that “the regime was aiming to sabotage Turkish-Russian cooperation in Idlib and to undermine the Astana spirit.” He was referring to the September 2017 Astana agreement between Turkey, Russia, and Iran that established a de-escalation zone in Idlib between the Turkish-supported Free Syrian Army and the Syrian regime's forces. It allowed Turkey to maintain a military presence in the region tasked with monitoring cease-fire violations.

In September 2018 at the Russian resort of Sochi, Erdogan and Putin arrived at a new accord on preventing an assault on Idlib by the Syrian army. Turkey was concerned that such an assault, which appeared imminent at the time, would create a new humanitarian crisis that would leave Ankara with a fresh deluge of Syrian refugees.

Under the Sochi agreement, Turkey was also tasked with neutralizing jihadist groups in Idlib, starting with Hayat Tahrir al Sham (HTS), which were excluded from the cease-fire agreement.

Altun explained that Erdogan had also underlined to Putin that major strides had been made under the Sochi agreement, which he said regime attacks on Idlib would undermine.

Moscow, however, continues to complain that Turkey has failed to fulfill its obligations. Following an April meeting of the Astana group in Nur-Sultan, the new name of Kazakhstan's capital, Russia’s Syrian envoy Alexander Lavrentiev openly expressed Moscow’s dissatisfaction in this regard.

“Our Turkish friends … have failed to eliminate the remaining terrorists [in Idlib]. The fact that [HTS] has managed to gain control of a large part of territory there has naturally resulted in many questions and is a great disappointment for us,” Lavrentiev told reporters.

Ankara has generally refrained from responding to such Russian criticism, preferring instead to blame the Syrian regime for the situation in Idlib.

Moscow also argues that HTS and its affiliates in Idlib have been targeting Russia’s Hmeimim airbase near Syria’s coastal city of Latakia, which it maintains is an added reason for Russian and regime operations in Idlib.

The readouts from Ankara and Moscow regarding Erdogan and Putin's May 13 phone conversation were not in tune.

Not referring to any of the topics Altun mentioned, the Kremlin said in its own account of the talks that the two presidents “had focused on the increasing cease-fire violations of radical armed groups in the de-escalation zones in Idlib.”

HTS and other jihadist groups were excluded from the cease-fire deal arrived at in Sochi, and remained legitimate targets for Russian forces and the Syrian army. The Free Syrian Army and other groups backed by Turkey, however, were included in the accord. By pointing to the “cease-fire violations of radical armed groups” in Idlib, Moscow is saying in effect that Turkey is supporting radical groups and not reining them in.

Syrian President Bashar al-Assad has vowed to recapture every inch of Syrian territory and has Russian — and Iranian — backing for this goal. Moscow has also called on Ankara on multiple occasions to turn over territories it captured previously in northern Syria from the Islamic State and the Kurdish People's Protection Units (YPG) to the regime.

Veteran foreign policy analyst Sedat Ergin wrote in Hurriyet that the intensive diplomatic telephone traffic between Ankara and Moscow appears to be doing little to change the situation on the ground in Idlib.

The announcement by the Syrian military last week that it has declared a unilateral 72-hour cease-fire in Idlib appeared to suggest that Turkey’s calls on Russia may be working. Nevertheless, the announcement was taken with a pinch of salt by analysts. Reports from Idlib indicating that regime attacks are continuing appear to justify their doubts.

Ergin highlighted the contradiction in Ankara’s reliance on Moscow to rein in the regime in Idlib, writing, “All the news from the field shows that Russia is actively participating in these operations and that the Russian air force’s bombardments are playing a key role.” He added that although Turkey is not in an alliance with HTS, the view that jihadist groups close to Turkey are also clashing with the Russian-supported Syrian army is gaining ground.

“We can say that we have entered a stage of controlled clashes between Turkish-supported Syrian opposition groups and the Russian-supported Assad regime,” Ergin wrote, suggesting a proxy war between Russia and Turkey is in the making.

In the background, Erdogan and members of his government continue to insist that Turkey will not revoke its decision to buy Russian S-400 missile defense systems despite US threats of sanctions and other punitive measures.

Ankara is also expressing hope that the S-400s will be delivered earlier than planned this summer. Meanwhile, Erdogan has started to float the notion that Turkey will also participate in the production of the even more advanced S-500s, although Moscow has not fully corroborated this news.

Given its position over the S-400s, which is clearly intended to send a strong message to the United States — with whom Turkey also has deep differences in Syria — Ankara is unlikely to take a position on any topic that will anger Moscow. However, this reluctance weakens Turkey’s hand in Syria, where it hoped that closer cooperation with Russia would enable it to upset American plans east of the Euphrates River in territory held by the US-supported YPG.

Ankara considers the YPG a terrorist group, and its main focus in northern Syria has been to eliminate it rather than taking on jihadist groups.

Ankara’s expectations, however, have not panned out. Its failure to get the YPG evacuated from Tal Rifaat, where the group has a degree of protection from Russia, also exposes its weak hand against Moscow.

Turkey is also relying on its ties with Russia to counterbalance its deteriorated ties with the West, where its commitment to its NATO membership is also being questioned.

Security analyst Nihat Ali Ozcan believes that Ankara’s burgeoning ties with Moscow cover a wide area ranging from military and economic cooperation to energy cooperation, and argues that this is preventing it from openly criticizing Russia for its actions in Syria.

“Turkey is also in an embarrassing position with regard to Russia because it has failed to realize the commitments it undertook at Sochi,” Ozcan told Al-Monitor. Referring to Turkey’s silence over Russian attacks in Idlib that it blames on the Assad regime, he invoked an old Turkish saying: “He who can’t beat his donkey will end up beating its saddle.”

The bottom line is that Turkey's ties with Russia have effectively given Moscow the upper hand against Ankara, which the Russian side is clearly intent on using to its advantage.