Analysts say any Turkish-Russian “partnership” in Libya could end up working more to Moscow’s advantage than Ankara’s, as was the case in Syria. 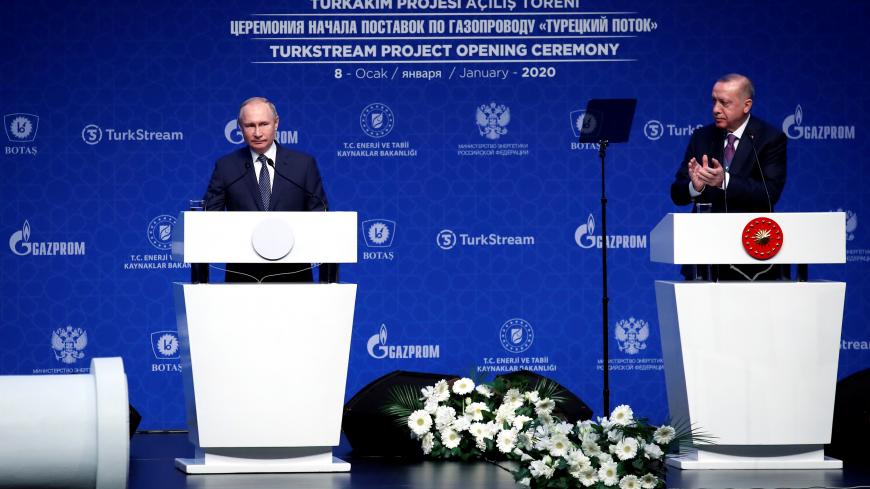 Turkey’s burgeoning economic ties with Russia were on parade again during President Vladimir Putin's visit to Istanbul on Jan. 8 to launch the TurkStream natural gas pipeline connecting the two countries.

This was Putin’s first meeting of the year with President Recep Tayyip Erdogan. The two met no less than six times in 2019, underscoring the close relationship they have established.

Notwithstanding the economic dimension, which both sides clearly value, Putin’s visit was significant because of the latest developments in Syria and Libya.

Erdogan’s talks with Putin were also held under the dark shadow cast by the assassination of Iranian Gen. Qasem Soleimani by the United States.

Announcing the results of the talks in Istanbul, Turkish Foreign Minister Mevlut Cavusoglu and his Russia counterpart Sergey Lavrov said the leaders had agreed to call on the warring sides in Libya to declare a cease-fire at midnight Jan 12.

They added that it was agreed that the sides would also work for a political settlement to the dispute in Libya.

The foreign ministers added that the leaders had also vowed to work for a cease-fire in Idlib, where Syrian regime forces, with backing from the Russian military, have been advancing against Turkish-backed opposition groups.

These points agreed on by the sides may not be enough to alter the situation on the ground in Syria or Libya, where dynamics that may be hard to roll back are in motion.

Although the friendship between Erdogan and Putin looks stronger than ever, as demonstrated by the niceties exchanged in Istanbul, political relations between the two countries are not as smooth as this camaraderie suggests.

Significant cracks have emerged in Syria — where Ankara and Moscow support opposing sides. Analysts point out that the same could happen in Libya, following Turkey’s decision to send forces to that country to bolster the UN-recognized Government of National Accord against attacks by the Libyan National Army headed by Khalifa Hifter.

Moscow did not welcome Turkey’s move in Libya and used diplomatic language to criticize it. "We believe that foreign interference will hardly help settle the situation,” Kremlin Spokesman Dimitry Peskov told reporters Dec. 26.

Officially speaking, Moscow is not supporting the Government of National Accord or the Libyan National Army. Nevertheless, the Russian mercenary outfit known as the Wagner Group has been actively supporting Hifter.

This group headed by a former Russian special forces commander with links to the Kremlin is ostensibly independent. Multiple reports indicate, however, that it receives logistical support from the Russian military.

The meetings between Erdogan and Putin in 2019 were aimed, among other things, at managing their differences over Syria. In January 2017 Turkey and Russia — together with Iran — initiated the Astana process with a view to starting an alternative track for peace in Syria.

This process also helped Ankara and Moscow give the appearance of working together to resolve the crisis in Syria, even if they are at odds on numerous issues in the country.

Erdogan and Putin have also held multiple bilateral meetings to address the situation in Syria. A notable case was their talks in the Russian resort city of Sochi in September 2018, where they arranged a cease-fire in Idlib between Russian-supported regime forces and Turkish-supported Syrian opposition groups.

That cease-fire never held as the latest developments in Idlib show. These developments also demonstrate how these accords between Turkey and Russia have largely worked to Moscow’s benefit.

“Turkey’s Peace Spring operation may have upended Syria’s geopolitical environment, but it also enabled Russia to settle in the region in a forceful manner,” Ergin wrote in Hurriyet.

Ankara had hoped that US President Donald Trump’s promised withdrawal from Syria and the subsequent defeat of the YPG by the Turkish military would give Turkey control over a 450-kilometer long and 30-kilometer deep (280 by 19 mile) swath of Syrian territory along Turkey’s border.

It intended to not only clear this territory from all vestiges of the YPG but also to settle hundreds of thousands of Syrian refugees in this “safe zone.”

What happened instead was that Russia settled into areas formerly held by US forces, locking Turkey into a stretch of land only 110 kilometers (68 miles) long. Ankara is also annoyed because Russia is allowing some YPG elements to remain in these regions.

“An asymmetrical situation in which the advantage has turned toward Russia is emerging [in Syria] out of this relationship [between Ankara and Moscow],” Ergin said.

During a television interview Jan 5, Erdogan reflected on that not all is well in the Turkish-Russian relationship.

He said he would discuss the “the regime's massacres in Idlib” with Putin when they met in Istanbul. Given that the Russian military is involved in these “massacres,” Erdogan’s remarks can be taken as an indirect criticism of Moscow, too.

Erdogan’s also lambasted the Wagner Group's involvement in Libya, adding that he would “discuss this matter in depth with Putin.”

Ankara and Moscow are clearly working on a diplomatic mechanism for Libya, similar to the Astana process, which could help them establish a modus vivendi in this crisis without endangering their ties.

Galip Dalay, a senior associate fellow at the Al Jazeera Center for Studies, has underlined the similarities between Turkey’s experience with Russia in Syria and the emerging situation in Libya. “Although Turkey and Russia are effectively supporting opposing sides, they appear set on a deeper engagement over Libya,” Dalay wrote in the moderate Islamist daily Karar.

Moscow may have turned a reluctant blind eye to Turkey’s gaining a limited military foothold in northern Syria, but its strong backing of the Assad regime has undermined all of Turkey’s main expectations in that country.

Ankara was convinced in 2011 that the Assad regime’s demise was only a matter of time. It believed this would be followed by a democratically elected party, similar to Erdogan’s Islamist Justice and Development Party, which would reach out to Turkey for help on multiple levels. Russia put an end to that dream.

Moscow is supporting Erdogan’s regional archenemy Bashar al Assad more than ever today. This was also evident after Putin arrived in Istanbul this week directly from an unexpected visit to Damascus.

Prior to his visit, Turkish officials were boasting that Putin’s first travel abroad in 2020 would be to Turkey. Putin’s call on Assad before meeting with Erdogan caught these officials unawares.

Put briefly, there is no guarantee that Russia will deliver what Turkey wants in Libya any more that it did in Syria. Ankara’s dilemma, however, is that it could end up as dependent on Russia in Libya as it is in Syria.

Meanwhile, Erdogan clarified in his Jan. 5 TV interview that the limited number of Turkish military personnel to be sent to Libya would go to train and advise Government of National Accord forces only. He was clearly eyeing the fact that the notion of sending Turkish combat troops to Libya has been met with opposition in Turkey.

Turkish Foreign Minister Mevlut Cavusoglu explained Jan. 6 that Turkey’s aim in Libya was “to establish a cease-fire as soon as possible and to contribute to the revival of the political process.”

Statements by the two foreign ministers following the Erdogan-Putin talks are in line with this. If Ankara can bring this about, then its military move in Libya will be seen as a masterful diplomatic step that expedited peace talks in that country. That, however, remains an open question.

Another problem for Turkey is that Russia is not the only stakeholder in Libya. Ankara has to also contend with the United Arab Emirates, Egypt, Saudi Arabia, and European powers such as France in that country.

Turkey signed a separate accord with the Government of National Accord in November for an exclusive economic zone between the Mediterranean shores of the two countries.

This was designed to rattle Greece, Cyprus, Egypt and Israel, who are engaged in joint energy exploration projects in parts of the eastern Mediterranean where Ankara says it also has rights.

Given that the UAE and Egypt are actively supporting Hifter — and are openly hostile toward Turkey — this may pose more obstacles for Ankara’s Libya plans.

Turkey and Russia will undoubtedly want to build on the results of the talks between Erdogan and Putin in Istanbul in the coming days and weeks.

Whether Moscow will deliver what Ankara wants in Libya any more than it did in Syria, however, remains uncertain.