What does Libya’s ‘Syrianization’ scenario mean for key actors?

Turkey may have gotten kudos for tipping the balance in Libya, but Russian countermoves raise the prospect of Turkish collaboration with Russia in the North African country, which is not to the liking of countries that have been giving plaudits to Ankara. 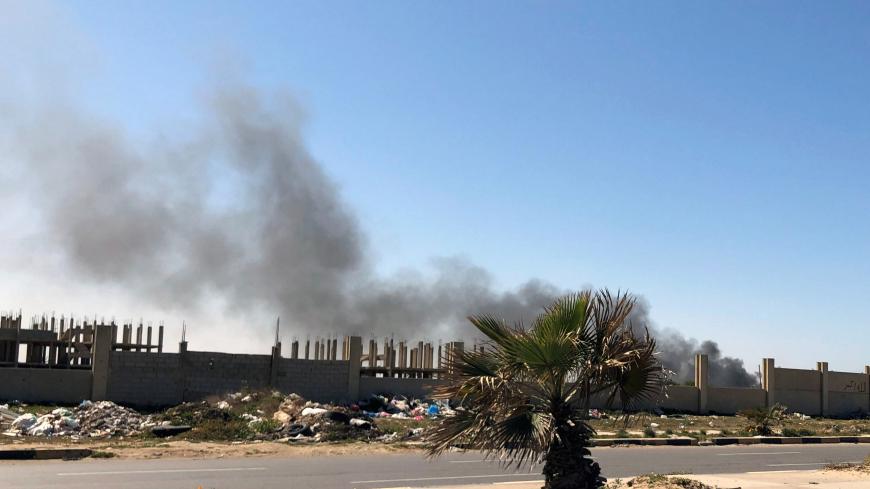 Smoke rises from Mitiga Airport after it was attacked in Tripoli, Libya, Feb. 28, 2020. - REUTERS/Ahmed Elumami

Will the Libyan conflict lead to another faceoff between Turkey and Russia, similar to the one in Syria? It is a question that many in Turkey have been asking since the emergency security meeting that President Recep Tayyip Erdogan convened last week over the deployment of Russian warplanes to Libya from Syria. The arrival of the Russian jets complicated Turkey’s calculations soon after its allies seized a key air base near Tripoli, tipping the scales in the war thanks to Turkish military and intelligence support.

In fact, Ankara has long realized that Russia is the essential power it would have to deal with in Libya, no matter that it has been shaking its finger at Egypt and the United Arab Emirates as the main backers of renegade commander Khalifa Hifter and his Libyan National Army. This was already evident in January, when Moscow became the first go-to for Ankara after it signed two crucial deals with the Tripoli-based Government of National Accord and obtained parliamentary approval to deploy soldiers in Libya. Yet, a tentative Turkish-Russian deal on a cease-fire fell through Jan. 14 as Hifter refused to sign the agreement in a snub to Moscow, which has backed the Libyan National Army via the private military company Wagner, while maintaining diplomatic contacts with the Government of National Accord.

The arrival of Russian jets in Libya, however, altered the situation anew.

The Government of National Accord’s interior minister said May 21 that at least six MiG-29s and two Su-24s had flown from the Khmeimim base in Syria to Hifter’s bases in eastern Libya. On the same day, Hifter’s air force commander threatened to unleash “the largest aerial campaign in Libyan history,” saying that all Turkish positions would be “legitimate targets.”

According to the BBC’s Turkish service, the deployment of Turkish warplanes to al-Watiya was among the options discussed in Ankara to counterbalance supremacy in the air.

The pro-government press, too, focused on the new form of the Russian challenge in Libya. “Ankara’s general thinking is that Russia … would not [risk] a crisis with NATO via Turkey. The planes sent by Russia will be reportedly operated by Egyptian pilots,” Haberturk wrote. “Ankara has no intention of withdrawing from the region, whatever the cost. So, against a possible attack, it is trying to build a capacity to respond from al-Watiya, where a military coordination center will be set up soon,” it added. Another daily, Yeni Safak, said F-16 jets could take off from Turkey’s Aegean or Mediterranean coast to respond to any attack on Turkish positions in Libya.

While tipping the balance against Hifter in the past six months, Turkey has received an additional boost from increasingly favorable stances by the United States and NATO. In a show of support for Turkey’s allies, US Secretary of State Mike Pompeo and Ambassador Richard Norland both spoke with Government of National Accord head Fayez al-Sarraj last week. In a written statement, the US Embassy in Tripoli slammed “forces seeking to impose a new political order [in Libya] by military means or terrorism,” adding that “the United States is proud to partner with the legitimate, UN-recognized government of Libya,” the Government of National Accord.

The US Africa Command, for its part, warned of security risks over the transfer of Russian jets to Libya. In the May 26 statement, AFRICOM commander Gen. Stephen Townsend said Russian mercenary pilots would fly the jets, while Gen. Jeff Harrigan, commander of US air forces in Europe and Africa, said the introduction of anti-access/area denial systems would be Russia’s “next logical step” in Libya, which would “create very real security concerns on Europe's southern flank.”

Washington’s messages and warnings may have strengthened Ankara’s posture in Libya, but the Russian factor dictates a reassessment of the situation. Despite reports of Wagner mercenaries pulling out from the front lines, Russia’s “jet show” and diplomatic moves are creating a new reality that will inevitably force Ankara to seek cooperation with Moscow. This is likely to be a replication of the Turkish-Russian partnership model in Syria, in which collaboration and confrontation intertwine.

The alternative of such grudging collaboration is braving a faceoff with Russia for Turkey and the prospect of another showdown with NATO for Russia. Certainly neither Turkey nor Russia are willing to lock horns directly, but this means little when it comes to proxy wars in Libya.

As things stand at present, military deterrence is likely to dictate a fresh negotiation process, steered by Turkey and Russia.

A Turkish posture blocking Russia from Tripoli may suit Turkey’s Western allies, just as in Idlib, but a Turkish-Russian partnership, forced by the conditions, would emerge as an objectionable option for the NATO camp. France has already raised the alarm, even though it aligns with Russia in backing Hifter. “The crisis is deepening. We are facing a ‘Syrianization’ of Libya,” French Foreign Minister Jean-Yves le Drian warned May 27.

As a former colonial power in North Africa, France is averse to a playmaking role for Turkey in Libya. And Turkey’s purchase of the Russian S-400 air defense systems has shown NATO allies how its partnership with Russia in Syria could expand into the defense realm.

For Egypt and EU members Greece and Cyprus, Turkey’s strengthening position in Libya — as much as to impose conditions on the negotiating table — would mean a setback in their rivalry with Turkey over energy resources in the eastern Mediterranean. A principal gain that Turkey would expect from a political settlement in Libya is the preservation of the maritime demarcation accord it signed with the Government of National Accord in November. The United States, too, is unhappy with the accord, as its ambassador to Greece reiterated this week.

For Cairo, there is also the nightmare scenario of the Muslim Brotherhood thriving next door in Libya thanks to support from Turkey, which had also backed the toppled Brotherhood government in Egypt. And the Donald Trump administration has been quite sympathetic to such Egyptian concerns.

In sum, Turkey may be getting applause for spoiling Russian calculations, but a playmaking role for Turkey in Libya would have many different repercussions for various actors.

And though the Libyan equation has become much more complex than it may seem, Turkey remains confident. France and anyone who is still supporting Hifter “is on the wrong side in the Libyan conflict,” Turkish presidential spokesman Ibrahim Kalin said May 25.

If a negotiating table is set to reunite Libya, the onus will be on Russia to coax the eastern forces — the Tobruk-based House of Representatives, led by Aguila Saleh, the interim government led by Abdullah al-Thani and Hifter’s forces. Russia is already making efforts on that front.

In late April, Saleh revealed he had worked with Russian advisers in drafting a political road map that called for a halt to hostilities, the establishment of a three-member presidential council representing Libya’s three main regions and a new government of national unity, while proposing only a military role for the Libyan National Army. The road map had angered Hifter, leading him to declare himself the sole ruler of Libya.

While the loss of al-Watiya further weakened Hifter’s hand, Lavrov had a phone call with Saleh on May 26, urging dialogue between the Libyan parties. His appeal seemed to bear fruit as Saleh met with several of Hifter’s commanders two days later.

All those developments on the eastern camp show that the Russians are able to influence changes on the ground. Similarly, the Government of National Accord, which owes its continued hold of Tripoli to Turkey’s intervention, is not in a position to reject a determinant Turkish say in Libya.