A spokesperson for the Russian Foreign Ministry blamed foreign interference for the prolonged conflict in Libya. 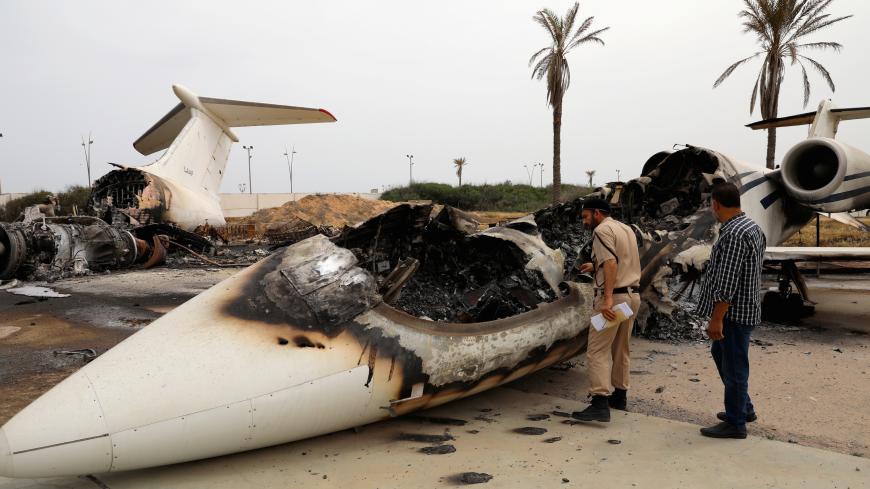 A police officer and another man inspect a passenger plane damaged by shelling at Tripoli's Mitiga airport in Tripoli, Libya May 10, 2020. - REUTERS/Ismail Zitouny

“The cease-fire declared in January failed completely. The fighting resumed at full scale,” said Zakharova, according to the state-controlled TASS news agency. “Thanks to massive outside aid, the balance of powers has changed.”

In Libya, a dizzying array of foreign actors have morphed the conflict into a full-blown proxy war.

Russia, along with Egypt and the United Arab Emirates, back Gen. Khalifa Hifter's self-styled Libyan National Army. For the past year, the renegade commander has been trying to take the capital Tripoli from the internationally recognized Government of National Accord (GNA), which enjoys support from Turkey, Qatar and Italy.

Hifter’s campaign has stalled in recent weeks as GNA forces backed by Turkish drones pushed the eastern army out of several key towns near the Tunisian border and recaptured the strategic al-Watiya airbase.

On Tuesday, the US Africa Command accused Russia of sending fighter jets to Libya to support state-sponsored private military contractors and “tip the scales in its favor.”

A recently leaked UN report accused Russia of deploying hundreds of mercenaries from the shadowy Wagner group to fight on Hifter’s behalf. The Russian government denies any involvement with the paramilitary group.

Earlier this week, the French foreign minister also expressed concern over the increasing foreign intervention in Libya. France, while officially recognizing the UN-backed government, has lent support to Hifter.

“The crisis is deepening. We are facing a ‘Syrianization’ of Libya,” French Foreign Minister Jean-Yves le Drian told a French Senate panel.