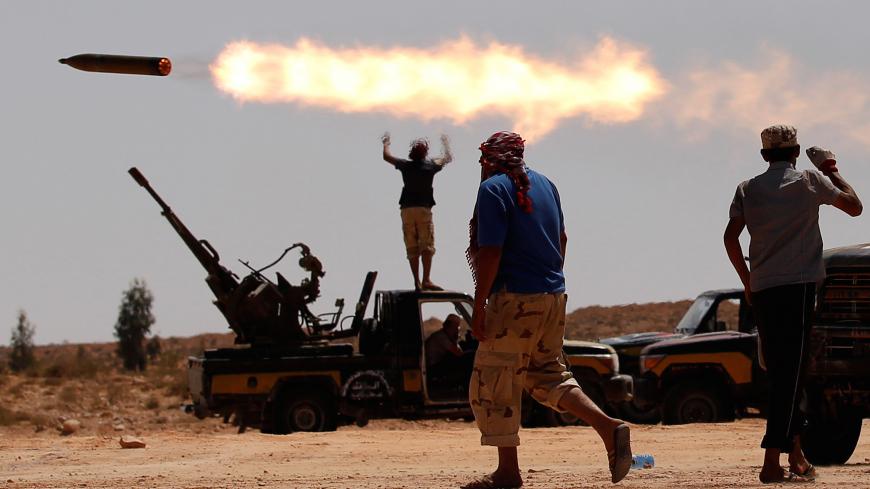 Fighters opposed to Libya's Moammar Gadhafi fire a multiple rocket launcher near Sirte, previously one of Gadhafi's last remaining strongholds in Libya, on Sept. 24, 2011. Gadhafi, who led Libya for decades, would die less than a month later. - REUTERS/Goran Tomasevic

“The crisis is deepening. We are facing a ‘Syrianization’ of Libya,” he told a French Senate panel, according to Reuters.

Le Drian’s comments follow a series of recent setbacks for warlord Khalifa Hifter and his self-styled Libyan National Army, which for the past year has waged an offensive on the capital, Tripoli. In capturing a key air base and several major towns this month, the United Nations-backed Government of National Accord has pushed back forces loyal to the renegade eastern commander.

Libya’s descent into chaos has drawn in several foreign powers, each pursuing their own agendas in the north African country. The Tripoli-based Government of National Accord enjoys support from Turkey, Qatar and Italy, while Hifter’s backers include the United Arab Emirates, Russia, Egypt, France and Jordan.

Foreign weapons from the warring parties’ international patrons have flooded Libya in blatant violation of a United Nations arms embargo, and the presence of foreign fighters has further complicated the situation on the ground.

Russia is accused of sending hundreds of mercenaries from the paramilitary Wagner group to fight on Hifter’s behalf, and Turkey has enlisted Syrian rebel fighters to shore up the Government of National Accord. The United Nations says Sudanese and Chadian rebels have also joined the fight.

On Tuesday, the US Africa Command said Russia has sent fighter jets to Libya to “tip the scales in its favor.” In a statement, the AFRICOM commander, Army Gen. Stephen Townsend, likened the move to Moscow’s intervention in Syria’s drawn-out civil war.

During a phone call with Libyan Prime Minister Fayez al-Sarraj last week, US Secretary of State Mike Pompeo reiterated “US opposition to the continued level of weapons and munitions being brought into the country.”