Ankara and Moscow might find common ground in Libya by bringing eastern and western forces to the negotiating table, excluding Khalifa Hifter. Such a prospect, however, would require pressuring Hifter’s backers. 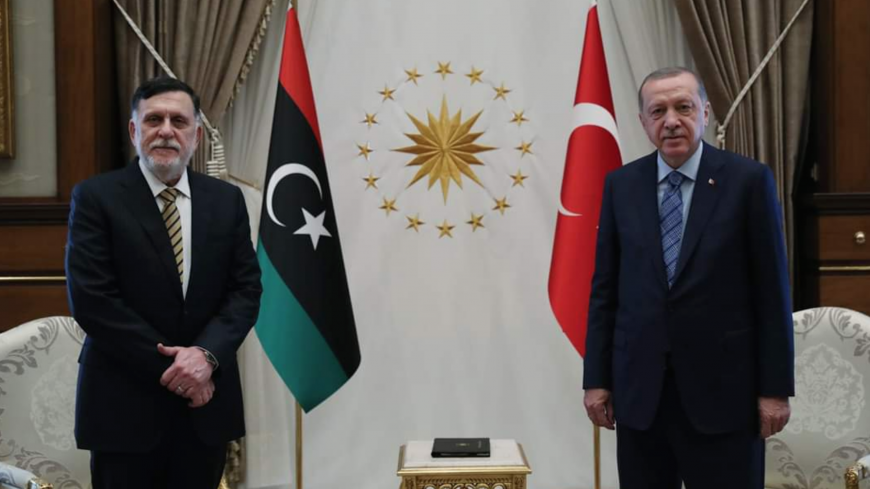 Fayez al-Sarraj, head of the Tripoli-based Government of National Accord, meets with President Recep Tayyip Erdogan in Ankara on June 4, 2020. - TWITTER

Diplomatic efforts to bring Libya’s warring parties to the negotiating table are gaining momentum as Khalifa Hifter’s Libyan National Army is quickly collapsing around Tripoli in the face of intensified Turkish intervention.

On June 4, Fayez al-Sarraj, head of the Tripoli-based Government of National Accord (GNA), met with President Recep Tayyip Erdogan in Ankara, a day after GNA Foreign Minister Mohammed Siala and Vice President of the Presidential Council Ahmed Maiteeq visited Moscow. Hifter and Aguila Saleh, head of the Tobruk-based House of Representatives, meanwhile, were in Cairo June 5-6. While the talks in Ankara sent a message of resolve to “liberate” all of Libya, those in Cairo resulted in a cease-fire appeal that suits Russia’s game plan.

The diplomatic flurry comes against the backdrop of rapid changes in Libya’s war map. Following their crucial loss of the al-Watiya air base south of Tripoli in May, Hifter’s forces withdrew from the Tripoli International Airport, Ain Zara, Wadi Al-Rabi'a, Qasr bin Ghashir and Tarhuna in the first week of June. Tarhuna, a town 90 kilometers (55 miles) south of Tripoli, was Hifter’s main stronghold in the west and served as a supply route in his siege of the capital. In sum, Hifter’s forces were pushed back to where they stood before mounting their offensive on Tripoli in April 2019.

The Hifter side was the first that Acting Special Representative and head of the United Nations Support Mission in Libya Stephanie Williams contacted as part of talks in the 5+5 format agreed upon in Berlin in January, raising optimism that negotiations could begin soon. Yet the diplomatic flurry is far from being concerted, complicating the pursuit of a common goal. On both sides, there are proponents of negotiations and continued military strife. On the eastern camp, Hifter, who had long evaded negotiations, has been forced to toe the line of Saleh, who favors a return to negotiations, following his setbacks on the battlefield. On the Tripoli camp, which went from defenders to attackers, calls to “fight to the end” have been louder.

At the outset of its game-changing intervention in November, Ankara’s priorities were to prevent the fall of Tripoli and thus protect the maritime demarcation accord it signed with the GNA that month. Yet two key messages emerged from the Sarraj-Erdogan meeting: a rejection of Hifter’s involvement in prospective negotiations, and an expression of resolve to capture all territories he controls.

Erdogan called Hifter a “putschist” who lacks “representative capacity to sit at the [negotiating] table.” Sarraj, for his part, said, “We will continue our struggle until we fully eliminate this enemy. … Despite certain pressures to sit at the negotiating table with this war criminal, we will never allow him an opportunity to negotiate.”

The two sides referred also to economic gains, radiating confidence they will win the war. Erdogan said cooperation on exploration and drilling would continue so as to make use of natural riches in waters off of Libya, while Sarraj said Turkish companies would be welcome in Libya’s post-war reconstruction.

The reversal of the tide was on display in Cairo as well with the eastern forces now calling for dialogue. Flanked by Hifter and Saleh, Egyptian President Abdel Fattah al-Sisi announced the Cairo Declaration, which called for a cease-fire starting June 8, the election of a presidential council, a return to the Geneva talks and the withdrawal of all foreign forces from Libya. For some observers, the move is an acknowledgment of defeat; for others, it is a maneuver to gain time to recuperate for a fresh offensive.

The Tripoli forces’ response to the cease-fire appeal was to launch an assault to seize Sirte, al-Jufra and the oil fields to the south.

Yet regardless of whether a cease-fire is observed, the warring parties face the following three options:

Turkish-Russian collaboration would be a cause of alarm for the United States, which has been supportive of Turkey’s intervention in Libya. So, given the hurdles that such a partnership might face, a settlement process with enhanced Turkish and Russian influence but still under UN auspices in Geneva appears to be a more realistic prospect.

Though the course of events is imposing collaboration on Turkey and Russia, they are playing hardball on the way to negotiations. Russia is keen to keep the eastern forces robust, although its hitherto support for Hifter has failed to bear fruit. It seems to be opening the way for Saleh who, in April, proposed a political roadmap, drafted with the help of Russian advisers, that calls for negotiations and the establishment of a new, three-member presidential council and a new national unity government. In other words, Russia wants the House of Representatives, stuck in Tobruk since 2014, to regain its influence. The Cairo Declaration is thus in line with Russian interests.

At the same time, Russia is stepping up efforts vis-a-vis the Tripoli camp, as their visit to Moscow shows, not letting Turkey run the show alone on the GNA side. As a Russian Foreign Ministry official emphasized, Moscow is taking “definite steps” for a political solution “in contact with all Libyan parties.”

Tellingly, Maiteeq — one of the Libyan figures closest to Turkey — lauded Russia as an important partner in stabilizing Libya after meeting with Foreign Minister Sergey Lavrov. “Russian diplomacy will work with us to reduce this escalation,” he said. The Tripoli side seems to acknowledge Russia’s importance in countering France at the UN Security Council, to which it owes its international legitimacy, and is willing to offer Russia privileges in the oil sector. France is reportedly planning to seek a Security Council resolution withdrawing the international legitimacy of the GNA, though such a prospect appears unlikely.

Meanwhile, Russia has continued to invest in the military field. In late May, a Russian ship that reached Benghazi after allegedly deviating from its declared route is believed to have taken weapons to mercenaries from the Wagner Group. Turkish cargo flights in support of the Tripoli forces have continued as well. A Turkish air force C-130 Hercules cargo plane, for instance, has flown 17 times to Misrata since mid-May, reports say.

Sarraj may have vowed to take control of all of Libya, but Russia is believed to have set a cease-fire line or a boundary between the warring parties in its mind. In agreement with Ankara, Moscow withdrew Wagner mercenaries from the south of Tripoli; it remains to be seen whether it will cede al-Jufra, their new place of deployment.

In Ankara, assessments appear to be increasingly based on anticipation that the balance in Libya might abruptly change, with the coalition around Hifter unraveling and the GNA extending its control over the whole country. Yet the assessments do not rule out the prospect of Egypt, the United Arab Emirates (UAE), Russia, France and Greece doing their best to prevent such a scenario, which would play into Ankara’s hands in the energy rivalry in the eastern Mediterranean. To avert Hifter’s ultimate defeat, the thinking goes, the opposing coalition will likely turn up pressure for a cease-fire and try to turn it into an opportunity to recuperate.

The assessments also acknowledge that no European power, including Italy — which is currently siding with Turkey — would acquiesce to a Libya coming fully under Turkish control and that even the United States would be reluctant to back such an outcome. In the West, misgivings are already on the rise that a repetition of the Syria scenario in Libya will open the door to Russia’s direct military involvement. France, in particular, is irked that Turkey and Russia have seized the initiative in Libya.

So, what is Turkey trying to achieve in Libya at the end of the day? A point of convergence seems to have emerged with Russia: to bring the Tripoli and Tobruk forces to the negotiating table in a scenario where Hifter is excluded and thus the UAE, Egypt and France are sidelined from the game. Saleh, on whom Russia concentrates, could be considered a reasonable interlocutor for Ankara as well. The viability of this scenario depends on the Hifter-Salih rift growing deeper. Cairo’s move, however, shows it will not allow the rift to grow. Hifter’s backers might still come up with fresh plans to counter Turkey. Western players could step up their involvement as well, reckoning their interests would be jeopardized if Russia and Turkey increase their influence in Libya, albeit while sparring with each other.

Turkey, for its part, appears determined to expand the war to protect its deal with Tripoli on maritime zones. Yet there is a tough caveat here: For the deal to be relevant in the energy row in the eastern Mediterranean, the eastern shores should remain part of Libya; that is, Libya should not be divided. Insisting on war, however, increases the risk of partition.