Is there more to the talks about Block 9? Success of UN Security Council cease-fire depends on definition of "terrorist." 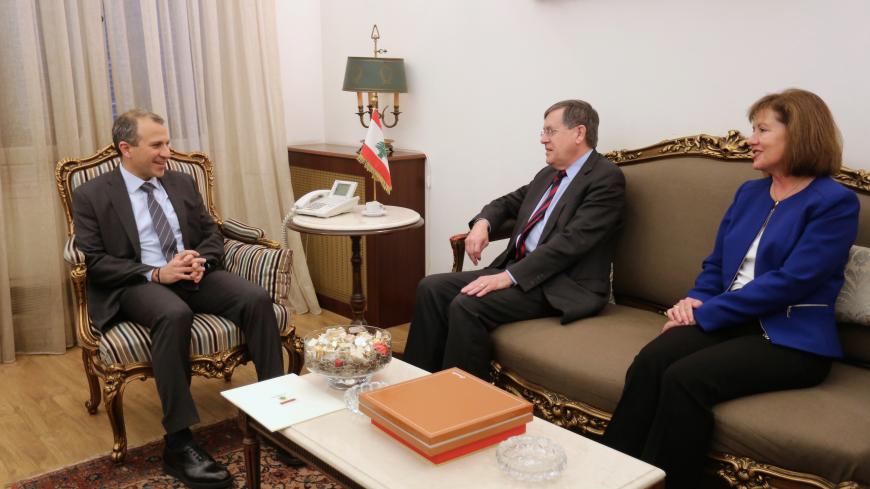 US Acting Assistant Secretary of State for Near Eastern Affairs David Satterfield has undertaken an unusual weekslong shuttle diplomacy mission between Israel and Lebanon following an agreement between Lebanon and a consortium of France’s Total, Italy’s Eni and Russia’s Novatek to begin offshore exploration of a disputed offshore gas field known as Block 9.

The decision by the Lebanese government to proceed with Block 9 exploration was labeled as “very, very challenging and provocative” by Israeli Defense Minister Avigdor Liberman. On Feb. 9, Israeli Energy Minister Yuval Steinitz said that diplomacy “is preferable to threats” but added later, addressing Beirut, “Don’t provoke us, and don’t explore in or even get close to the disputed line-of-contact.”

As Joseph Macaron reports, “When Lebanese Armed Forces commander Gen. Joseph Aoun asked what his troops should do if Israel violated Lebanese waters, Prime Minister Saad Hariri promptly responded, ‘You shoot at them.’”

Hariri’s unequivocal retort reflects what is known to any casual observer of Lebanese politics: the Israel file is held solely by Hezbollah. Whether Satterfield speaks to Hariri, President Michel Aoun, Foreign Minister Gebran Bassil or others in the Lebanese government, when the subject is Israel, the messages are conveyed to Hezbollah Secretary-General Hassan Nasrallah, who orchestrates what is conveyed back.

And given that the first exploration well for Block 9 is not scheduled to be drilled until next year, the US-brokered Israel-Lebanon talks may ultimately have even greater value as a precedent for a back channel to Hezbollah, and by extension Iran, about developments in Syria rather than in defusing a possible confrontation in 2019. Next year is a seeming eternity given the heightened risk of war among the major regional and international powers in Syria, as we explained here two weeks ago.

Washington may realize that it needs a diplomatic complement to its position in Syria beyond the deliberations at the UN Security Council. Secretary of State Rex Tillerson said Feb. 13, that, in addition to the 2,000 US troops that will remain in Syria, the United States and its coalition allies “control 30% of the Syrian territory, and control a large amount of population, and control a large amount of Syria’s oil fields.”

The question is how durable that leverage will be, and how reassuring it is to Israel, after Syrian anti-aircraft fire caused an Israeli F-16 to crash this month. The diplomatic agenda and military tempo in Syria are set by Russia, Iran and Turkey. Israel knows it can’t count solely on Russia to keep the peace on its northern border. Just six months ago, Iran settled the issue of the Iraqi Kurdish referendum on Tehran’s terms by working with and through the Iraqi government and the Popular Mobilization Units, and by dividing the Iraqi Kurdish groups.

The US position in Syria does not approach its position in Iraq. Tillerson and the US leadership may be wary of being exposed, and outplayed again, by Islamic Revolutionary Guard Corps Quds Force commander Qasem Soleimani.

Satterfield’s shuttle diplomacy cannot ultimately be separated from either Syria or the broader issues in the region. There can be no talk about Block 9 without discussing the Blue Line, the disputed border demarcation between Israel and Lebanon, which cannot be disentangled from the Syria question, which in turn is connected to the relationships between the United States, Israel and Iran.

The Satterfield mission and the prospects of a back channel to Hezbollah and Iran, via the Lebanese government, may provide an opening to de-escalating a potential conflict on Israel’s borders, while beginning the needed spadework for an eventual settlement of Israel-Lebanon border issues.

Will Damascus and Ankara keep the peace in Syria?

The UN Security Council voted unanimously Feb. 24 to enact a 30-day nationwide cease-fire to allow humanitarian assistance to besieged Syrian civilians. The resolution will not apply to military action against the Islamic State (IS), al-Qaeda or their affiliates, which are not parties to the resolution. Moscow’s insistence on this provision, which is consistent with Security Council Resolution 2254 of 2015, contributed to delaying the vote by several days.

The success of the cease-fire will depend on whether Syria and its backers, as well as Turkey, continue military operations against those groups Syria and its allies deem to be terrorists, and whether those armed and terrorist groups perceive a benefit to continuing their attacks.

For example, in Eastern Ghouta a difference may arise over Jaish al-Islam, the armed Salafist group backed by Saudi Arabia, which has accepted the terms of the cease-fire. Eastern Ghouta is one of the four “de-escalation zones” designated by Russia, Iran and Turkey in the Astana process. Jaish al-Islam, which is often now lumped with the "moderate" opposition and was a participant in the Astana talks, has at other times been considered a terrorist organization by Syria, Russia and Iran. While not linked to the IS or al-Qaeda, Jaish al-Islam rejects democracy, espouses hatred against Shiites and Alawites, advocates Islamic law for Syria and has been criticized by human rights organizations for caging prisoners and using them as human shields. Jaish al-Islam did not participate in the Syrian National Dialogue Congress held in Sochi last month and issued a statement condemning “whoever joins the conference.”

On Feb. 24, after the Security Council vote, Bashar al-Jaafari, Syria’s permanent representative to the UN, said that in the days before the resolution armed groups had fired “thousands of shells” on Damascus and that the Syrian government has the right to retaliate if attacks continue.

In Idlib, which is another of the Astana de-escalation zones, the dominant armed group is Hayat Tahrir al-Sham, which is linked to al-Qaeda and therefore considered a terrorist group and would not be covered by the resolution.

If the objective is truly a “nationwide” cease-fire, there is an open question as to whether Turkey will pause its Operation Olive Branch military campaign against the Syrian Kurdish People’s Protection Units (YPG), the armed wing of the Democratic Union Party (PYD). Ankara considers the PYD and YPG as directly linked to the Kurdistan Workers Party (PKK), which Turkey considers a terrorist organization. Washington also labels the PKK a terrorist group, but does not extend the designation to the YPG, which makes up the core of the Syrian Democratic Forces, the primary US partner in Syria combating IS.

After the Security Council vote, a Turkish Foreign Ministry statement said Turkey “will remain resolute in fighting against the terrorist organizations that threaten the territorial integrity and political unity of Syria” — a not-so-veiled reference to the YPG.

As this column went to press, Czech authorities had detained Salih Muslim, former co-chair of the PYD, in response to Turkey’s request for his arrest.

The Turkish attack on Afrin has introduced even more uncertainty into Russian President Vladimir Putin’s calculations in Syria. After speaking to his Turkish counterpart, Recep Tayyip Erdogan, on Feb. 19, three days after the visit of US Secretary of State Rex Tillerson to Ankara, a statement from Putin’s office said the focus of their conversation “was on further strengthening interaction in the Astana format. The presidents confirmed a readiness for close coordination of the efforts of Russia, Turkey and Iran aimed at ensuring efficient operation of the de-escalation zones and advancing the political process.”

Putin would prefer that Turkey accelerate its establishment of military observation outposts in northern Syria, per the Astana agreements. Metin Gurcan reports that “while the Turkish news media is breathlessly reporting every minor detail of the military's offensive in Syria — describing movements village by village, hilltop by hilltop — Turkey is quietly taking major steps to erect another military observation outpost east of Idlib. … According to the [Astana] agreement, Turkey is to establish 12 observation posts, creating a mini buffer zone to contain areas in Afrin held by the Kurdish People's Protection Units (YPG). The goals are to separate Aleppo from nearby Idlib province, which is controlled mainly by the Islamist group Hayat Tahrir al-Sham (HTS), and to halt any YPG aspirations to move westward in Idlib province and create a corridor to the Mediterranean Sea.”

“So far, Turkey has established six of the 12 outposts it has promised, but Moscow wants to speed up the work,” Gurcan adds. “Each outpost is designed to accommodate one mechanized infantry company. Almost two Turkish mechanized brigades (nearly 1,400 troops) reinforced with tanks, engineering and construction units are already there, and more are expected.”

Fehim Tastekin writes, “Now that Syria is mobilizing pro-government militias to defend Afrin, all calculations could be upended. Erdogan fully trusts Putin to keep the Syrian army away from Afrin. Is that what Erdogan spokesman Ibrahim Kalin had in mind when he denied reports of an accord between the YPG and the Syrian army?”

This column last week addressed Iranian efforts to broker a deal between the Syrian army and the Kurds to allow Turkey to de-escalate its military campaign. The Iranian initiative complements similar diplomatic interventions by Russia.

The military outposts envisioned in the de-escalation agreements are also linked to Erdogan’s interest in establishing a buffer zone to resettle Syrian refugees presently in Turkey. “Control of Idlib would enable at least some of the Syrian refugees in Turkey to settle in this buffer zone and impede a new migration wave to Turkey under pressure from the Assad regime, supported by Russia,” Gurcan adds.

“Today, there are two different jihadi fronts active west of the Euphrates,” Gurcan continues. “The first is made up of radicals neither Turkey nor Russia wants to have around; this group is determined to resist around Idlib. The other is the moderate front Turkey controls that operates against the Kurdish YPG. Russia wants the Turkish army to ramp up the pressure on radicals and compel them to join the ranks of the Free Syrian Army (FSA) on the Afrin front. Turkey has worked with the FSA and considers it a moderate opposition group. … So in other words, while Russian and regime forces are pounding Idlib, Moscow also hopes to guide Sunni armed resistance to a moderate stance through Turkey’s de-escalation operations and bring them into the pool of moderates in Afrin. Bluntly speaking, Russia believes the Assad regime will control Idlib long before Turkey achieves its goals. Turkey will not be able to bargain to turn over Afrin in return for Idlib.”