Turkish President Recep Tayyip Erdogan still has limited options in the wake of Syria's retaking of a key town in Idlib province. 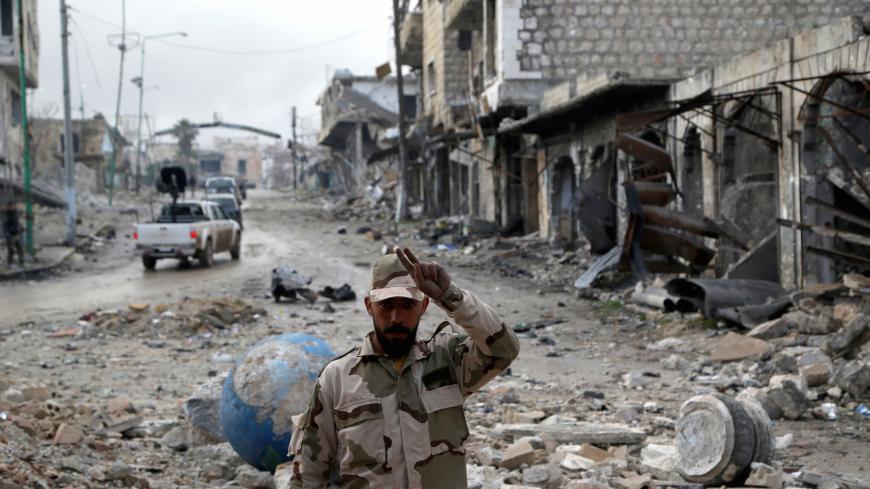 Syrian government forces, backed by Russia, retook Maaret al-Numan, a strategic town in Idlib province, and surrounding villages this week. Maaret al-Numan is a key node for the M5 highway linking Damascus with Aleppo, a long-sought Syrian military objective in the war.

For Russian President Vladimir Putin, the Syrian and Russian victory seems to come with a cost. His close ally and friend, Turkish President Recep Tayyip Erdogan, has publicly questioned Russian commitments to their deconfliction and cease-fire agreements in Syria; the latest cease-fire began Jan. 12.

Erdogan said this week that “unfortunately, Russia hasn't abided by either the Astana or the Sochi agreements,” referring to deconfliction and cease-fire agreements involving the so-called Astana group — Russia, Turkey and Iran. “We have waited until now, but from this point, we are going to take our own actions. This is not a threat but our expectation is that Russia will give the regime the necessary warning.” He declared the Astana process “moribund.”

Turkey backs some of the opposition groups in Idlib province, including those in and around Maaret al-Numan, and has Turkish troops stationed at outposts in the region. Ankara fears an influx of tens of thousands of refugees, or even much more, and has closed its border with Idlib.

For Putin, this is all part of his high-stakes, high-risk strategy for Syria. Erdogan has few cards to play, and must work with and through Putin, no matter what. The retaking of Maaret al-Numan, and the M5, may give Putin a breather, and a bit more leverage, to restart his efforts to reconcile for another round of diplomacy.

A "sour message" in Damascus

This latest chapter began with Putin’s surprise visit to Damascus on Jan. 7.

While that meeting symbolized the strength of the Russian-Syrian partnership, and that Syria had turned a corner in the war, Putin came with a big ask for Assad: Could there be a cease-fire or pause in Idlib just to allow Turkey to relocate some of the armed groups to Libya and to force others to break with Hayat Tahrir al-Sham (HTS), and while Putin worked his track II diplomacy with Erdogan?

Assad took this as a "sour message," according to Maxim Suchkov. The Syrian president sensed momentum in Idlib, especially with the world preoccupied with US actions in Iran and Iraq, following the US drone strike that killed Islamic Revolutionary Guard Corps Quds Force commander Qasem Soleimani on Jan. 3.

And not that Putin himself didn’t share Assad’s priority for retaking Idlib province, a holdout of opposition groups, including as many as 20,000-30,000 terrorists such as HTS, the progeny of al-Qaeda and Jabhat al-Nusra and affiliated radical jihadi groups. Putin has been frustrated at Turkey’s failure to separate the so-called moderate and nationalist forces from HTS and the jihadi armed gang, as called for in the Sochi agreements. The Idlib offensive has been fully backed by the Russian military, whose ties with the Syria go back decades.

Assad, it seemed, responded with a kind of “We’ll see,” knowing that he probably had the edge in setting the tempo in the Dawn of Idlib offensive, which began in December.

According to Fehim Tastekin, the spymaster summit led to a rough consensus on the Idlib operation.

… and another failed cease-fire

The cease-fire in Idlib broke down soon after the Jan. 13 meeting, with accusations on both sides, accelerating an already massive humanitarian crisis in Idlib.

In a briefing to the UN Security Council this week, Undersecretary-General for Humanitarian Affairs and Emergency Relief Coordinator Mark Lowcock said that fighting in “the Idlib area, especially around Maaret al-Numan, Saraqeb and western Aleppo … appears to be more intense than anything we have seen in the last year.” He noted that more than 100 civilians, mostly women and children, have been killed in the onslaught in Idlib province and western Aleppo since Jan. 1, in addition to 1,500 killed since April 2019. “Our assessment is that at least 20,000 people have moved [from Idlib province] in the last two days [since Jan. 27],” he added. “Some 115,000 have left in the past week. Nearly 390,000 have fled in the past two months [with] 850,000 in need of assistance in Syria each month, since 2019.”

For Turkey, which already hosts close to 3.7 million Syrian refugees, another exodus is out of the question.

Furthermore, Turkish troops are stationed in observer outposts in Idlib province, per the Memorandum on the Creation of De-escalation Areas in Syria signed by the Astana group in May 2017. These outposts are often in close proximity to Syrian attacks. The Turkish Defense Ministry warned Jan. 28, “Any attempt to endanger the security of our Observation and Control Points operating within the scope of the Astana and Sochi Accords will be responded to in the strongest manner without any hesitation based on the right of self-defence.”

Putin and Erdogan need to talk

Syria’s retaking of the M5 highway may provide a pause for Putin to take another run at diplomacy with Erdogan and Assad. Russia’s diplomatic and military surge in Syria has been a high-risk endeavor for Putin. The Russian president’s thin red lines in this round have probably been to assure that there would be no deliberate or "accidental" attacks by Russian-backed Syrian forces on Turkish outposts, and that Syrian forces would go into a "hold" posture after taking Maaret al-Numan to secure the M5 highway and limit refugee flows. Russia's chief of the armed forces' general staff, Gen. Valery Gerasimov, spoke by phone with his Turkish counterpart, Gen. Yashar Guler, on Jan. 30, probably to discuss that line.

Expect Putin and Erdogan to connect by phone, if not in person, very soon, to settle the situation, as Suchkov reports here. Erdogan’s bluster may be more smoke than fire, and for domestic consumption, as Tastekin writes. These is some lost face for Erdogan. His forces did not resist the Syrian advance, and he didn’t buck up the armed groups Turkey supports. Some of the groups under siege around Maaret al-Numan are ones he backs; the town is not an HTS haven. Erdogan knows he can’t afford to escalate the conflict, risk more casualties and refugees, and undermine his relationship with Putin, with so many other issues — Libya, arms purchases, economic ties, poor relations with the United States, his perception of the Syrian Kurdish threat — all in play. Erdogan can’t be happy with how this has played out, but Syria is a quagmire for him, not Putin.

Putin plays the diplomatic game in Syria as if he were gambling with other people’s money. One can probably envision a reason for a three-way negotiation among Russia, Syria and Turkey to hammer out some understanding on the Kurds. He still envisions a diplomatic breakthrough along the outlines of a cease-fire based on an updated version of a 1998 treaty between Syria and Turkey, in which Damascus ended its support and expelled the Kurdistan Workers Party (PKK). The PKK is designated as a terrorist organization by the United States and Turkey, and considered by Ankara (and others) as one and the same with the YPG. The YPG is also the backbone of the Syrian Democratic Forces, the US partner in the northeast, and which maintains control of oil fields there.

The Kurds are also in play. Amberin Zaman, in an exclusive interview with SDF Secretary-General Mazlum Kobane last week — the SDF has its own relationship with the Syrian government and military — outlined the SDF’s offer to cool down tensions with Turkey. As we noted here last week, “Kobane’s offer may be dead on arrival in Ankara — or not, depending on whether Putin picks up the thread. Our guess is that the Russian president incorporates Kobane’s goodwill gesture in his diplomatic arsenal.

On refugees, Putin’s appeal to Erdogan, including in a joint statement by the Astana group in December, was for refugees to return to “their original places of residence in Syria” — not just the Turkish-controlled safe zone in northeast Syria.

US Secretary of State Mike Pompeo warned in a statement this week, in response to the escalation in Idlib, that the United States is prepared to enact the “strongest diplomatic and economic actions against the Assad regime and any state or individual that aids its brutal agenda.”