The escalating offensives of Russian-backed regime forces in Idlib are changing the military picture in the whole of northwestern Syria, putting Russian-Turkish ties to a serious test. 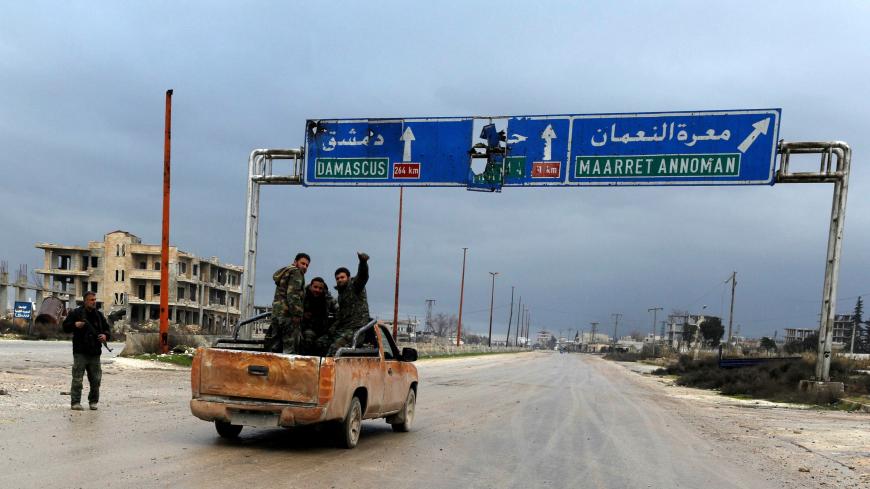 For nearly two years, Moscow has been facing an inevitable choice between Ankara and Damascus in Syria’s rebel-held province of Idlib, the consequences of which will bear directly on the Turkish-Russian alignment in recent years, which has been shaped by the “strongman brotherhood” between Turkish President Recep Tayyip Erdogan and Russian President Vladimir Putin. Developments in Idlib over the past several weeks signal that Moscow is opting for Damascus at the expense of losing Ankara in northwestern Syria.

Regime forces, backed by Russian air power, have stepped up their attacks on Idlib since early January, advancing both from the south of the province and western Aleppo. The escalating thrust is changing the military picture in the entire region to the west of the Euphrates, while putting Turkish-Russian ties to a serious test.

On the southern front, the advance of the regime forces, aided by Russian warplanes and special forces, resulted Jan. 28 in the fall of Maaret al-Numan, an opposition stronghold of strategic and symbolic importance, considered the hub of armed Sunni resistance since 2011.

Next in line in the south is the district of Saraqib. According to open sources, tank-supported Turkish mechanized units deployed in the town center Jan. 30, while setting up checkpoints on the M5 highway in the north and south of the district. Saraqib is emerging as the most critical spot in the arm wrestling between Ankara and Damascus in the coming days, as Ankara appears resolved to not concede Saraqib as easily as Maaret al-Numan.

Meanwhile, pro-Iranian militia opened a new front in the area between western Aleppo and northwestern Idlib in early January, further turning up the pressure on Idlib city.

The Russian-backed regime forces and the pro-Iranian militia will apparently try to unite the two fronts by April and take full control of the M4 highway to the south and the M5 highway to the east, which connects Aleppo to Damascus. For the Turkish-backed armed opposition, this would mean losing about 45% of the territory it currently controls in the Idlib region.

On the morning of Feb. 1, fighters from the Turkey-backed Syrian National Army (SNA) launched a counteroffensive from the south of al-Bab toward Aleppo. SNA factions in Afrin and the triangle between Jarablus, al-Rai and al-Bab, all under Turkish control, could mount further clashes with the regime forces to ease the pressure on Idlib. In other words, a continued regime offensive in Idlib could result in fighting spreading across northwestern Syria. Overnight on Feb. 1, however, Russian jets responded by bombing al-Bab, the first such attack since late 2017, signaling that Moscow will not allow the SNA to advance southward toward Aleppo.

Around 600,000 civilians have already amassed at the Turkish border, and since Feb. 1, tens of thousands of others have sought to flee the Turkish-controlled areas in Afrin and the Jarablus/al-Rai/al-Bab triangle. If the current pace of regime operations continues, the number of civilians piled up on the Turkish border could reach 1 million by the end of February.

Ankara had hoped that the Jan. 8 meeting between Erdogan and Putin in Istanbul would result in a cease-fire in Idlib, but in light of the developments since then, its hopes seem to be turning into a big disappointment.

A Turkish bureaucrat, who requested anonymity, told Al-Monitor, “We know that Putin personally promised Erdogan a cease-fire, but seemingly the Russian air force is either unaware that a cease-fire is in place or does not obey Putin’s calls.” Until last week, Ankara was indeed inclined to believe that some sort of divergence existed between Putin and his military aides on the issue of Idlib. Erdogan repeatedly indicated he had trust that his personal relationship with Putin would resolve any problem on the ground. The pro-government media also disseminated that narrative by emphasizing Erdogan’s adroitness, while downplaying the role of the Russian air force in the massive, indiscriminate air raids on civilians and nonmilitary sites such as hospitals, schools and markets in and around Idlib.

Since last week, however, the tone of both Erdogan and the pro-Erdogan media seems to be changing.

In remarks to reporters Jan. 29, Erdogan slammed Russia directly for the first time, saying, “Russia unfortunately has not been loyal to the Astana and Sochi agreements. … Either [Russia] stops the bombings in Idlib or our patience is running out and we will do what is necessary from now on.” Asked how the Astana process between Russia, Turkey and Iran would be affected, he said, “There is no Astana process anymore.” In further remarks a few days later, Erdogan warned that Turkey “will not refrain from doing what is necessary, including the use of military force [in Idlib],” asserting that any development in Syria was as important to Turkey as developments inside its own borders. “We will not and cannot be a spectator to the situation in Idlib or other regions of Syria,” he said.

Kremlin spokesman Dmitry Peskov rejected Erdogan’s accusations, insisting that Russia “fully complies with all obligations under the Sochi agreements regarding the Idlib zone.”

Nevertheless, Ankara and Moscow appear to be mutually losing interest in keeping up cease-fire and de-escalation efforts in Idlib.

So what military moves could Turkey make to at least slow down the regime offensive?

Ankara’s first option is to seek military collaboration with the United States to the west of the Euphrates River. US Air Force Gen. Tod Wolters, commander of the US European Command and NATO’s supreme allied commander-Europe, visited Ankara Jan. 30 for talks that focused on Syria. Sources in Ankara note that Wolters’ talks with Defense Minister Hulusi Akar and Chief of General Staff Yasar Guler covered the west of the Euphrates as much as the east of the Euphrates, where the US military presence is concentrated.

There is military logic, indeed, in Turkey moving closer to the United States should its rift with Russia in northwestern Syria deepen. Slowing down the Russian-backed regime forces in Idlib would serve US interests, too, because the longer Damascus remains busy in the northwest, the longer it will delay military moves into the northeast, especially the oil fields in Deir ez-Zor and Rmelan.

As power dynamics shift from the negotiating table to the battlefield, another card for Ankara would be to supply more sophisticated weapons to the armed groups under its patronage. What the rebels need most are anti-tank guided missiles such as the AT-3 Sagger, AT-4 Spigot, AT-5 Spandrel and TOW.

Better weather conditions will be a great advantage for the Russian-backed regime forces, after rain and fog often interrupted their ground offensives and air raids in December and January. Hence, they are expected to step up their offensives in the coming weeks. Anti-tank guided missiles would be a highly efficient weapon in impeding those offensives or making them costlier for the regime, even if not fully stopping them.

Wary of angering Russia, Turkey has not kept its promise to provide anti-tank guided missiles to the SNA so far, causing resentment in rebel ranks that Turkey is not doing enough to help the defense of towns. In light of the recent developments, Ankara might slacken its commitments to Moscow to make the weapons available to the SNA.

Meanwhile, four of Turkey’s 12 military observation posts in the Idlib region remain besieged by regime forces. Five other outposts could be surrounded within weeks, if the regime offensives continue unabated. This makes the security of the outposts and logistics convoys all the more crucial. Their safety has been ensured by Russian military police so far, but continued effective protection from Moscow is rather doubtful now. Aware of the growing risks, the Turkish Defense Ministry declared Jan. 28 that any harassment would generate a military response. The warning suggests that Turkey is determined to keep its outposts in Idlib until an ultimate solution is found.

The rebels might also get help to acquire man-portable short-range air defense systems — not immediately, but rather as a last resort to weaken Russian-Syrian air dominance when the armed opposition in the northwest becomes desperately squeezed. Such weapons would give a most crucial capability to the rebels, with likely force-multiplying effects on the ground that Russia has experienced in the past.