Syrian Kurds are pondering how to take advantage of Turkish-Russian tensions over Idlib, focusing on Turkish-controlled Afrin and not ruling out the prospect of fighting along with government forces if the conflict escalates. 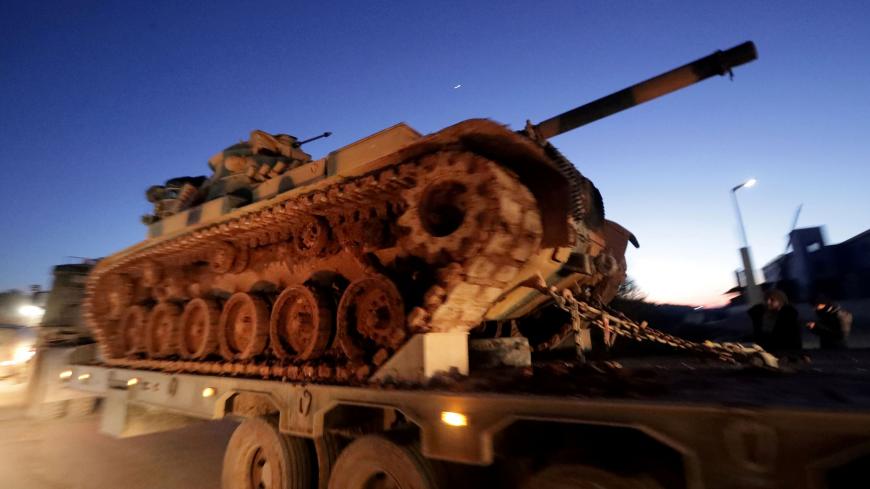 Amid heightened Turkish-Russian tensions in Idlib and a more assertive Iranian posture in the region, Syrian Kurds are said to be silently weighing their options in the event the conflict escalates and are not ruling out the prospect of fighting along with Syrian government forces.

Turkey had appeared rather calm last month when the Syrian army marched on Maaret al-Numan, an offensive that unfolded against the backdrop of a flurry of contacts between diplomats and military and intelligence officials in Moscow. Moreover, Turkish officials let Syrian rebel commanders know that the strategic M4 and M5 highways had to be somehow reopened as they briefed them about the talks with Russia in meetings in the Turkish border cities of Gaziantep and Reyhanli Jan. 15.

Yet when the Syrian army moved on to its next target, Seraqib, in late January, Turkey appeared to be going on a war footing to prevent the fall of the town, which lies on the junction of the M5 and M4 highways. It began sending reinforcements to Idlib, a move that came after Gen. Tod Wolters, the commander of the US European Command, visited Ankara Jan. 30 to discuss the situation in Syria, as shelling by Syrian government forces killed eight Turks, including soldiers and civilian contractors, Feb. 3 near Seraqib. While Ankara urged a return to the cease-fire line behind its 12 observation posts in the region, the Syrian forces took control of nearly 100 locations within a week, heedless of Turkey’s intervention threats. With Turkish forces cutting off the eastern approach, they drew an arch from the south to the west to quickly capture Seraqib. As a result, seven Turkish military bases, including three recently established checkpoints, were besieged as of Feb. 8.

Turkey has continued to send reinforcements into Idlib, with hundreds of vehicles crossing the border. Turkish intelligence officials have reportedly held another meeting with some 40 rebel commanders in Reyhanli, telling them negotiations with Russia have failed and they should “prepare for the worst.” A source who attended the meeting told Reuters the rebels saw Idlib city as “a red line.”

All those developments in the northwest are reverberating to the east of the Euphrates River, where the Syrian Kurds are silently preparing for possible scenarios. Amid the escalation in Idlib, the Turkey-backed Syrian National Army (SNA) has mounted attacks in the Tell Abyad and Ras al-Ain areas but failed to pose a serious challenge to the Kurds. The Kurds, meanwhile, are mulling how to take advantage of evolving equilibriums in the event of a broader Russian-Turkish rift.

Turkey’s beating of war drums over Idlib has led the Kurds to consider the option of collaborating with the Syrian army in eventual offensives to retake areas to the west of the Euphrates. The focal point of the Kurds is the Afrin region, which Turkey seized in March 2018 as part of efforts to stymie the Kurdish drive for self-rule in Syria on the grounds that it is led by affiliates of the Kurdistan Workers Party (PKK), the insurgent group in Turkey that Ankara considers to be a terrorist organization. According to Syrian Kurdish sources contacted by Al-Monitor, the Kurdish sentiment and assessments could be summarized as follows:

If the escalation on the ground results in major tensions with Turkey, Russia might end its strategy of letting Turkey safely conduct military operations, including the “blinding” of air defense systems to the activity of Turkish aircraft, preventing confrontation between the Turkish and Syrian armies, reining in pro-government militia and minimizing the risk of asymmetric responses, as seen in Turkey’s Olive Branch and Euphrates Shield operations. The termination of such brake mechanisms, which have functioned thanks to joint coordination centers, might lead to surprise developments anywhere the Turkish military is present.

Alternatively, if Turkey and Russia agree on a new cease-fire line after the reopening of the M4 and M5 highways, Moscow might return to its strategy of paying regard to Turkish concerns on the Kurdish issue. For the Kurds, this would mean going back to the waiting room. The rapid changes in Idlib, however, have weakened the possibility of Russia greenlighting a Turkish offensive on Kobani in return for an Idlib deal, a scenario the Kurds have taken seriously for some time.

Meanwhile, a new aspect is emerging in Iran’s involvement in Syria, which the Kurds are not very willing to discuss as of yet. Iran had kept a low profile until recently, as the United States used the Iranian presence to justify its stay in Syria and Israel did the same to strike targets on Syrian territory. But since the killing of Quds Force commander Qasem Soleimani in early January, Iran has vowed to oust US forces from Iraq and Syria as part of a broader “revenge” strategy, which appears to have brought it to the Idlib and western Aleppo fronts. Along with Hezbollah, pro-Iranian groups such as the Zainabiyoun Brigade, made up of Pakistani Shiites, and the Fatemiyoun Brigade, an Afghan Shiite militia, have taken part in the recent fighting in the region. Moreover, Ali Akbar Velayati, a top adviser to Supreme Leader Ayatollah Ali Khamenei, has vowed that “the Syrian government and its allies from the resistance front will go from Idlib to the eastern Euphrates to expel the Americans.”

The Iranian strategy closely concerns the Kurds. If the Kurds are to be drawn away from the United States and brought closer to Damascus, then meeting Kurdish demands on a “reasonable” level is not something Iran would object to. Despite its own Kurdish problem, Iran has been careful in its ties with the Syrian Kurds since the beginning of the Syrian crisis. While Russia sees rapprochement between Ankara and Damascus as a shortcut to closing ongoing fronts and moving on to the reconstruction stage, Iran is irked that Russia has opened too much room to Turkey. Ankara’s conditions on the Kurds, meanwhile, are blocking Moscow’s exit strategy. Tehran, for its part, favors Kurdish alignment with Damascus in a way that would bring further gains to the Syrian government.

Of note, the PKK leadership, based in Iraq’s Qandil Mountains, has come to see Damascus as the address of settlement, taking into account the Iranian factor as much as the Russian one.

Yet if the SDF keeps up its partnership with the United States, it could face the risk of the Idlib scenario being repeated to the east of the Euphrates at the expense of the Kurds; hence the significance of Velayati’s warning.

With all that said, the main factor defining the present sentiment among the Kurds is their sense of uncertainty. Thus, no one in the Kurdish movement is willing to declare a clear position yet, making do with general assessments.