Iran has been trying to dissuade Turkey from a fresh intervention in Syria while making military preparations on the ground to protect its interests amid a growing rift between the two neighbors. 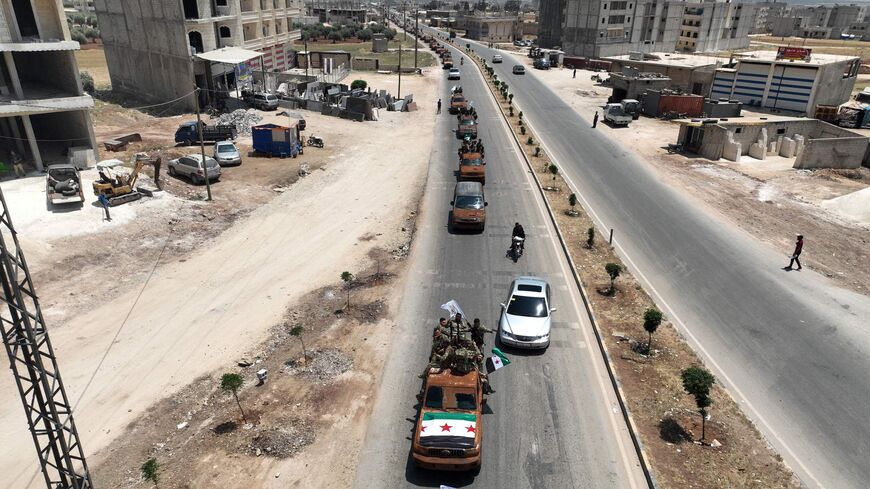 This aerial view shows Turkish-backed Syrian rebel fighters in the border town of Azaz in the rebel-held northern part of the Aleppo province heading toward the Kurdish-controlled town of Tel Rifaat on June 9, 2022. - BAKR ALKASEM/AFP via Getty Images

Driven apart by clashing regional interests, Turkey and Iran appear headed for a face-off in Syria, with Tehran explicitly opposing Ankara’s plan for a fresh military operation against Kurdish-held areas, wary of risks to its own posture in the region.

Turkey has failed to get a green light from the United States to press ahead with the plan, while Russia appears to be stalling. The Iranians, meanwhile, have sent militia reinforcements to two Shiite settlements northwest of Aleppo, not far from a key area in Ankara’s crosshairs, while trying to talk Turkey out from making the move — apparently with little success thus far. The Iranian foreign minister was expected to hold talks in Turkey on June 6, two days before a critical visit by Russia’s foreign minister, but the trip was cancelled due to what the Iranian press described as scheduling problems. An Iranian journalist who closely follows Turkish-Iranian ties told Al-Monitor that Tehran sent a military intelligence official to Ankara to convey its objections. Al-Monitor could not verify the claim independently. The journalist asked to remain anonymous.

The notion of rivalry has become an understatement in defining Turkish-Iranian ties. The rifts between the two neighbors have deepened amid an array of issues concerning Syria, Iraq, Lebanon and Yemen, coupled with frictions over the sharing of transboundary waters and a seemingly uncontrolled stream of Afghan refugees to Turkey from Iran. The two sides have stood with opposing blocs in the government-formation impasse in Baghdad and wrangled for influence in Mosul, Kirkuk and Sinjar. Tehran has wooed the Shiite section of the Turkmen minority to divide Ankara’s main ally in Iraq. It has denounced Turkey’s pursuit of militants of the outlawed Kurdistan Workers Party (PKK) on Iraqi territory, and Iranian-backed militias have attacked a Turkish base there amid Turkish accusations that Iran is covertly backing the PKK. Moreover, Ankara has moved closer to the Arab-Israeli axis emerging against Iran and reverted to pleasing the Saudis in Yemen as part of normalization efforts with Riyadh.

It was in this atmosphere that the Iranian Foreign Ministry slammed Turkey’s intervention plan, warning that it would only exacerbate tensions and humanitarian suffering in Syria.

It’s no secret that Turkey’s military presence in Syria as a result of three interventions since August 2016 is a bigger concern for Iran than that of Russia. Iranian media outlets have described Turkey’s presence as an “invasion” and referred to the Syrian National Army (SNA), Turkey’s rebel allies, as “Turkish-backed terrorists.” They have accused Turkey of pushing demographic changes to the detriment of the Kurds, expanding the space of “terrorists” under the guise of safe zones, seeking gains to use against Damascus in future talks or laying the ground for annexing Syrian territory. Vice versa, Turkey’s government-controlled media have used the “terrorist” label for Iranian-backed Shiite militias in Syria and Iraq.

Turkey’s seizure of Tel Rifaat, which President Recep Tayyip Erdogan has explicitly named as a target along with Manbij, would jeopardize the nearby Shiite settlements of Zahra and Nubl as well as Aleppo city, hence Tehran’s vocal objections and its reinforcement efforts in the area. Commenting on Turkey’s intervention plan, SNA spokesperson Youssef Hammoud told Baladi News he expects Iran “to resist both politically and militarily, as evidenced by the military support it has provided by deploying several columns in the region.” All Syrian government forces and allied militias in the region are assisted by advisers from Iran's Islamic Revolutionary Guard Corps (IRGC) and could intervene militarily, he added.

Separately, Hammoud told Reuters, “The Syrian regime and its Iranian militias have mobilized and [are] sending reinforcements to the YPG” — a reference to the Kurdish People’s Protection Units, which Ankara has vowed to oust from Tel Rifaat.

Turkey’s state-run Anadolu news agency, meanwhile, reported that Iranian-backed Shiite militia attempted to deploy Grad missiles to the area May 30, but were stopped by Russian forces. A Kurdish source confirmed to Al-Monitor that the Russians alerted the YPG of the Iranian move.

Iran had taken a similar hard line against Operation Olive Branch in 2018, which resulted in Turkey’s seizure of Afrin. Shiite militants were dispatched to help the Kurds in Afrin but their convoy was stopped by a Turkish air raid on the way. The Kurds have coordinated with Iranian-backed militias in the Aleppo region even though they see them as a primary threat in the case of a power vacuum in areas to the east of the Euphrates.

Could Iran go even further now at the risk of a showdown with Turkey? According to the Iranian journalist, Turkey is “well aware” that Iran will defend Zahra and Nubl, even though Iran has avoided directly confronting Turkey in Syria thus far, except for Iranian participation in a 2020 offensive in Idlib that resulted in Damascus recapturing the crucial M5 highway.

Though Ankara has not mentioned Zahra and Nubl as targets, they would fall within Turkey’s range should it take control of Tel Rifaat. The two settlements and Tel Rifaat are seen as a barrier shielding Aleppo. Tel Rifaat is situated only 27 kilometers (16.8 miles) north of Aleppo, while Nubl and Zahra are both less than 20 kilometers (12.4 miles) away from the city. Iran is wary of a scenario similar to a three-year siege by the jihadist group Hayat Tahrir al-Sham (HTS) on the Shiite towns of Fua and Kafriya in Idlib. The locals were evacuated in 2018 in return for the release of 1,500 government opponents from Syrian prisons.

Zahra and Nubl themselves remained under siege by rebel forces, including Jabhat al-Nusra, the predecessor of HTS, from 2013 to 2016. In February 2016, Turkey tried unsuccessfully to prevent the Syrian army and the YPG from seizing Tel Rifaat and its environs by mobilizing the Free Syrian Army and even transferring Islamist fighters from Idlib to the north of Aleppo via Turkish territory. The return of government forces to the area not only broke the siege of Zahra and Nubl, but cut off the route to the Turkish border, which was sustaining the rebel forces in Aleppo. Eventually, the government recaptured the entire city.

Today, Kurdish and government control in Tel Rifaat and its environs prevents rebels in Idlib from crossing to the Turkish-controlled Euphrates Shield pocket and accessing Aleppo. The importance of the area feeds suspicions that Ankara’s aims may go beyond weakening the Kurds.

According to various sources, local groups trained and equipped by Hezbollah, Iranian-sponsored Shiite groups such as Fatemiyoun, Hashemiyoon and Zainabiyoun and the Syrian government’s militia the National Defense Forces are all present in Zahra and Nubl. They are reportedly coordinated by the IRGC, which has a headquarters in the area.

Iran’s Mehr news agency notes that some Syrian rebels see Turkey’s intervention plan as a way to advance to Aleppo and warns that Tel Rifaat’s proximity to Zahra and Nubl could provoke “the axis of resistance” and “make things more difficult for Erdogan.”

Turkey offers three arguments for viewing Tel Rifaat as a target. First, the YPG uses the area to launch attacks on Turkish-controlled Afrin and the Euphrates Shield pocket. Ankara also claims that 250,000 people who fled Tel Rifaat in 2016 want to return, even though the local population was about 80,000 prior to 2016. Third, Tel Rifaat provides 60% of the potable water in the region.

Russia’s continuing contacts with Turkey may be an insurance policy to decrease the risk of confrontation between Turkish troops and Iranian-Syrian forces, but Tehran feels pushed aside as a guarantor of the trilateral Astana process on Syria. The hardening climate might undermine the whole process as the three sides prepare to hold an 18th round of talks later this month. Could Turkey abruptly jump into action and break all hell loose before the meeting? With no predictable leadership left in Ankara, the question is anyone’s guess.