The Syrian Kurds' partial collaboration with Syrian government forces in northwestern Aleppo has so far failed to expand amid whirlwind developments in Idlib. 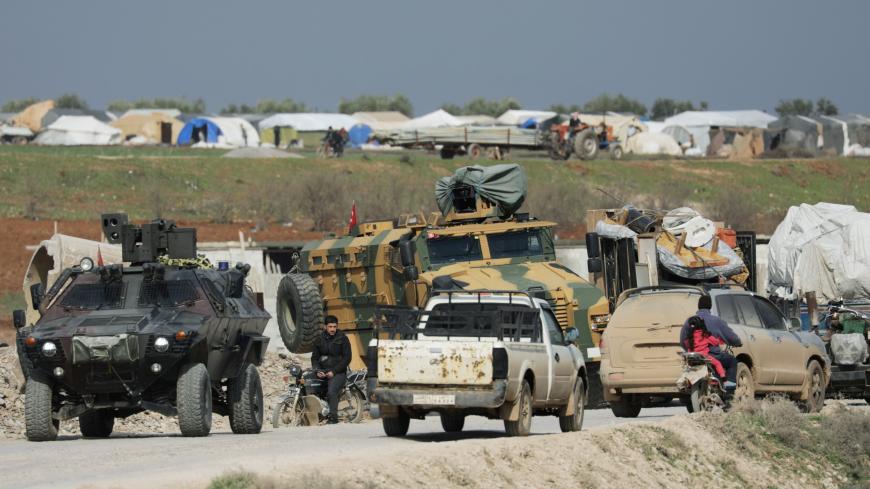 As fighting in Syria’s rebel bastion of Idlib rages on, fueled by a Turkish thrust to reverse government gains, a less palpable but related struggle is under way to the north, where the Syrian Kurds are weighing their options on how to wrestle back Turkish-controlled Afrin.

Held by Turkey and its allied groups since 2018, Afrin has been high on the Kurdish agenda in recent weeks, though the escalation in Idlib has overshadowed tensions in the region. In the words of a local Kurdish source, “Preparation of plans to liberate Afrin was already under way, but with the escalation in Idlib, this became an issue of discussion with Russia and the Syrian regime.”

Keeping a watchful eye on the preparations, Turkey has been shelling the route to Tel Rifaat, which the Kurds have used to retreat from Afrin and launch countermoves in the area.

Last month, Al-Monitor reported about the prospects of the Kurds joining forces with the Syrian army once it secured the M5 highway and regained control of Aleppo’s northwestern countryside to reach the southern boundaries of Afrin. Al-Monitor has learned that contacts took place between the Syrian army and the Afrin Liberation Forces, a group comprised of Kurdish fighters from Afrin, in early February, as the fighting in Idlib intensified. While the Kurds focused on retaking Afrin, Damascus prioritized the prospect of joint action in Idlib. During the contacts, the two sides discussed the terms of Kurdish collaboration with the Syrian army. The Kurds conditioned their involvement in Idlib on a joint thrust on Afrin. The prospect of opening an Afrin front was discussed with the Russians as well.

Yet the option of collaboration with the Kurds moved to the back burner as the Syrian army advanced much faster than expected. Kurdish journalist Roj Musa, who is from Afrin and closely follows the issue, told Al-Monitor, “There were talks between the Afrin Liberation Forces and Russia in the area. Since the Afrin Liberation Forces are comprised of experienced fighters, the Syrian army wanted to engage them to fight Hayat Tahrir al-Sham and other factions in areas in northwestern Aleppo such as Anadan, Kufr Humra and Haritan. Yet, Hayat Tahrir al-Sham and the other groups withdrew quickly from the region [in mid-February] after striking a deal with the regime. As a result, many plans in the region changed, including the one on opening a front to Afrin.” According to Musa, the Syrian army had a confidence boost after significant territorial gains and came to believe it could march on its own on Afrin.

Two additional factors appear to have led to postponing the planned collaboration.

The first stemmed from Russia’s approach. In the past two years, Russia’s posture in the area had sought to prevent Kurdish moves on Afrin, but amid the escalation in Idlib, the Russians have given the Kurds some leeway. Still, the Russians have been reluctant to go too far, wary of giving Turkey the pretext of a “terrorism threat” and “fighting the PKK” in Afrin. Ankara equates the armed Syrian Kurdish groups with the Kurdistan Workers Party (PKK), which has fought Ankara since 1984 and is considered a terrorist group by much of the international community. Nevertheless, a Kurdish front remains in the cards if the conflict in Idlib expands and Russia’s relations with Turkey derail.

Second, the Syrian army turned to southern Idlib once its push in the north of the province reached Mount Sheikh Aqeel, to the south of Afrin, on Feb. 17, probably due to the barrier of the Turkish military presence there. This meant the shelving of plans to advance along the southern periphery of Afrin toward the Bab al-Hawa crossing on the Turkish border or to take control of Afrin to cut the connection between Idlib and the Turkish-controlled Euphrates Shield pocket. Controlling Afrin would be equally important for the Syrian army in any plans to retake the Bab al-Salam border crossing near Azaz, which is Turkey’s main point of entry into the Euphrates Shield pocket and a route to Darat Izza, the gateway to Idlib, via Azaz and Afrin city.

Since last week, however, the battlefield in Idlib has seen dramatic developments, which are raising again the prospect of collaboration between Damascus and the Kurds. On Feb. 27, Hayat Tahrir al-Sham and its allies — propped up by strong Turkish backing —- managed to retake Saraqeb, shortly after the town had fallen, as the Syrian army focused on the al-Ghab Plain and the Jabal al-Zawiya and Jabal Shashabo areas in southern Idlib, seeking to advance to the M4 highway. Apart from its strategic importance as the junction of the M4 and M5 highways, Saraqeb is an area where four Turkish military outposts have been surrounded by government forces. As Turkey continued to send reinforcements to Jabal al-Zawiya to impede the Syrian army, its forces became the target of a ferocious airstrike that left dozens of Turkish troops dead.

With Turkey launching retribution on regime targets, while scrambling for Western support amid faltering ties with Russia, the Kurdish factor is coming back to the fore in what appears to be a new phase in the Syrian conflict. Washington has reportedly cautioned the Kurdish-led Syrian Democratic Forces (SDF), its partner in northeastern Syria, to stay away from the Idlib battlefield. A Kurdish source confirmed that the SDF got a message along those lines from James Jeffrey, the US special Syria envoy, when he visited last month.

Asked how the escalation in Idlib would bear on the Syrian Kurds, another Kurdish source told Al-Monitor, “Because of the situation on the ground, things are very much in flux and the ground for cooperation is very slippery. Nevertheless, I can say that tacit collaboration with the Syrian regime and the Russians is continuing despite the to and fro. They know that things will be harder for them without the Kurds. And for Afrin, too, they will have to eventually team up with the Kurds.”

Stressing that the Kurds had their own preparations for Afrin, the source said, “The Syrian regime, too, wants to take Afrin as soon as possible because it realizes that it accomplish the desired cleansing as long as the connection between Idlib and Azaz via Afrin remains [out of reach]. They will have to take up the issue of collaboration with the Kurds after a while, whether there is a deal or not.”

The Kurds have made no secret of their preparations to try to wrestle back Afrin. That is why the Turkish military has kept the corridor between Afrin and Tel Rifaat under fire. Though many locations have been targeted, the focus appears on four villages, namely Burj al-Kas, Zuq al-Kabir, Kaluta and Bashmara, which are situated in the triangle between Afrin, Darat Izza and the two neighboring towns of al-Zahra and Nubl. Along with Afrin, Darat Izza remains under the control of Turkey and Turkish-backed groups, while al-Zahra and Nubl are controlled by government forces and Iran-backed Shiite militia. The triangle area serves as a bridge between Afrin and Tel Rifaat, where people displaced from Afrin have taken refuge. According to Musa, 880 families live in the four villages, including 159 from Afrin.

The Kurdish People’s Protection Units (YPG) took control of those villages in 2012. Subsequently, they became a supply route for al-Zahra and Nubl after the two Shiite settlements were besieged by rebels from the Free Syrian Army (FSA). The four villages remained under FSA pressure until February 2016, when government forces broke the siege. Since March 2018, the roads linking the villages have been controlled by the Syrian army and Iran-linked militia.

Turkish artillery fire (coupled with constant drone surveillance) has targeted also villages around the towns of Shera and Sherawa in the Afrin region and villages around Tel Rifaat. The YPG is no longer present in the area per se, but the Afrin Liberation Forces, comprised of the same Kurdish fighters, have carried out acts of sabotage against Turkish military positions and Turkish-backed groups across Afrin, mostly in Jindires and Bulbul.