Turkey’s withdrawal in Idlib may be omen of war

Turkey’s decision to evacuate military posts in regime-held areas in Idlib is hardly reassuring when considered against the backdrop of its continued military buildup elsewhere in the region. 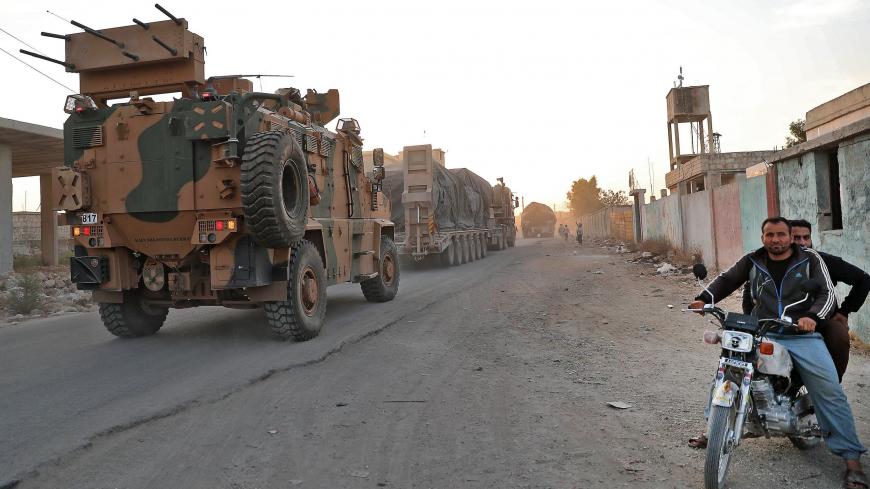 A Turkish military convoy drives through the village of Iblin, near Ariha in Syria's rebel-held northwestern Idlib province on Oct. 20, 2020, after vacating the Morek post in Hama's countryside. - OMAR HAJ KADOUR/AFP via Getty Images

Turkey has begun withdrawing from military observation posts in regime-held enclaves in Idlib, the last rebel stronghold in Syria, but the move looks more like an omen of war for the region than a sign of reconciliation and retreat.

The outpost at Morek, one of several encircled by Syrian government forces since their capture of the key M5 highway in February, was evacuated Oct. 19-20, with others expected to follow suit.

Turkey has been under growing Russian pressure to leave the surrounded outposts. Most recently, the issue was raised at Sept. 16 military talks in Ankara, with the Russian side pressing for Turkey to leave the outposts, reduce its military presence elsewhere, remove its heavy weapons from the region and push armed groups away from the M4 highway, the other key road in Idlib. Simultaneously, local protesters — reportedly mobilized by the Syrian government — held demonstrations around seven of Turkey’s 12 observation posts, urging the Turkish troops to leave.

In another sign of mounting pressure on Ankara, Turkish soldiers were targeted at Marj al-Zohour in late August and Mutaram in early September.

After the violent escalation in Idlib in late February, Ankara had remained adamant on keeping its military outposts, counting on Russian security guarantees. Thanks to safe corridors provided by the Russians, Turkey was able to resupply its troops in the eight encircled bases. Meanwhile, Turkish and Russian troops began joint patrols along the M4 route under a deal the two sides made in Moscow March 5. But in a sign of brewing discord, the Russians were absent from the last five of the 25 patrol missions conducted between March 15 and Aug. 25.

Turkey’s evacuation of the Morek outpost came soon after it ventured into Russia’s backyard in the Caucasus, extending support to Azerbaijan in its long-running conflict with Armenia, including the transfer of militants from Syria. It is very likely that Russia has retracted its security guarantees in Idlib.

Eight Turkish observation posts — at Sheikh Aqil, Anadan, Rashidin, al-Ais, Tell Touqan, al-Surman, Arima and Morek — remained in territories recaptured by regime forces in a Russian-backed offensive that began in May 2019 and culminated in the seizure of the M5 last February. Nine other Turkish bases, set up in a bid to stop the Syrian army, were similarly encircled. Moscow and Damascus launched the offensive on the grounds that Turkey failed to fulfill the terms of the Sochi deal of September 2018, which called for the reopening of the M4 and M5 routes, the creation of a security belt around Idlib and the elimination of terrorist groups from the area. Turkey had set up the observation posts in 2017 and 2018 as part of accords in the Astana process.

Turkey has not officially announced the withdrawal and it remains unknown how many outposts it will evacuate. Syrian opposition sources say the withdrawal was decided in mid-October and covers three areas other than Morek, expected to be evacuated by the end of the year. According to other sources, Turkish troops are already dismantling and packing up military equipment at multiple other locations.

What is motivating Turkey’s withdrawal?

By signing the March 5 deal with Russia after failing to stop the Syrian army, Turkey effectively acquiesced to the regime’s control of the M5, while accepting commitments on the reopening of the M4, the creation of a security zone extending to six kilometers (about four miles) on either side of the road and the elimination of terrorist groups. But while conducting joint patrols with Russia along the M4, Turkey continued to build up its military presence in the area in a bid to hold back the regime forces.

Turkey has sent two or three military convoys per week to Idlib since March 5, setting up some 140 military points equipped with armored vehicles, tanks, howitzers and air defense weapons around the M4 road. According to the Syrian Observatory of Human Rights, more than 10,600 Turkish military vehicles entered Idlib from Feb. 2 to Oct. 20.

The expanse and layout of Turkey’s deployment speak of an effort to raise a barrier against a possible thrust by the Syrian army.

As the 170-vehicle convoy that left Morek retreated to the Jabal al-Zawiya region, another Turkish convoy of tanks and other military vehicles crossed from the border province of Hatay to Idlib, and Turkish troops set up a new base in the village of Kokin in Jabal al-Zawiya and deployed to the village of Karatah in southern Idlib. Military preparations were also reported at a Turkish base at Taftanaz in eastern Idlib.

Since the March 5 deal, Turkey has also sought to enhance its control over the armed groups holding sway in Idlib. There is an ongoing effort, coordinated by Turkish intelligence, to unite Hayat Tahrir al-Sham (HTS), the dominant outfit in Idlib, and the Turkish-backed Syrian National Army and National Front for Liberation (NFL) under the banner of a joint military council. HTS, meanwhile, has sought to suppress al-Qaeda-linked rival factions.

Remarkably, HTS and its partners have focused on military training in the past eight months under Turkey’s protective umbrella. Last week, NFL fighters completed training on nocturnal warfare tactics, designed to overcome shortcomings ahead of the next faceoff with the Syrian army.

The Syrian army, meanwhile, has been busy reinforcing positions on several routes. An ongoing military buildup on the western Aleppan front, centered at Saraqib, has been accompanied by a flurry of military activity, including bombings, in the Jabal al-Zawiya and Ghab Plain regions in southern Idlib and the northeastern Latakia countryside.

Turkey’s withdrawal from observation posts may appear to be acquiescence to Russian pressure at first glance, but its military activities around the M4 speak of fresh war preparations. The escalation on the ground might grow into a military showdown engulfing Turkish troops. In such a scenario, the Turkish observation posts would effectively fall hostage to Damascus, so keeping the troops at the outposts is not really logical. In other words, Turkey’s backing down on the outposts is likely motivated by an intent to hold defendable positions and respond in kind in the event of clashes.

Thus, Turkey remains bent on preventing the Syrian army from transcending the M4 and advancing toward the Turkish border. Any Turkish concession in Idlib is conditioned on Turkish control of Tell Rifat and Manbij, where Kurdish forces have deployed since their retreat from Afrin in 2018, when Turkey seized the region as part of efforts to undo Kurdish gains in Syria.

In a broader sense, Turkish President Recep Tayyip Erdogan remains bent on creating a security belt with a depth of up to 40 kilometers (25 miles) along the border despite Russian and American stumbling blocks. At present, the belt stretches contiguously from Idlib and Afrin to Jarablus, but gets interrupted at Kurdish-held Kobani. In another incursion to curb the Kurds, Turkey took control of the area between Tell Abyad and Ras al-Ain to the east of Kobani in October 2019. Hence, connecting the two stretches at Kobani is now Turkey’s primary objective, the achievement of which might lead it to press ahead all the way to Derik on the easternmost edge of the border. On Oct. 7, the Turkish Parliament extended the government’s mandate for cross-border military operations for another year. Thus, the obstacles for Erdogan stem not from domestic politics, but the conditions on the ground in Syria and the international arena.

In sum, Turkey’s military buildup in Idlib may appear a deterrence effort, but is clearly setting a stage where a small spark might ignite a destructive war.