Turkey is struggling to maintain a balance with Russia as it takes action to block the Syrian army at Idlib. 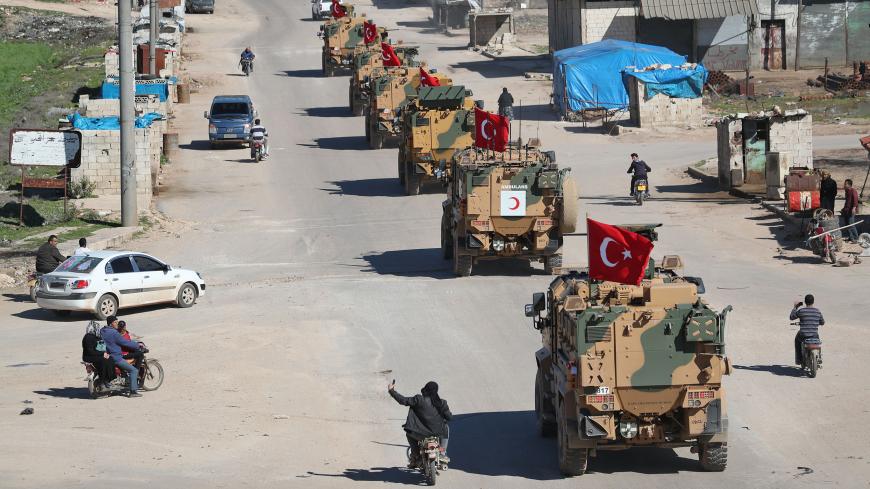 A column of armored Turkish military vehicles drives on a patrol along a road in the demilitarized zone, Saraqib, Idlib, Syria, March 8, 2019. - OMAR HAJ KADOUR/AFP/Getty Images

As the Syrian regime's offensive against Idlib continues, Turkey has to pull off two contradictory missions in Syria’s last rebel stronghold: Save Tell Rifaat and Idlib at the same time.

Russia and the Syrian regime launched air and ground operations against rebels in Idlib on April 28. While Turkey tries to prevent the operation from becoming an all-out war, it has been baffled by three major developments.

First, the Turkish army and its allied militias have turned toward Tell Rifaat, where the Kurdish People’s Protection Units (YPG) are based. It has raised questions about whether Turkey is bargaining for Tell Rifaat for Idlib and thus selling out its opposition allies.

Second, the Turkish army did not react when two of its 12 observation posts in the de-escalation zone were caught in the crossfire. Has Turkey agreed to a limited operation to fulfill the stipulations of the Sochi accord? Russia has stated it is coordinating with Turkey, further nourishing this suspicion. According to the Sochi accord, signed in September 2018, all heavy weapons and militants were to be removed from a buffer zone around Idlib by Oct. 10 and 15, respectively. Furthermore, the M-4 Aleppo-Latakia and M-5 Aleppo-Hama highways would be opened to traffic. These terms were not met, and Turkey couldn’t put an end to clashes in Idlib.

Third, Russia did not wait for an agreement with Turkey and went ahead and opened the way for the Syrian army, which was itching to take Idlib, even though Ankara-Moscow contacts continue. Turkey, in search of a cease-fire, increased its support of armed groups and secured some kind of balance on the ground.

Developments on the ground and in diplomacy further substantiate the above scenarios. The only scenario that doesn’t change is for Turkey to halt the Syrian army's advances.

This is the current overall picture: Russia, while conducting its Idlib offensive, withdrew its forces from Tell Rifaat, opening the way for Turkey. But this wasn’t enough for Turkish success in Tell Rifaat. Opposing the expansion of Turkish control, the Syrian army filled the vacuum and the YPG resisted Turkey’s Tell Rifaat move, effectively halting it.

The scenario of give-and-take was further invalidated when the Syrian army fired its weapons near Turkish observation posts at Jabal al-Zawiya and Morek in late April and early May. It was speculated that the Turkish army could abandon its observation posts in return for a temporary cease-fire. Instead, Turkey fortified its posts. Seven truckloads of 12-ton concrete blocks arrived at observation posts around Idlib.

In the meantime, Turkey's chief of staff and foreign and defense ministries reached out to Russia to stop its operations.

Both Russia and Turkey spoke cautiously, careful not to offend the other. President Recep Tayyip Erdogan, in a phone call with Putin, did not mention Russia when he accused Damascus of sabotaging Russia-Turkish cooperation and violating the spirit of Astana.

Although Russia criticized Turkey for not fulfilling its obligations, it acknowledged that it was still coordinating with Turkey. In other words, Russia also avoided making it a Russia-Turkey issue.

Despite their subtle statements, both sides are not continuing with their schemes. Ahrar al-Sham, Jabhat al-Sharqiya and Shuhada al-Sharqiya were transferred from Turkish army-controlled areas to the front line south of Idlib and northwest of Hama. Youssef Hammoud, the spokesman of the Syrian National Army group, which is trained and equipped by Turkey, declared, “Many of our fighters joined the front with their guns to fight the enemy [the regime].”

Hayat Tahrir al-Sham (HTS), a terror organization, also joined the combat alongside the above groups. The former allies were once again reunited after trying to wipe each other out in Idlib in 2008. As proof of the new alliance, photographs of HTS leader Abu Mohammad al-Golani were distributed, depicting him at a meeting with members of Ahrar al-Sham, Faylaq al-Sham and Suqour al-Sham, as well as with commanders of Jaish al-Izza and Jaish al-Nasr, who had received TOW anti-tank missiles from the United States.

The effectiveness of Turkish support was further confirmed by a statement from Suheil al-Hassan, commander of the Syrian army's Tiger Forces, to his soldiers at the Kfar Nabuda front. “You are fighting the fiercest type of enemy and the worst kind," he said. "You are fighting US and Turkish special forces.”

Some find Turkish support inadequate. Fawaz Hilal, the leader of the Salvation Government in Idlib, established by HTS, made an appeal to Ankara: “Permission was given to set up Turkish observation posts with the hope they will protect the people. But reality shows that these outposts cannot even protect themselves. We hope Turkey defends these outposts and the areas they are located at and also prevents flights of Russian and Syrian jets and their airstrikes. But bombing of these outposts and wounding of Turkish soldiers creates questions. Turkey must clarify its role and what it wants to achieve with these outposts.”

Armed opposition groups have been accused of firing rockets and mortars at regime forces from within the vicinity of Turkish observation posts. The armed groups see the posts as safe areas, but they are also turning the outposts into targets. Meanwhile, civilian groups are also speaking out against Turkey. A big crowd in the nothern Syrian town of Atme marched to the Turkish border on May 31 and called on Turkey to “either stop the massacres or open the border.”

In view of such developments on the ground, Erdogan called Russian President Vladimir Putin on May 30 to ask for an immediate cease-fire and a political settlement.

Kremlin spokesman Dmitry Peskov, referring to the conversation, said, “We really do need a cease-fire in Idlib and what needs to be achieved is for the terrorists to stop firing on civilian targets and on certain facilities where our troops are located. … This is the responsibility of the Turkish side."

Pro-Kurdish media outlets claimed that Turkey insisted on taking over Tell Rifaat in return for the areas Syrian army captured in Gab and south of Idlib after April 28. But there was no response to Turkish requests. In the fourth week of the Idlib operation, Russia sent the troops it had withdrawn back to Tell Rifaat. Russia opened two evacuation corridors at Suran and Abu Zuhr and called on people to evacuate the areas of the clash, indicating that it is determined to continue operations.

It's unclear how deeply Turkey and Russia are manipulating tensions. Russia has limited its targets at Idlib, citing the Sochi accord. But it also does not want to endanger Turkey's decision to purchase the S-400 missile system. Even if the Russians are not allowed to reach the center of Idlib, the opening of the M4 and M5 highways may be big enough moves in the first phase. Turkey is careful not disrupt its relations with Russia, yet it is demonstrating that it will not allow for a repeat in Idlib of such scenarios as eastern Aleppo, eastern Ghouta and Quneitra. The US call for a cease-fire in Idlib at this time also improves Turkey’s hand.

A Turkish official explained Turkey's logic to Middle East Eye: “Without controlling Idlib, it would be almost impossible to secure Turkish-controlled Afrin and enclaves along the border.”

According to this approach, if the tension is confined to Idlib, there will be no action against Afrin and the Jarablus-Azaz-al-Bab triangle.

But developments have rendered the Sochi accord irrelevant. Turkey had committed to separating opposition groups from al-Qaeda-linked organizations and reining in their attacks. The new Idlib front has now reunited the Syrian National Army and National Liberation Front, which are under Turkish tutelage, with HTS and Huras al-Din (Guardians of Religion Organization) and foreign groups like Muhajireen wal Ansar and the Turkistan Islamic Party.

In a nutshell, the mission that Turkey had taken on has crumbled.