As the Astana process seizes the initiative on Syria, the United States could put Israel-Lebanon shuttle diplomacy to the test on Hezbollah. 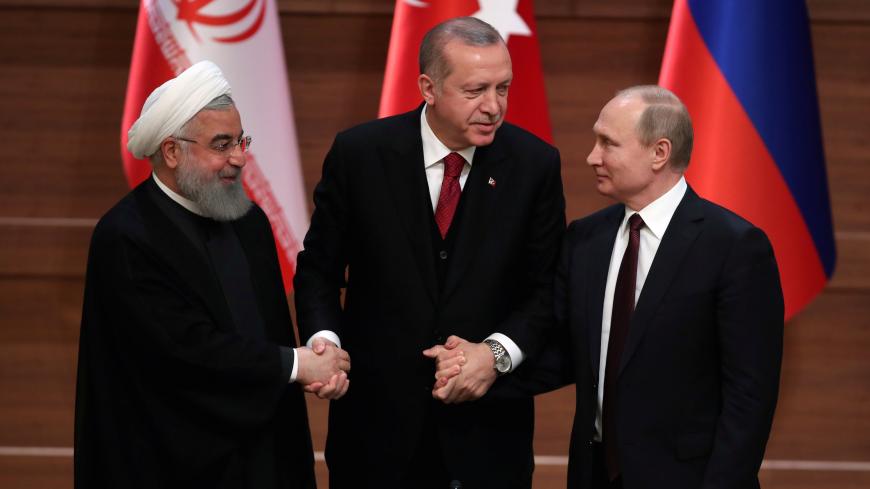 The same week that US President Donald Trump announced his intention to “get out” of Syria and withdraw the remaining 2,000 American troops there “very soon,” the leaders of Russia, Turkey and Iran were once again meeting to chart Syria’s future.

Maxim Suchkov writes, “The leaders have come to believe the real shots regarding Syria are being called in the meetings among themselves. And while Geneva is stalled, if not comatose, conditions on the ground are fast-changing. These three stakeholders in the Syria conflict feel they’d be better positioned to drive change themselves rather than waiting until it starts.”

The Astana framework, established by Moscow, Ankara and Tehran in January 2017, has now eclipsed the UN-backed Geneva process, despite the perfunctory reference to Geneva in the Ankara summit statement. The statement supported both the integration of a constitutional committee, resulting from the Syrian National Dialogue Congress held Jan. 30 in Sochi, Russia, into the Geneva framework, and the Astana working group established March 15 to deal with the “release of detainees/abductees and handover of the bodies as well as the identification of missing persons.”

Suchkov adds, “The three presidents also agreed 'to step up trilateral coordination in all aspects of anti-terrorist activity and increase information exchange,’ which implies constant cooperation of the militaries and intelligence services. They also declared they will focus on humanitarian efforts. Their joint statement emphasized they are determined to 'speed up efforts to ensure calm on the ground' and expedite the return of refugees. … Russia and Turkey will also build a hospital in Syria’s city of Tell Abyad to treat refugees escaping eastern Ghouta.”

Amberin Zaman points out that “the picture of unity displayed by the leaders, however, belied the extent to which they also differ in their respective priorities in Syria. For Turkey it is to dismantle PYD [Democratic Union Party] rule. For Iran, it is to ensure the regime of Syrian President Bashar al-Assad remains intact. For Russia, it is to consolidate its strategic foothold in the eastern Mediterranean through a mix of diplomatic dexterity and military muscle.”

“Ankara wants the Pentagon to partner with rebel groups it mentors instead, foremost in Manbij, an Arab-majority town the coalition helped YPG forces wrest from IS in August 2015,” Zaman continues. “Brett McGurk, the US special envoy for the counter-IS fight at the State Department, outlined the difficulties of the Turkish plan at a US Institute of Peace panel yesterday [April 3]. He dwelled in particular on the Islamist nature of Turkey’s rebel allies, which is why the Pentagon remains leery of working with them. McGurk reminded a packed audience that the reason the United States partnered with the YPG [People's Protection Units] to take Manbij, where major attacks against the West had been planned, was because earlier attempts to do so with the Turkish-backed rebels had failed. The clearing of Manbij in turn facilitated Turkey’s own Euphrates Shield operation against IS [Islamic State] in Jarablus soon after.”

“In this regard,” Suchkov writes, “shifting Syrian demographics — including forced displacement of one ethnic group for others — and the future of Idlib, which increasingly looks like a dumping ground for radical groups, raise security concerns in Tehran and Damascus. Some in Russia suggest Turkey is working these factors to ensure leverage over Assad and to have a louder voice in the future political transition. … If that's the case, Rouhani’s reported call for Turkish forces to hand over the Syrian region of Afrin to the Syrian army signals that Iran wants to further empower Assad. This should be seen as disguised concern about a potential rise in Turkey’s role in northern Syria and in determining the country's political future.”

Hamidreza Azizi explains how the differing perspectives and positions among the Astana parties is playing out with regard to the Syrian government’s offensive against armed groups in eastern Ghouta. Iran, Azizi writes, has “refrained from any active involvement [in the military campaign], preferring instead to leave the task to Moscow and Damascus. Although Iran has always declared that its military involvement in Syria is of an advisory nature, this time there were no reports of the presence of Iranian military commanders in the Syrian war room nor even pro-Iran fighters in eastern Ghouta.”

“It seems more than a coincidence that Turkey’s military operation in Afrin was going on at the same time as the Russian-Syrian operation in eastern Ghouta,” Azizi continues. “In other words, given that Iran adopted a more or less neutral stance toward both operations — though it did make some statements to condemn the Turkish move — there is a possibility that recent developments have largely been the result of a deal between Tehran, Moscow and Ankara as the three pillars of the Astana track. As part of it, Iran might have agreed to adopt a lower profile on both Afrin and Ghouta in order to gain Ankara’s consent to the Syrian government’s operation in the eastern suburbs of Damascus.”

With regard to what the Trump administration may do next, James Dobbins and Jeffrey Martini of RAND suggest that “the United States could offer to fully withdraw its forces from Syria and normalize relations with the government in Damascus once all foreign militias have also left the country. Assad has won the civil war. If he wants to keep Russian and Iranian advisers, there is little to stop him. But Hezbollah fighters should return to Lebanon, and the thousands of other Shiite militias should return to Afghanistan and the other lands from whence they came. If they do not and instead they remain and bring their families, the ethnic makeup of the country will be permanently altered and Israel will permanently face an Iranian proxy on a second front.”

We explained here in February how the shuttle diplomacy of US Acting Assistant Secretary of State David Satterfield to address the “Block 9” dispute between Israel and Lebanon may have opened the door to a channel for dialogue with and about Hezbollah. “There can be no talk about Block 9,” we wrote, “without discussing the Blue Line, the disputed border demarcation between Israel and Lebanon, which cannot be disentangled from the Syria question, which in turn is connected to the relationships between the United States, Israel and Iran. The Satterfield mission and the prospects of a back channel to Hezbollah and Iran, via the Lebanese government, may provide an opening to de-escalating a potential conflict on Israel’s borders, while beginning the needed spadework for an eventual settlement of Israel-Lebanon border issues.”

And three weeks ago we wrote that “Lebanese President Michel Aoun said Hezbollah’s arms will be discussed following the May 6 elections. Aoun could not make such a statement without the nod from Hezbollah, so this is worth exploring. Back in 2013, three years before he became president, Aoun told Al-Monitor, ‘I think Iran was using Hezbollah to make pressure on Israel. When the problem is settled up, the Iranians don’t need Hezbollah anymore. Certainly they will have good relations — it doesn't harm us. We would like to have good relations with everybody. But as a normal choice, Iran — I don’t think they will spend enough money to maintain this force, because it is very expensive.’”

The point here is that the United States has cards to play in the unfolding and complicated diplomacy on Syria. But it requires coordination with Lebanon, the Astana parties and the United Nations. In this column in February we concluded that “whatever the tension between Russia, Turkey and Iran on Syria, what still holds, at least for now, is a shaky commitment of the three parties to the Astana process itself. UN Syria envoy Staffan de Mistura showed up in Sochi [in January] as a kind of bystander, because that is the only lifeline available for the Geneva process, and there is an urgency to a revived diplomatic track.”