Erdogan, Putin, Rouhani tout alliance, eye US for next move

The presidents of Turkey, Russia and Iran emerged from a summit on Syria as a united front, though the image hardly indicates an alignment in their priorities. 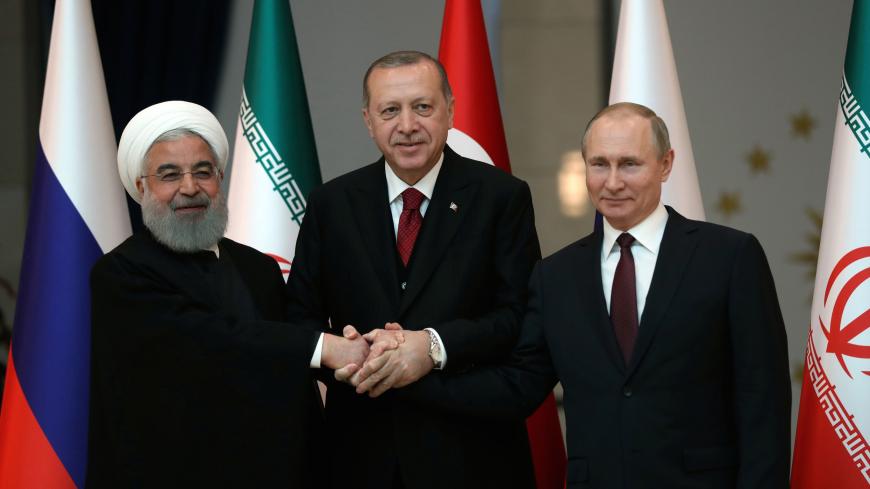 Speaking at a joint press conference, Erdogan said, “Turkey will not stop until all regions under PYD/PKK control, including Manbij, are secured. … We will never allow either Syria or our region to be attacked by a few terrorist groups.” The PYD is the acronym for the Democratic Union Party, the dominant Kurdish group in northern Syria whose armed wing, known as the People’s Protections Units (YPG), is the US-led coalition’s top ground force in the fight against the Islamic State. PKK is short for the Kurdistan Workers Party, the militia that is fighting for Kurdish self-rule inside Turkey and is closely allied with the PYD. Turkey says they are one and the same.

The summit to discuss the trio’s future steps in Syria is part of the so-called Astana process to end hostilities between regime forces and opposition rebels through a series of cease-fires, the establishment of humanitarian corridors and the deployment of peace monitors in the country's north, west and south, which fall outside the United States’ zone of influence. Of immediate concern is the fate of Idlib province, the last remaining rebel stronghold on the Turkish border where infighting among jihadi groups is weakening their grip.

In a statement issued at the conclusion of the summit, the three presidents declared there was no military solution to the seven-year Syrian conflict and "reiterated the necessity to assist the Syrians in restoring the unity of their country and in achieving a political solution of the ongoing conflict through an inclusive, free, fair and transparent Syrian-led and Syrian-owned process."

The picture of unity displayed by the leaders, however, belied the extent to which they also differ in their respective priorities in Syria. For Turkey it is to dismantle PYD rule. For Iran, it is to ensure the regime of Syrian President Bashar al-Assad remains intact. For Russia, it is to consolidate its strategic foothold in the eastern Mediterranean though a mix of diplomatic dexterity and military muscle.

In comments carried by Iran’s official news agency IRNA, Rouhani repeated calls for the United States to go. “The fact is that the illegal presence and interference of the United States in Syria lead to the increase of tension and the country’s disintegration,” he said. Iran’s state television quoted Rouhani as also telling Erdogan and Putin that Turkey must hand control of the mainly Kurdish enclave of Afrin, which it captured last month from the YPG, back to the Syrian regime.

All must have been dazed by the flurry of conflicting messages coming out of Washington as to whether some 2,000 US special operations forces will remain in Syria. Over the past week President Donald Trump said twice that US forces would be leaving soon. Today, US officials quoted by Reuters affirmed that the president still wants the troops to return but had reluctantly agreed to their continued deployment until IS is defeated.

Turkey is fiercely opposed to an American presence that relies on the YPG, but is equally alarmed at the prospect of a hasty US withdrawal that would see sophisticated weapons given to the Kurds to fight IS left in Kurdish hands. Erdogan reportedly aired those concerns in his April 2 telephone conversation with Trump, sources familiar with the substance of the exchange told Al-Monitor.

Ankara wants the Pentagon to partner with rebel groups it mentors instead, foremost in Manbij, an Arab-majority town the coalition helped YPG forces wrest from IS in August 2015. Manbij lies just to the west of the Euphrates River, which Turkey labeled a red line the Syrian Kurds must not breach. The Pentagon’s failure to fulfill pledges to end the YPG presence once Manbij fell sparked escalating tensions between Ankara and Washington, culminating in veiled threats by Erdogan to confront US forces in Manbij if need be.

Brett McGurk, the US special envoy for the counter-IS fight at the State Department, outlined the difficulties of the Turkish plan at a US Institute of Peace panel yesterday. He dwelled in particular on the Islamist nature of Turkey’s rebel allies, which is why the Pentagon remains leery of working with them.

McGurk reminded a packed audience that the reason the United States partnered with the YPG to take Manbij, where major attacks against the West had been planned, was because earlier attempts to do so with the Turkish-backed rebels had failed. The clearing of Manbij in turn facilitated Turkey’s own Euphrates Shield operation against IS in Jarablus soon after. McGurk said, “The complexity of this … is not just US-Turkey conversation, it is on the ground in Syria. … These are mostly people from Manbij, there are Arabs that live in Manbij, but the people working with the Turks are also from Manbij, but they have a very different orientation." He said that many of the opposition groups outside of Manbij have "a more Islamist orientation, where in Manbij right now some women are covered, some are not. It is a much more, for lack of a better word, secular environment.”