Turkey chides US for failing to honor Manbij accord

Ankara is caught between two superpowers that are pursuing their own agendas in Syria, while its efforts to implement its own agenda there only seem to be growing more difficult with time. 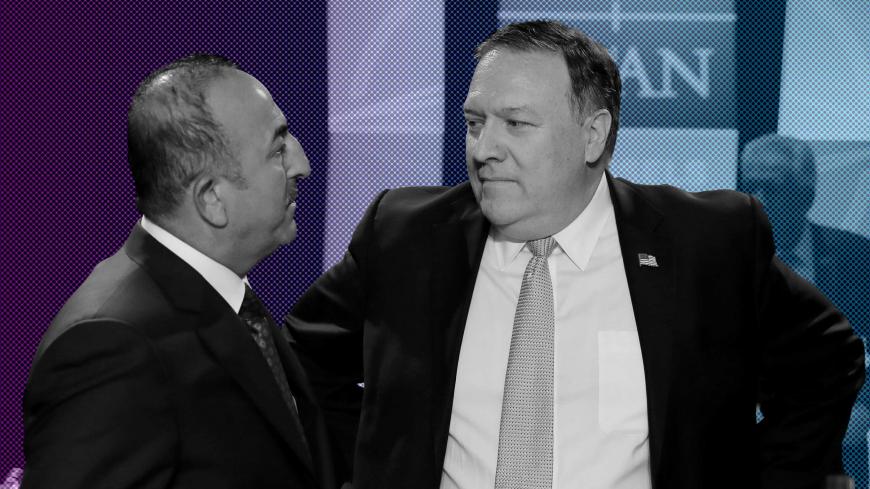 Turkey's Foreign Minister Mevlut Cavusoglu and US Secretary of State Mike Pompeo take part in a working dinner at the Park of the Cinquantenaire, during a NATO Summit in central Brussels, Belgium, July 11, 2018. - REUTERS/Yves Herman

Turkey has been preoccupied for weeks with trying to prevent a Russian-backed operation by the Syrian regime against Idlib. But the developments in Manbij, the city just west of the Euphrates that is under control of the US-armed Syrian Democratic Forces (SDF), continue to be of prime concern for Ankara.

The deal brokered by President Recep Tayyip Erdogan and Russian President Vladimir Putin over the weekend, forestalling an attack against Idlib for the time being, is expected to refocus Ankara’s attention on this issue.

The main fighting force in the SDF is the Kurdish People's Protection Units (YPG), which is considered by Ankara to be a terrorist organization that poses an existential threat to Turkey’s security.

This has been the principal issue that not only underlies the rupture between Turkey and the United States in Syria, but which has also pushed Ankara into Moscow’s orbit there despite Turkish-Russian differences over a number of issues in Syria — including the future of Idlib.

Ankara and Washington concluded a “roadmap” on June 4 that aimed to defuse tensions between the two, which were compounded by Turkey’s threats of military action against the YPG in Manbij.

The deal brokered by Turkish Foreign Minister Mevlut Cavusoglu and US Secretary of State Mike Pompeo foresaw the evacuation of all YPG elements from the region and the start of joint Turkish-US patrols inside Manbij city. All of this is to be concluded within 90 days of the announcement of the roadmap.

At least this was the reading of the roadmap by Ankara. The full details of what was actually agreed on were never officially made public. What we know about the roadmap is that it is mostly based on leaks to the press by the Turkish side.

Ankara is complaining now that the United States is dragging its feet over this agreement. President Recep Tayyip Erdogan spelled this out while talking to reporters on his presidential plane on Sept. 3 as he was flying back from a visit to Kyrgyzstan.

“The job is being delayed. We have to see this fact. We are not at an ideal point. The agreement that we had reached is not being implemented in the right direction,” Erdogan said.

Ankara has also been watching with concern as the United States reportedly continues to consolidate its hold over Manbij and a large swath of Syrian territory east of the Euphrates River — which is also controlled by the SDF — and beefs up the YPG’s military capabilities.

Erdogan has publicly announced that the Turkish military will move against YPG positions east of the Euphrates after Manbij is purged of this group.

Turkey has yet to secure what it wants in Manbij, though, and the growing feeling in Ankara is that Washington is using the roadmap agreed on in June to buy time as it consolidates its hold over northern Syria.

Meanwhile, the breakdown in Turkish-US ties over multiple issues, including the arrest and imprisonment by Turkey of American pastor Andrew Brunson on terrorism charges, has hampered cooperation between Ankara and Washington in Manbij.

"Coordinated but independent patrols” by Turkish and US forces started shortly after the roadmap was announced in June, but these are being conducted along the line of demarcation on the outskirts of Manbij and are far from satisfying Ankara.

The joint patrols in Manbij city that Ankara wants, on the other hand, are nowhere in sight — even though these were to start well within 90 days of the announcement of the roadmap, according to the Turkish side.

Remarks by Pentagon Spokesman Eric Pahon in an interview with Hurriyet Daily News last week merely served to heighten Turkish suspicions in this regard. Asked about Turkish complaints regarding US delays in Manbij, Pahon characterized the issue as “a complex one” and went on to utter remarks that angered Turkish officials — even though Ankara did not respond to these remarks officially.

“The Turks are not going to come into Manbij for the foreseeable future. No, they will not be in the city limits of Manbij,” Pahon said.

He added that these patrols would in any event not be taking place in the city center but would be outside the city limits.

Reminded about President Donald Trump’s promise to pull US forces out of Syria, Pahon also indicated that this would not be happening anytime soon.

Pahon’s remarks come amid press reports that Washington is seeking the participation of all Syrian political forces in any constitutional settlement for Syria.

Hurriyet Daily News cited a “non-paper” Washington presented to the United Nations recently, which maintains that “the Syrian government and representatives from northern Syria” should be included in any Syrian settlement.

According to the document, a copy of which the paper said it obtained in Washington, authority in Syria “should be explicitly devolved and decentralized, including on a regional basis.” It does not mention the Kurds by name, though.

A “non-paper” is diplomatic jargon for a document that floats ideas that are ultimately not binding but are nevertheless indicative with regard to what is desired.

Any degree of autonomy for the Syrian Kurds is a nightmare scenario for Turkey. Ankara opposes another Kurdish region along its borders, in addition to Kurdish Northern Iraq, fearing that this will encourage its own restive Kurds.

Turkey’s problem, however, is that Moscow also supports representation for the Syrian Kurds in Syria and has encouraged the YPG and its umbrella organization, the Democratic Union Party (PYD), to open negotiations with Damascus.

Turkey says the YPG and the PYD are extensions of the outlawed Kurdistan Workers Party (PKK), which has been waging a terrorist campaign in Turkey for independence or regional autonomy for the Kurds for over 30 years.

Retired Brig. Gen. Nejat Eslen argues that if the points in Washington’s non-paper are accepted, this would also mean accepting the division of Syria.

Writing for the internet news portal Oda TV, Eslen added, “This would mean that the structure set up by the PKK-PYD east of the Euphrates becomes legitimate.”

“The real aim here is to get hold of the Euphrates-Tigris basins, which are rich in water and energy resources, and the ultimate target is Turkey,” Eslen argued, reflecting a widespread concern among Turks.

This assertion was echoed by Ibrahim Karagul, the firebrand editor-in-chief of the pro-government Yeni Safak newspaper, who contended in an editorial that the real threat for Ankara was not in Idlib but in regions east of the Euphrates.

“The extremely dangerous plan being implemented by the US and the PKK is to join this region to northern Iraq in a manner that incorporates the country’s oil wealth and to then reach the Mediterranean,” Karagul contended.

Meanwhile, Cavusoglu sent a letter to the The New York Times last week in an effort to focus debate back on the YPG.

He argued that the YPG, “which has received arms and aid paid for by American taxpayers, has forged an alliance with Mr. [Bashar al-] Assad and is sending troops as part of a deal brokered in July to help him recapture Idlib from the rebels.”

Cavusoglu said, “It’s time for Washington to assess who its real allies in the region are.”

This letter comes at a time when there are calls in Washington on Ankara to do the exact same, given that Turkey appears to be drifting away from the West and into Russia’s orbit.

Meanwhile, Erdogan continues to aim vitriolic barbs at the United States, accusing it of trying to weaken Turkey by every means possible, including the use of “economic weapons.”

All of this is happening at a time when there are also nagging doubts in Turkey about Russia’s reliability as a partner in Syria — especially with regard to Idlib, the Russian determination to continue backing Assad and, most significantly, Moscow’s backing of some Kurdish aspirations.

Ankara is caught between two superpowers that are pursuing their own agendas in Syria, while its efforts to implement its own agenda there only seem to be growing more difficult with time.