US, Turkey agree on Manbij road map, but when will they get there?

Ankara is pleased with Washington’s endorsement of a plan to rid Manbij of YPG fighters, but many questions remain and the plan’s implementation could take time. 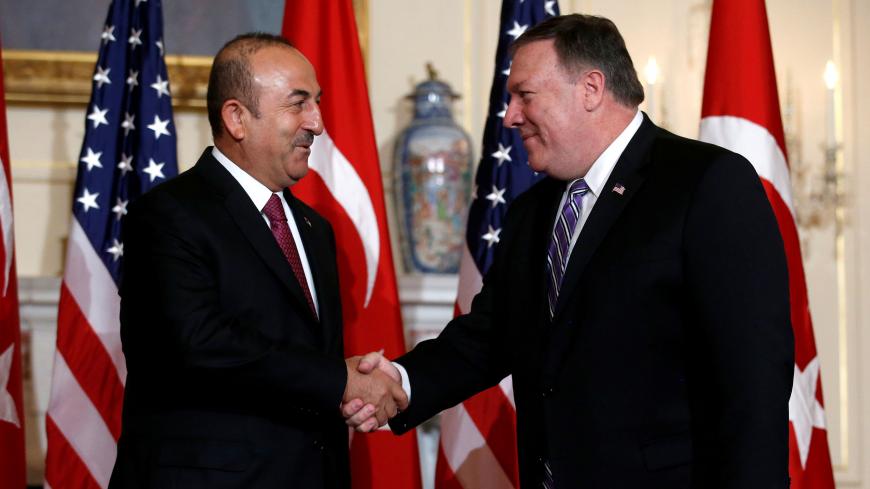 Turkish Foreign Minister Mevlut Cavusoglu is pleased with the results of his talks with US Secretary of State Mike Pompeo in Washington on June 4.

Taken at face value, Ankara seems to have scored something of a diplomatic success by convincing Washington to come around to its position regarding the presence of the Kurdish People's Protection Units (YPG) in the northern Syrian city of Manbij. This will also provide a welcome boost to President Recep Tayyip Erdogan and his Justice and Development Party ahead of the crucial presidential and parliamentary elections June 24. However, many questions about the deal struck by Ankara and Washington remain.

The joint statement issued after the June 4 Cavusoglu-Pompeo meeting said the sides had “endorsed a road map” on how to proceed in Manbij. It added that they had also underlined their mutual commitment to implementing the road map. Little was provided, however, about the details of what was actually agreed on. Most of the information about the “road map” has been coming from the Turkish side, while Washington has refrained from going on the record in this regard.

Remarks by Cavusoglu and from American officials who spoke on condition of anonymity show that there is still much work to be done before the agreement comes into force.

Ankara sees the US-backed YPG and its political wing, the Democratic Union Party (PYD), as terrorist groups linked to the separatist Kurdistan Workers Party (PKK). Turkey says these groups pose an existential threat to the country’s security. Although the United States has the PKK down as a terrorist group, it has been working with the YPG in Syria against the Islamic State (IS).

Turkey has vowed to clear the whole region along its borders with Syria, right up to the Iraq border, of YPG elements, with or without US support, raising the specter of a military standoff between the two NATO allies if a solution to the problem can’t be found. Turkey launched its successful Olive Branch operation in January against the YPG in the city of Afrin, in northern Syria, to underline its determination in this regard.

The United States, which has no forces in Afrin — unlike Manbij — could do little as its YPG allies were driven out of Afrin by the Turkish military and the Free Syrian Army, after Moscow gave the green light to the Turkish operation.

Cavusoglu told Turkish reporters in Washington, following his talks with Pompeo, that the agreed upon road map would be implemented according to a timetable. This, he said, entails the expulsion of the YPG from Manbij, the clearing of YPG and PYD elements from local administrations and the establishment of joint security and administrative structures for the city by Turkey and the United States.

The Turkish media, for its part, had provided concrete details about the Manbij road map before the Cavusoglu-Pompeo talks. According to these, the YPG would leave Manbij in 30 days, joint Turkish-US military patrols would start in the city within 45 days and local administrative bodies comprising groups endorsed by Ankara and Washington would be set up within 60 days of the Cavusoglu-Pompeo talks.

Cavusoglu’s remarks to Turkish reporters in Washington showed, however, that nothing should be expected to happen in Manbij in the coming days, or weeks.

He said preliminary work regarding the parameters of the plan to evacuate the YPG from Manbij still needed to be worked out. After these parameters are determined, Cavusoglu said, work would begin to establish the local government in Manbij, purged of the YPG and PYD, and to determine how security would be provided in the city by Turkey and the United States.

Cavusoglu also said that the timetable for implementing the road map reported by the Turkish media was incorrect. “There is a clear date, but this will depend on the steps we take with our friends in the field. We are talking about a number of months, not six months or so. This has to be less than six months,” Cavusoglu said.

The pro-government media in Turkey has taken these vague remarks as confirmation that the deal struck with Washington will be implemented within six months. Press reports from Washington, however, show that the American side is reluctant to give a specific timeline for the implementation of the Manbij road map.

Hurriyet’s Washington correspondent Cansu Camlibel cited an unnamed US official involved in the negotiations with Turkey as saying the “implementation stage would not be easy and its timeline would depend very much on developments in the field.”

There are also those on the Turkish side who suspect that Washington may have merely kicked the can down the road by endorsing a road map whose complicated details have still to be worked out in order to appease Turkey at a critical juncture in the Syrian crisis.

Erdogan foreign policy adviser Ilnur Cevik is among the cautious ones. “The past performance of the Americans on Manbij and how they still insist on supporting PKK-affiliated militants in Syria makes you wonder if utmost caution is needed on the matter,” Cevik wrote in an article for Daily Sabah.

The YPG announcement a day after the Cavusoglu-Pompeo talks that it was pulling its military advisers out of Manbij was also taken with a grain of salt by Ankara. The semi-official Anadolu News Agency quoted Col. Thomas Veale, the spokesman for the US-led coalition in Syria, who said on the same day as the YPG announcement that there had been no operational changes in Manbij yet. Veale also added that everything would be determined by the continuing negotiations between Turkey and the United States, as well as developments in the field.

Camlibel said US officials briefing the press on the Manbij road map on condition of anonymity had confirmed that the intention was ultimately to relocate YPG fighters in Manbij to east of the Euphrates River. This, however, is at odds with Cavusoglu’s remarks that the Manbij model would be used to clear the YPG from the whole of northern Syria, up to the Iraqi border.

Camlibel pointed to a statement issued by Pompeo, a day after his talks with Cavusoglu, in which the secretary of state underlined continuing US support for the Syrian Democratic Forces (SDF) in its fight against IS east of the Euphrates. She argued that the timing of Pompeo’s statement was designed to show that the agreement with Turkey over Manbij does not mean the United States is giving up on the SDF, whose backbone is provided by the YPG.

Although Manbij has become a vital issue, it is not the only problem clouding Turkish-American ties. A host of unresolved problems, including Turkey’s purchase of S-400 anti-ballistic missile systems from Russia and the incarceration of an American pastor in Turkey on what Washington says are trumped-up terrorism charges, continue to influence these ties negatively.

Ankara’s failure to get Fethullah Gulen extradited from the United States to stand trial for allegedly masterminding the failed coup against Erdogan in July 2016 is another sore point for Ankara.

There is also the fact that the United States appears determined to contain Iran and limit its influence in Syria. Many say this ensures that US forces will remain in Syria for the foreseeable future, regardless of President Donald Trump’s desire to pull out of that country as soon as possible. It also means the United States will maintains its ties with the SDF, especially east of the Euphrates. It is difficult to say, therefore, that the YPG problem between Ankara and Washington has been resolved.

As far as the Turkish side is concerned, though, it is satisfied over what it believes it has gotten out of the United States in Manbij so far. The rest, as officials on both sides indicate, will depend on developments in the field.

These may produce the results that Turkey hopes for, but then again, they may not, given the direction the Syrian crisis takes.