Ankara gets little out of Moscow regarding its plans for northern Syria. 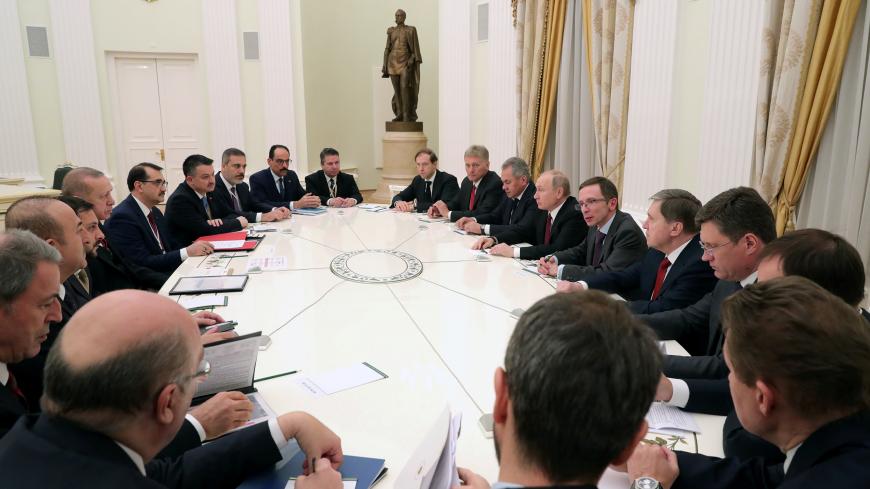 It may be too harsh to say that President Recep Tayyip Erdogan returned empty-handed from his summit in Moscow this week with President Vladimir Putin. On the plus side, there was much talk about having agreed to increase the already burgeoning economic cooperation.

Erdogan, nevertheless, appears not to have gotten much out of this summit with regard to Turkey’s expectations in Syria. He had traveled to Moscow to discuss, as his main priority, northern Syria in the wake of President Donald Trump’s decision to pull out US forces from the area.

Erdogan hoped to not only get a green light for a cross-border Turkish operation east of the Euphrates against the US-backed People's Protection Units (YPG) — which Ankara considers a terrorist organization — but to also seek support for a Turkish security zone in the region.

It was clear from the start, though, that the increasingly volatile situation in Idlib — where Turkish forces are also deployed under an agreement between Ankara, Moscow and Tehran — would be Putin’s priority.

The idea for a security zone in northern Syria is also now supported by Washington in an effort to prevent the Turkish army from launching an operation in the region. Washington wants to assuage Ankara’s security concerns regarding the YPG in this way.

Ankara and Washington remain at odds, however, over who should police the security zone if and when it is set up. Ankara says it has to be the Turkish army and its Free Syrian Army (FSA) proxies. Washington wants the US-led international coalition to undertake the task.

Ankara is still threatening to carry out this operation against the YPG, even though the United States has ratcheted up its threats against Turkey if it should do so. Trump threatened last week to “devastate Turkey’s economy” if it attacked Washington’s Kurdish allies.

The United States, however, is not the only power trying to stymie Turkey’s plans in Syria.

Ankara also faces opposition from Moscow. The Erdogan-Putin talks did not provide any indication that Moscow would support a Turkish military incursion into northern Syria.

Complicating matters further for the Turkish side is the fact that Russia is working to secure an agreement between the Kurds in northern Syria and Damascus, in order to prevent a Turkish operation.

Russian Foreign Minister Sergey Lavrov said earlier this month that these territories should be transferred to Syrian regime control after the United States departs.

During his press conference with Erdogan in Moscow earlier this week, Putin also underlined that “there was no UN resolution” or “an invitation from the Syrian government” that would enable this security zone to be set up.

“This region is currently in the hands of the Kurds," Putin said. "Damascus must talk to the representatives of the Kurds. This dialogue will not only contribute to reconciliation in Syria, but also be to the advantage of Syria’s neighbors."

This is not music to Ankara’s ears, because such remarks show that Russia accepts the YPG and its political wing, the Democratic Union Party (PYD), as representatives of the Kurds in northern Syria. The remarks also indicate that Moscow is seeking to accommodate the Kurds.

Given the weakened position of the Syrian Kurds after Trump’s decision to pull out of Syria, Russia has a good chance of succeeding in these efforts.

A small indication of this was the recent deployment of Syrian forces on the outskirts of Manbij, just west of the Euphrates River, which Turkey wants full control of after US forces leave.

Turkish Foreign Ministry spokesman Hamdi Aksoy expressed Ankara’s annoyance over this development last week. He accused the regime of “provocations in Manbij,” and called for the PYD and YPG to be prevented “from inviting the regime into Manbij.”

It was not clear who he was appealing to, though. Washington clearly does not want Turkish forces in Manbij. As for Russia, it not only expressed approval of the deployment of Syrian forces in Manbij but also sent some of its own forces there. These have even been photographed conducting joint patrols with the YPG.

Some prominent pro-government commentators have also started to acknowledge that Ankara’s problem in Syria is not just with Washington, but also with Moscow.

Hasan Basri Yalcin, from daily Sabah, for example, argued that even if Turkey and the United States are successful in coordinating their plans for northern Syria, Russia may refuse to accept them.

“There is the possibility, in such an event, of a race between Turkey and Russia in northern Syria. Turkey would do well to prepare itself for this possibility,” Yalcin wrote.

Mehmet Acet, a commentator for daily Yeni Safak, echoed this view. “If Trump’s decision to pull out of Syria is implemented, this will leave us facing the need for new negotiations and bargaining between Turkey and Russia,” he wrote.

Akdogan indicated that Turkey’s main priorities in Syria today are who will control Manbij, how the security zone will be established and who will patrol it. He went on to stress that Russia should “act under a shared sense of threat from terrorism, with regard to these developments.”

Akdogan wrote that “this will be as important as the close cooperation between Ankara and Washington over the US pullout of Syria, and the setting up of a security zone."

Despite being circumspect in his choice of language, what Akdogan is saying, in effect, is that Moscow should help Turkey gain control of Manbij, and help Turkey fight the YPG without differentiating between who is a terrorist and who isn’t.

Moscow, however, continues to refuse to list the YPG and PYD as terrorist groups. It is also making it clear — even if the pro-government Turkish media prefer mostly to look the other way — that it is not on the same page as Ankara on key issues pertaining to Syria.

Russian Foreign Minister Sergey Lavrov made it clear earlier this month that Idlib would be the main agenda item when Putin and Erdogan met.

In a separate statement, Lavrov also indicated that the Islamist Jabhat al-Nusra group had taken control of more than 70% of the province. (Al-Nusra is the original name of Hayat Tahrir al-Sham, or HTS.)

Putin and Erdogan agreed in September that Turkey was to neutralize HTS in Idlib, in return for which Russia and the regime would not attack the province.

The routing of Turkish-supported FSA forces by HTS in Idlib since then has strengthened this group’s hold over much of the province.

Erdogan promised during his press conference with Putin that Turkey would go after terrorists in Idlib without letting up. Recent statements from Russia, however, reflect impatience with Ankara in this regard.

Erdogan has no choice now but to act in Idlib now if he is to save the cease-fire he negotiated with Putin in September.

Putin’s remarks after his talks with Erdogan also showed that he had made headway in getting Ankara to re-establish contacts with Damascus. He said one of the topics they discussed in detail was the 1998 Turkish-Syrian security accord. “I am sure that this is the foundation for closing many topics,” Putin said.

He was referring to the Adana Accord reached between Turkey and Syria in 1998 to cooperate against the outlawed Kurdistan Workers Party (PKK), whose leader, Abdullah Ocalan, was residing in Damascus at the time.

Addressing military cadets a day after returning from Moscow, Erdogan said this accord had resulted in the eventual capture of Ocalan, who is currently serving a life sentence in Turkey.

“After our meeting with Putin we understand much better the need to bring the Adana Accord back on the agenda, and to concentrate on this with determination,” Erdogan said.

This is a coup for Putin. Getting Ankara to revive the Adana Accord means, in effect, that Ankara and Damascus will establish contact and start officially cooperating again. This is what Moscow has pushed for some time, and what Erdogan has resisted.