Russian President Vladimir Putin has suggested reactivating the 1998 Adana Accord to prevent Turkey from intervening east of the Euphrates River in Syria. 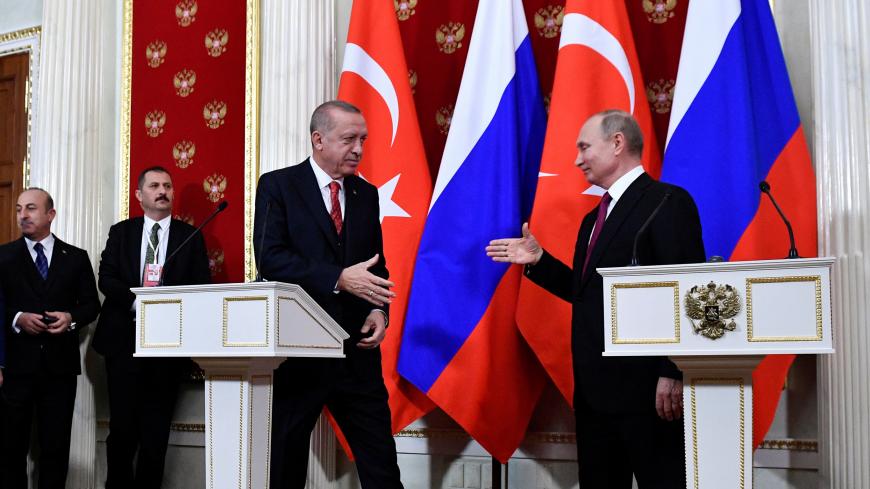 After the latest Turkey-Russia summit, the debate over a buffer zone between Syria and Turkey turned to the 1998 Adana Accord between Ankara and Damascus on cooperation against terrorism.

In their Jan. 23 meeting, Russian President Vladimir Putin reminded Turkish President Recep Tayyip Erdogan of the latter's obligations to ease tensions in northwestern Syria at Idlib, which is under the control of jihadist group Hayat Tahrir al-Sham (HTS). Putin brought up the accord and Erdogan said, “Mr. Putin, put this on the agenda. The Adana pact is an important matter. Turkey must work on it. I believe it … will make use of Turkey’s weight in the region.”

The pact was signed after Syria agreed to expel Abdullah Ocalan, leader of the Kurdistan Workers Party (PKK). The deal stipulated naming the PKK as a terror outfit, closing training camps, terminating its organizational and commercial activities, handing over captured militants, preventing PKK leaders from traveling to other countries via Syria and setting up telephone connections between the two countries. The agreement was to be renewed automatically unless one of the parties withdrew, but it fell by the wayside.

Twenty years later, a move to revive the pact will require Ankara and Damascus to work together. Turkish political opposition parties see the reference to the accord as meaning the government must speak with Damascus. Unal Cevikoz, deputy leader of Turkey's opposition Republican People’s Party, said his group is calling on Ankara to establish direct contacts with Damascus.

Turkey entered Syria in 2016, five years into the latter's civil war, to keep the Syrian Kurds from forming a united territory of Kurdish cantons along Turkey's southern border and to combat the Islamic State. Turkey has been pushing east and has its eye set on Idlib, Manbij and Kurdish-inhabited territory east of the Euphrates River.

The question now is whether Turkey has given up on buffer zone plans with the United States and agreed to the option Russia seeks. The United States proposes establishing a "safe" zone inside Syria to protect Turkey's border against armed Kurdish groups. Putin seems to hope that reactivating the Adana Accord will discourage Turkey’s goal of moving on Kurds in northeastern Syria. Moscow also wants to show that the wisest and most legitimate joint solution in northern Syria is for Turkey to work with Damascus.

The Syrian administration lost no time taking the pass from Putin to declare that it's committed to the Adana Accord, but with significant conditions. “Activating the joint cooperation agreement with Turkey can be done when the situation on the borders returns the way it used to be between the two countries and when the Turkish regime stops supporting terrorism and its forces withdraw from the Syrian territories they are occupying,” SANA news agency quoted an official source from the Syrian Foreign Ministry as saying.

Russian Foreign Minister Sergey Lavrov also weighed in on the timing of Moscow's emphasis on the Adana pact. “The problem of security on the Syrian-Turkish border arose chiefly due to the decision by the US to withdraw its units, its special forces and its military advisers from these areas,” Lavrov told Russia's state-owned news agency TASS.

“The situation definitely requires urgent steps to prevent a vacuum there. … We consider it quite possible for Turkey and Syria to use the bilateral Adana agreement of 1998,” the Russian foreign minister said. “As I understand, the Syrian government made a statement recently on its willingness to work on the basis of this agreement to provide security along the border," Lavrov added.

Responding to the developments, Erdogan only excluded high-level contacts between Ankara and Damascus. “We cannot have high-level contacts with a person who has caused the deaths of nearly a million people and displaced millions of them,” Erdogan said.

Speaking before parliament, Erdogan repeated his opinion: “Nobody has to invite us [to Syria]. We had already signed our decision in 1998 with the Adana Accord. That signature allows Turkey to enter the country in case of adverse developments.”

Although analysts speak of a "secret" clause that allows Turkey to stage operations up to five kilometers (some three miles) into Syria in case of a terror attack against Turkey, there is no such stipulation in the text of the agreement.

To give applicability to the Adana Accord, in December 2010 the two countries signed the “Joint Cooperation against Terror and Terror Organizations Agreement.” It determines that the outlawed PKK and its extensions can't use Syrian territory and bans it from setting up camps, training bases and other facilities; recruiting militants, buying weapons and financing terror-related smuggling and commercial operations. It didn't appear to grant Turkey the right to intervene.

In another distinction between the Russian and Turkish interpretations, Moscow contradicts Ankara by its tolerance of the People’s Protection Units (YPG) and Democratic Union Party (PYD). Turkey considers the PYD the PKK's Syrian offshoot. The YPG is the PYD's armed wing. Also, Damascus is disinclined to treat the YPG and PYD as terror organizations or pressure them as Turkey wishes. Within the Adana pact's framework, Ankara wants Damascus to eliminate the YPG or to allow Turkey to do so. Erdogan’s interpretation of Putin’s remarks was, “He signals that this deal could be significant in Turkey’s combat against terror.”

But contrary to Erdogan’s emphasis on continuing his fight against terror, in their joint press conference Putin said Moscow wants the Kurds to begin negotiations with Damascus.

Although it doesn’t give Turkey the right to intervene, Turkey can use the Adana Accord to thwart the PYD-YPG from gaining a legal status in the region. In an effort to eliminate Turkey’s red lines on the PKK, Moscow prefers to refer to the Kurds as a people instead of an organization.

Putin’s approach is for the Syrian army to take control of the area and to find solutions to Turkey’s security concerns within the Adana Accord. But Ankara’s objection is unrelenting: “If the regime takes control of Manbij and east of the Euphrates, it can also say that the YPG’s existence is integrated with the Syrian army.”

Pro-government Turkish media outlets couple these allegations with conspiracy theories. For example, the pro-Erdogan daily Yeni Safak reported something that sounded like it came from intelligence sources, saying the regime of Syrian President Bashar al-Assad "distributed more than 20,000 soldier and low-rank officer uniforms at Qamishli, Derbesiye, Ras al-Ain, Manbij and Hasakah." Yeni Safak claimed to have photographs of "PKK terrorists in regime uniforms.”

There's no doubt the Adana deal will provide a new foundation in deliberations. To see how it will affect developments at Manbij and east of the Euphrates, we will have to await the outcome of Turkey's negotiations with Russia and the United States.

Erdogan said, “Today both Russia and the United States say that the PYD-YPG will evacuate Manbij.” He seems to have put an end to his constant threats that Turkey might launch an operation “one night without notice.” Erdogan was very positive about Russia’s attitude, saying, “We have no problems with Russia on this issue.”

There may not be a problem, but there is also no accord. Many issues are now left to the tripartite summit that Iran, Turkey and Russia are planning for February in Moscow.