Putin guides Erdogan along the Road to Damascus

The Russian and Turkish presidents agree to rekindle 1998 Adana agreement. 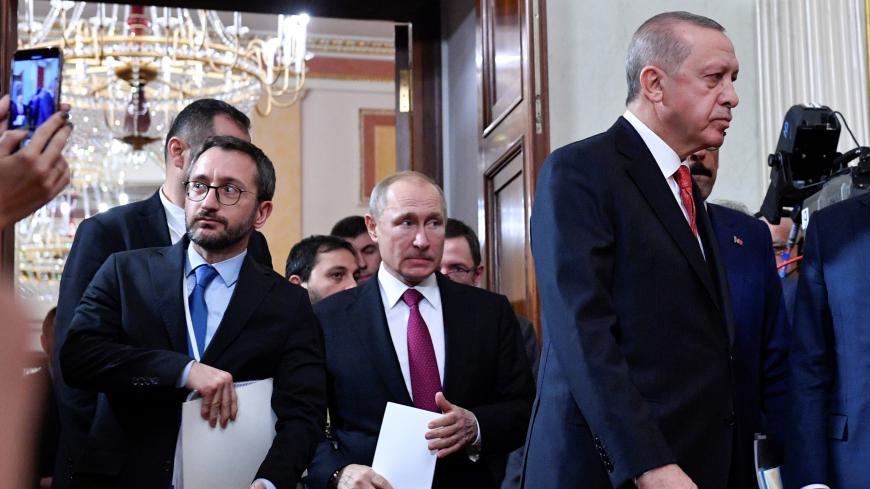 Russian President Vladimir Putin (C) and his Turkish counterpart Recep Tayyip Erdogan (R) enter a hall prior to a joint press conference following their meeting at the Kremlin in Moscow, Jan. 23, 2019. - Aleksander Nemenov/Pool via REUTERS

Last week we wrote that Turkish President Recep Tayyip Erdogan was seeking a lifeline in Syria in his meeting three days later with Russian President Vladimir Putin in Moscow.

That lifeline came in the form of the 1998 Adana agreement between Ankara and Syria, which Putin considers a path to Turkish-Syrian coordination against terrorist groups, and which Erdogan sees as an open invitation to attack the People's Protection Units (YPG) in Syria. Turkey considers the YPG a terrorist organization linked to the Kurdistan Workers Party (PKK); the United States also labels the PKK as a terrorist group.

At a joint press conference following his Jan. 23 meeting with Erdogan, Putin said, “The 1998 treaty between the Syrian Arab Republic and the Republic of Turkey is still valid, and it deals specifically with the fight against terrorism. I think this is the legal framework that covers many issues relating to ensuring Turkey’s security on its southern borders. Today we have been discussing this issue thoroughly and intensively.”

“Addressing military cadets a day after returning from Moscow,” reports Semih Idiz, “Erdogan said this accord had resulted in the eventual capture of [PKK leader Abdullah] Ocalan, who is currently serving a life sentence in Turkey. ‘After our meeting with Putin we understand much better the need to bring the Adana Accord back on the agenda, and to concentrate on this with determination,’ Erdogan said.”

Turkish Foreign Minister Mevlut Cavusoglu added that Turkey and Russia “were on the same page regarding a Syrian political settlement,” writes Maxim Suchkov, “’except for the issue of whether President Bashar al-Assad should stay in office.’ Remarkably, Cavusoglu alluded to ongoing indirect contacts between Turkey and the Syrian government, but fell short of providing details.”

“This is a coup for Putin,” writes Idiz. “Getting Ankara to revive the Adana Accord means, in effect, that Ankara and Damascus will establish contact and start officially cooperating again. This is what Moscow has pushed for some time, and what Erdogan has resisted.”

Erdogan's interpretation of Adana can also be read as a mandate for Turkish intervention against the YPG in Syria, which is opposed by both Moscow and Washington. Speaking on Jan. 25, two days after the summit with Putin, the Turkish president said, “We don’t need anyone’s invitation because we already put a signature on the issue with the Adana Agreement in 1998. This signature clears the way for Turkey to enter those areas in the event of an unfavorable incident and stipulates that members of the separatist terrorist organization be handed over to us.”

“The Erdogan-Putin talks did not provide any indication that Moscow would support a Turkish military incursion into northern Syria,” explains Idiz. “Complicating matters further for the Turkish side is the fact that Russia is working to secure an agreement between the Kurds in northern Syria and Damascus, in order to prevent a Turkish operation. Russian Foreign Minister Sergey Lavrov said earlier this month that these territories should be transferred to Syrian regime control after the United States departs. During his press conference with Erdogan in Moscow earlier this week, Putin also underlined that ‘there was no UN resolution’ or ‘an invitation from the Syrian government' that would enable this security zone to be set up.”

Suchkov adds, “Over the more than 20 years since the enactment of the agreement, Syria and Turkey have been on a twisted path in terms of its implementation with regard to PKK cross-border operations. It’s also not the first time that Putin has urged Erdogan and Assad to reactivate this agreement. Moscow has been raising this issue in talks with Ankara and Damascus since at least 2016.”

“Under the agreement,” explains Suchkov, “the Syrian party committed to five points, all of which pertain to the activities of the Kurdistan Workers Party (PKK); Turkey considers the PKK to be a terrorist group with strong links to the People's Protection Units and the Syrian Democratic Forces. Syria, on the basis of the principle of reciprocity, will not permit any activity which emanates from its territory aimed at jeopardizing the security and stability of Turkey. Syria will not allow the supply of weapons, logistic material, financial support to and propaganda activities of the PKK on its territory,’ the first principle reads. The agreement also envisages close security coordination between Damascus and Ankara on the issue, including 'a direct phone link between the high level security authorities of the two countries' and 'two special representatives each to their diplomatic missions.'”

Suchkov adds, “The concept of launching two parallel reconciliations — a political one between Damascus and the Kurds and security coordination between Ankara and Damascus — is a creative idea Moscow has brought to the table with an eye toward meeting the very interests of Turkey, Syria and the Kurds. The idea seeks to provide ultimate security for the first; grant control over the 'safe zone'/buffer zone and a prospect for maintaining state integrity for the second; and ensure safety with an eye on the political future in the form of autonomy for the third.”

As we recalled last month, “Al-Monitor has covered this trend and made this case since at least October 2016, when Mahmut Bozarslan broke the story of a meeting between the Syrian government and PYD officials mediated by Russian officials at Khmeimim air base in Syria. In August 2017, we wrote, ‘Turkey’s preoccupation with beating back Syrian Kurdish control in northern Syria could open the door to some type of accommodation with Damascus,’ and we have continued to report and assess this trend since, avoiding the fashion and pitfalls of those advocating US support for local governance in northeastern Syria on the shoulders of the SDF [Syrian Democratic Forces].”

“Perhaps the most revealing part of the press conference was when Putin spoke of European efforts to undermine the work of the Astana group,” adds Suchkov. “Prior to the meeting with Erdogan, Moscow got hold of a letter addressed to UN Secretary-General Antonio Guterres that representatives of France, the UK and Germany are said to have written. Putin, citing the letter, said the three had pressed Guterres to demand that Staffan de Mistura, before he left his post as UN Syria envoy, block decisions of the Astana group on the formation of the Constitutional Committee. ‘Frankly, we were shocked to learn this. But we’ll be patient and continue working with them,’ Putin said.”