Trump buries the hatchet with Erdogan over Syria

The US troop withdrawal could also lead to a return of the 'art of the deal' with Putin. 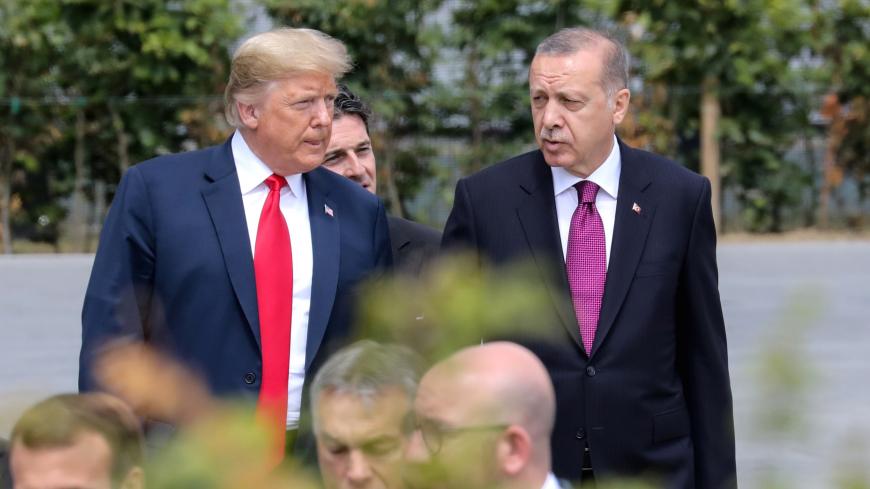 US President Donald Trump speaks with Turkish President Recep Tayyip Erdogan ahead of the opening ceremony of the NATO summit at NATO headquarters in Brussels, Belgium, July 11, 2018. - Ludovic Marin/Pool via REUTERS

In announcing the withdrawal of the roughly 2,000 American troops in Syria, the Trump administration has, in one dramatic act, sought to recast the US-Turkey relationship, which has been in freefall over US partnership with the Syrian Democratic Forces (SDF) in the fight against the Islamic State.

The SDF is mostly composed of forces from the People’s Protection Units (YPG), the gendarmerie of the Syrian Kurdish Democratic Union Party (PYD), which Turkey considers a terrorist group linked to the Kurdistan Workers Party (PKK). The United States also considers the PKK a terrorist organization.

In a phone call with President Donald Trump on Dec. 14, Turkish President Recep Tayyip Erdogan agreed both to hold off on a threatened attack on the YPG and to finish the fight against the Islamic State, also known as by its Arabic acronym DAESH, in Syria.

Erdogan said Dec. 21 that “this is certainly not an open-ended waiting process,” referring to his decision to refrain from an attack on the YPG. “In the meantime,” he added, “within the framework of the phone call with Mr. Trump, we are and will work on our operation plans aimed at neutralizing the DAESH elements that are said to continue their existence in Syria. In other words, it is a must for everyone to know that in the months ahead we are going to pursue an operation plan that will eliminate both the PKK/PYD elements and the last vestiges of DAESH in the Syrian lands.”

Erdogan linked his approach to a broader call for security and reconstruction in Syria so that the nearly 4 million Syrian refugees in Turkey can return home. The Turkish president also sang the praises of his country’s cooperation with Iran and Russia in Syria.

The Trump-Erdogan agreement provides an opening, if a fragile and uncertain one, to work out an arrangement between the PYD and the Syrian government that will be acceptable to Ankara — the only realistic endgame for stability in northeastern Syria and, ultimately, the best check on the return of the Islamic State.

Al-Monitor has covered this trend and made this case since at least October 2016, when Mahmut Bozarslan broke the story of a meeting between the Syrian government and PYD officials mediated by Russian officials at Khmeimim air base in Syria. In August 2017, we wrote, “Turkey’s preoccupation with beating back Syrian Kurdish control in northern Syria could open the door to some type of accommodation with Damascus,” and we have continued to report and assess this trend since, avoiding the fashion and pitfalls of those advocating US support for local governance in northeastern Syria on the shoulders of the SDF. As we wrote in October, “It is difficult to envision how the United States will be able to rally any type of effective regional diplomacy around Syria while supporting Kurdish-backed local forces and local structures, which seem to muddle the US commitment to Syria’s unity, also a pillar of UN Security Council Resolution 2254, and give fuel to the Astana parties. Instead, the US approach has boxed the United States into an approach that limits Washington’s ability to divide the Astana group.”

Steven Simon, a former official in both the Clinton and Obama administrations, picked up this thread and made a similar case in The New York Times on Dec. 21 when he wrote that “there is just one candidate” to secure northeastern Syria following the Trump withdrawal: “the Assad regime.”

The new US-Turkish partnership in Syria might be an opportunity to put Syria on course toward security and reconstruction. It is, so far, not a done deal. Preventing a Syrian-Turkish conflict in the east and a bloodbath in Idlib require more than a phone call, Erdogan’s promises and the abrupt end of the US military presence. There is also the matter of preventing a conflict between Israel and Hezbollah in Syria or Lebanon. Akiva Eldar provides background on the subject of Hezbollah tunnels that enter Israel, which Israeli Prime Minister Benjamin Netanyahu has asked the UN Security Council to take up as an unacceptable security risk.

The new arrangement in Syria brings us back to Russian President Vladimir Putin, who, we reported in August, has been the "man in the middle" between Erdogan and Syrian President Bashar al-Assad, and between Netanyahu and Iranian President Hassan Rouhani. In July, Al-Monitor’s Ben Caspit broke the story of how Avigdor Liberman, then Israel's defense minister, nixed a Russian deal to push Hezbollah and Iranian backed forces 100 kilometers (62 miles) back from the Israeli border. Axios this week reported on a related Russian effort this past fall. With the withdrawal of US troops from Syria, Netanyahu, whose military is seeking an "operational response to the American exit," as Caspit reports this week, may want to revisit the Russian mediation effort, which the United States should support.

In September, our take was that Trump “should trust his instincts about the prospects for the art of the deal with Putin over Syria, as was discussed in Helsinki, and the need to avoid open-ended military commitments.” There are no illusions here about the administration’s constraints on dealing with Putin given the special counsel’s investigation into whether there was coordination between Russia and the Trump campaign in 2016. Nonetheless, “There are other high stakes for US-Russian collaboration in Syria: preventing a conflict between Iran and Israel; defeating both al-Qaeda and the Islamic State; addressing the need for both a political transition that at a minimum reduces Assad’s power, or even leads to his eventual departure; planning for post-conflict stability as the war winds down; and assuring a responsible exit for American forces from an otherwise likely quagmire." As we wrote in July, after the Trump-Putin summit in Helsinki, “Putin is not someone who works for free. If he believes he is helping Trump to achieve a responsible exit from Syria, while assuring Israel’s security, this is big stuff, and the Russian president also needs a win from the art of the deal.”