What to do about 10,000 al-Qaeda-linked terrorists in Idlib? 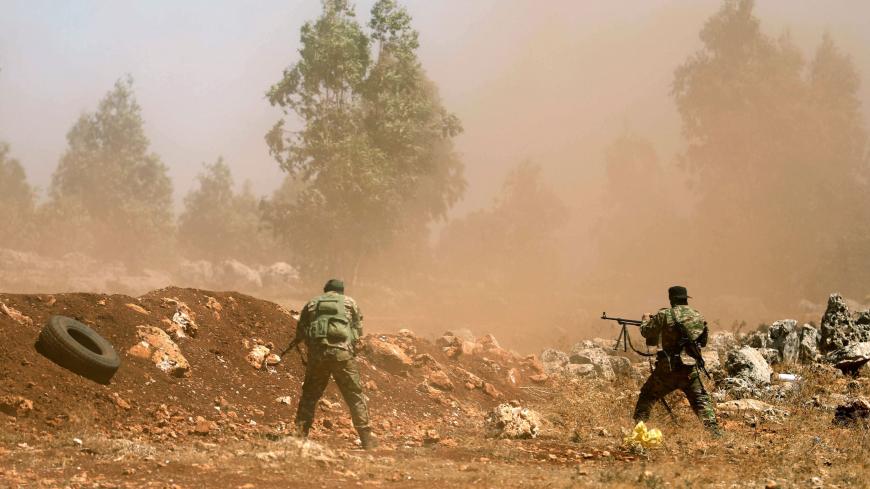 Fighters fire their rifles as they attend a mock battle in anticipation of an attack by the Syrian regime on Idlib province during a graduation of new Hayat Tahrir al-Sham members at a camp in the province's countryside, Aug. 14, 2018. - GETTY/Omar Haj Kadour

Turkish President Recep Tayyip Erdogan failed last week to get his Russian and Iranian counterparts to support his desperate bid for a cease-fire in Idlib, the stronghold of the al-Qaeda-linked terrorist group Hayat Tahrir al-Sham, as well as other radical Salafi and armed gangs based in the northwestern Syrian province.

The UN estimates that there are nearly 3 million civilians in Idlib, about half of them displaced from other parts of Syria, and that 900,000 civilians will be affected by a government assault. UN Syria envoy Staffan de Mistura said Friday, “The Security Council cannot accept that the civilians of Idlib must face this type of fate. Efforts to combat terrorism do not supersede obligations under international law in the moral conscience of humanity. We must put the sanctity of human civilian life above everything else.”

Turkey, which already hosts some 3.5 million Syrian refugees, seeks to avoid another massive inflow of Syrians displaced by conflict, but has been unable to convince non-terrorist armed groups to withdraw and distance themselves from Hayat Tahrir al-Sham.

“On paper, the leaders reiterated pledges to seek a negotiated solution to Syria’s seven-year conflict, to preserve the country’s territorial unity, to eliminate al-Qaeda-linked terrorists and to assure the safe return of millions of displaced Syrians,” reports Amberin Zaman. “But a regime attack on Idlib will likely move ahead despite Turkey’s appeals for more time to use carrot-and-stick diplomacy with the jihadis.”

That Hayat Tahrir al-Sham is digging in, rather than getting out, should come as no surprise. The UN-designated terrorist group formerly known as Jabhat al-Nusra, which controls about 60% of Idlib province, is unlikely to throw in the towel even while the international community seems to be throwing it a lifeline.

De Mistura estimates there are 10,000 Jabhat al-Nusra fighters in Idlib alone, which are embedded with tens of thousands of fighters from other armed groups, including radical Salafis such as Ahrar al-Sham, as well remnants of the US- and Turkish-backed Free Syrian Army. In comparison, a report by the Lead Inspector General of the Department of Defense estimated that approximately 14,000 Islamic State fighters remain in Syria and control 5% of Syrian territory.

Hayat Tahrir al-Sham and its jihadi brothers-in-arms do not share the international community’s concern about the consequences of an attack by the Syrian regime and its backers. The bloodier the better, in their score, as it increases pressure on Syria and Russia to end the fighting and allow the jihadis to keep their enclave. If the Syrian government uses chemical weapons, the United States has signaled that it will likely respond again with military force.

Those in Idlib who would be inclined to take up the Turkish offer to prevent the slaughter don’t stand a chance. The Washington Post reported that Hayat Tahrir al-Sham and its Salafi partners have erected gallows around Idlib province for public execution of traitors — that is, those who want to negotiate an exit, as well as opponents of their brutal style of Islamic law. “Several groups monitoring the situation confirmed the existence of detention facilities across a network of basements and caves,” the Post reports. The paper said the group JAN Violations, which records allegations of Hayat Tahrir al-Sham abuses, reported that the "group had at least five prisons in the province, several of them notorious for torture.” JAN stands for Jabhat al-Nusra.

The atrocities committed by al-Qaeda-linked terrorists and other jihadi groups in Idlib has been well covered by Al-Monitor, which was one of the few media outlets to highlight the 2016 Amnesty International publication "Torture was my punishment: Abductions, torture and summary killings under armed groups in Aleppo and Idleb, Syria." Conditions for civilians under the rule of these terrorists and armed gangs has only gotten worse the past two years.

US officials understand the bind they are in, as the goal is obviously not to give such a high concentration of terrorists a reprieve or exit ramp. US Secretary of State Mike Pompeo said Tuesday, “The Russians have the narrative that there are terrorists in Idlib. That is a true statement. We share their concern about terrorism emanating from northern, northwest Syria. We absolutely agree with them there are terrorists in those locations and they need to be taken care of such that they don’t export terror around the world. … It is not the way to do that to put the lives of all these innocent civilians at risk and create a humanitarian crisis." He said that what Trump said Monday night "was we’re happy to work on the terrorism issue in this place, you made an agreement to handle this in a way that is different from what it appears you’re thinking, please take that seriously.”

The showdown in Idlib comes as the Trump administration has reportedly embarked on a “new strategy” to keep 2,200 US troops in Syria “indefinitely” both to keep up the fight against the Islamic State and to maintain pressure on Iran to exit Syria, according to the Washington Post. In addition to the troop presence, the United States will launch a “major diplomatic initiative,” including more sanctions on Russia and Iran. James Jeffrey, the US representative for Syria engagement, told the Post, “I am confident the president is on board” with this more active approach to Syria policy.

Our take is that the president should trust his instincts about the prospects for the art of the deal with Putin over Syria, as was discussed in Helsinki, and the need to avoid open-ended military commitments. Trump said Thursday, “One of my best meetings was with President Putin of Russia.” Trump, and all who deal with Russia and the Middle East, understand there are no perfect outcomes. While rightly keeping the pressure on Moscow to avoid unnecessary civilian casualties in Idlib, there are other high stakes for US-Russian collaboration in Syria: preventing a conflict between Iran and Israel; defeating both al-Qaeda and the Islamic State; addressing the need for both a political transition that at a minimum reduces Assad’s power, or even leads to his eventual departure; planning for post-conflict stability as the war winds down; and assuring a responsible exit for American forces from an otherwise likely quagmire.

We wrote here last month, “Putin is not someone who works for free. If he believes he is helping Trump to achieve a responsible exit from Syria, while assuring Israel’s security, this is big stuff, and the Russian president also needs a win from the art of the deal. For Putin, that means relief from at least some of the US sanctions on Russia.”

Trump’s speech following the US missile attacks on Syria in April seems to us closer to the mark than the more activist approach reported during the past week: The approach he outlined in the spring was to hold Syria, Russia and Iran accountable, especially for the use of chemical weapons, while keeping in mind the many lessons learned about seemingly endless American military commitments in the Middle East.

“America does not seek an indefinite presence in Syria, under no circumstances,” Trump said April 13. “As other nations step up their contributions, we look forward to the day when we can bring our warriors home. ... Looking around our very troubled world, Americans have no illusions. We cannot purge the world of evil or act everywhere where there is tyranny. No amount of American blood or treasure can produce lasting peace and security in the Middle East. It’s a troubled place. We will try to make it better, but it's a troubled place.”