Putin, Erdogan agree on Idlib but maneuver on Kurds

While Moscow and Ankara agreed to reinforce cooperation on Idlib to fight Hayat Tahrir al-Sham, Putin's proposal on the "buffer zone" in Syria's northeast sent Erdogan home thinking, at least until the next round of Astana talks 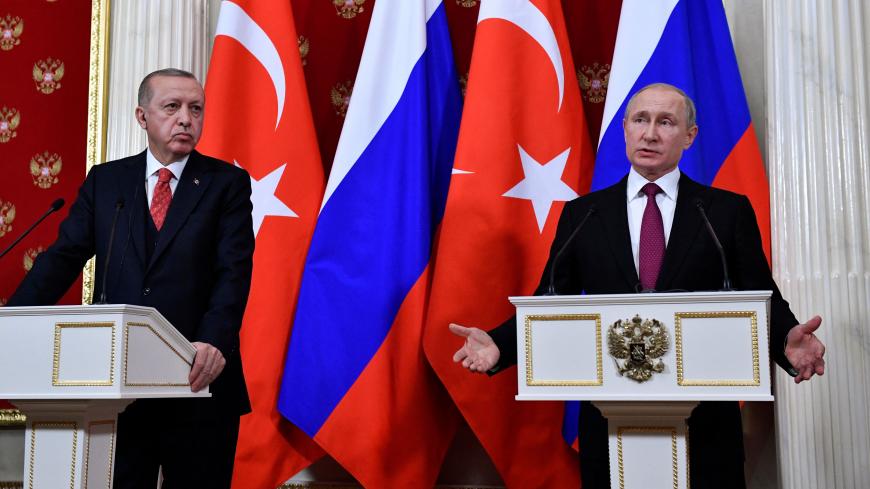 MOSCOW — While the much anticipated encounter between the presidents of Russia and Turkey in Moscow on Jan. 23 did not provide answers to all of the imminent questions the two are faced with in Syria, it did provide important clues as to where the respective bilateral disagreements were and how the two may proceed to address them.

“In the first 10 months of 2018, bilateral trade grew more than in the entire previous year. The number of Russian tourists visiting Turkey last year rose by 30% to an all-time high of 6 million. Mr. President, my dear friend, the credit for this largely goes to you personally. It is your personal achievement, because you devote significant attention to this matter,” Putin said, demonstrating what he has mastered over recent years in his multiple contacts with Middle Eastern leaders — the art of flattery.

“Undoubtedly, the fact that our relations are expanding is having a ripple effect on regional security. No doubt, our solidarity is making a significant contribution to regional security,” Erdogan responded.

The two then departed for a one-on-one conversation with members of delegations joining the leaders later on for an overall encounter of three hours.

Putin praised the productivity of his talks with Erdogan as well as other summits within the Astana format with Iranian President Hassan Rouhani on the formation of the Constitutional Committee for Syria.

"The Astana format currently remains the most effective mechanism of settling the conflict in Syria. … Our meetings are always comprehensive and fruitful, without any exaggeration. This provides good results in terms of practical work. In particular, Russian-Turkish-Iranian summits in the framework of the Astana process are very helpful as they focused on settlement in Syria. We agreed to organize another summit like this in Russia soon. Together with Mr. President, we have already agreed on the place and tentative date. We will also need to coordinate it with our Iranian partners," Putin said.

Perhaps the most revealing part of the press conference was when Putin spoke of European efforts to undermine the work of the Astana group. Prior to the meeting with Erdogan, Moscow got hold of a letter addressed to UN Secretary-General Antonio Guterres that representatives of France, the UK and Germany are said to have written. Putin, citing the letter, said the three had pressed Guterres to demand that Staffan de Mistura, before he left his post as UN Syria envoy, block decisions of the Astana group on the formation of the Constitutional Committee.

"Frankly, we were shocked to learn this. But we’ll be patient and continue working with them," Putin said.

What probably can be called another deliverable was the agreement to continue a “joint anti-terrorism fight” in Idlib. Both recognize that the “de-escalation zone” there has been deteriorating into a Hayat Tahrir al-Sham-controlled gray zone. The idea now is to task the militaries of the two countries to continue the talks on specific actions and measures to be taken in Idlib. It is likely that the details of the plan will be finalized at the coming Astana trio gathering in Moscow.

“Turkey is doing a lot to try to remedy the situation, but more [bilateral] action is required to liquidate the actions of terrorist groups,” Erdogan said.

The process has been complicated because of the Kurdish-controlled areas and the Turkish-sponsored idea of a “safe zone.”

Last week Moscow stated its concerns about the zone.

"We are convinced that the best and only solution is the transfer of these territories to the control of the Syrian government, and of Syrian security forces and administrative structures," Russian Foreign Minister Sergey Lavrov said Jan. 16.

Following the talks with Putin, Erdogan told a joint press conference that Moscow and Ankara don’t have any disagreements about the safe zone in northern Syria.

Putin, however, said Russia supports a dialogue between Damascus and representatives of the Kurds.

"This dialogue will contribute to consolidation of the Syrian society and national reconciliation, will be useful not only for Syria, but for all neighboring states as well," he stressed.

The Russian president also spoke about the possibilities of what might happen “in the context of the declared US pullout from Syria.”

“In case those plans are really implemented, it will become a positive step and will help stabilize the situation in that troubled area of the Syrian state which is currently controlled by Kurdish units," Putin said. Until then, the Russian and Turkish militaries will discuss prospects for creation of a “buffer zone” on the Turkish-Syrian border.

Erdogan, in turn, stressed “the crucial importance” that the planned US withdrawal from Syria not leave room “for terrorist groups to roam freely.”

The day after the presidential meeting in Moscow, Turkish Foreign Minister Mevlut Cavusoglu said Turkey has the capacity to create a “safe zone” in Syria on its own but will not exclude the United States, Russia or others “if they want to cooperate.”

He said that nothing was yet certain about the establishment of the zone, but that Ankara and Washington’s views were “in line aside from a couple of points.” He said the parties had started discussing the composition of the administration of Syria’s Manbij, a town currently controlled by Kurdish militia.

Similarly, Cavusoglu argued Ankara and Moscow were on the same page regarding a Syrian political settlement “except for the issue of whether President Bashar al-Assad should stay in office.” Remarkably, Cavusoglu alluded to ongoing indirect contacts between Turkey and the Syrian government, but fell short of providing details.

The remarks are important in light of Putin’s mention at the press conference of the Adana agreement between Turkey and Syria. Putin argued the agreement, signed between the two countries in October 1998, was still in effect and was meant to guarantee Turkey’s border security. Under the agreement, the Syrian party committed to five points, all of which pertain to the activities of the Kurdistan Workers Party (PKK); Turkey considers the PKK to be a terrorist group with strong links to the People's Protection Units and the Syrian Democratic Forces.

“Syria, on the basis of the principle of reciprocity, will not permit any activity which emanates from its territory aimed at jeopardizing the security and stability of Turkey. Syria will not allow the supply of weapons, logistic material, financial support to and propaganda activities of the PKK on its territory,” the first principle reads.

The agreement also envisages close security coordination between Damascus and Ankara on the issue, including “a direct phone link between the high level security authorities of the two countries” and “two special representatives each to their diplomatic missions.”

Over the more than 20 years since the enactment of the agreement, Syria and Turkey have been on a twisted path in terms of its implementation with regard to PKK cross-border operations. It’s also not the first time that Putin has urged Erdogan and Assad to reactivate this agreement. Moscow has been raising this issue in talks with Ankara and Damascus since at least 2016.

As Al-Monitor colleague Ruslan Mamedov points out, Putin knows the details of the issue. Back in 1998, when PKK leader Abdullah Ocalan was forced out of Syria and moved to Moscow, Russia’s Federal Security Agency (FSB) asked him to leave the country as a result of an alleged deal between Moscow and Ankara involving Chechen radicals. Putin took over as the head of the FSB in July 1998, a few months before the events, and even then was most likely well-informed of the complexity of the issue.

The concept of launching two parallel reconciliations — a political one between Damascus and the Kurds and security coordination between Ankara and Damascus — is a creative idea Moscow has brought to the table with an eye toward meeting the very interests of Turkey, Syria and the Kurds. The idea seeks to provide ultimate security for the first; grant control over the “safe zone”/buffer zone and a prospect for maintaining state integrity for the second; and ensure safety with an eye on the political future in the form of autonomy for the third. Implementing the plan will likely prove far more difficult than mastering the art of flattery. But in the absence of a better alternative to a scenario involving the use of force, this could well worthy of thought during the run-up to the next Astana meeting.