Russia, Iran and Turkey continue to negotiate a settlement to the Syrian war that works to their advantage. 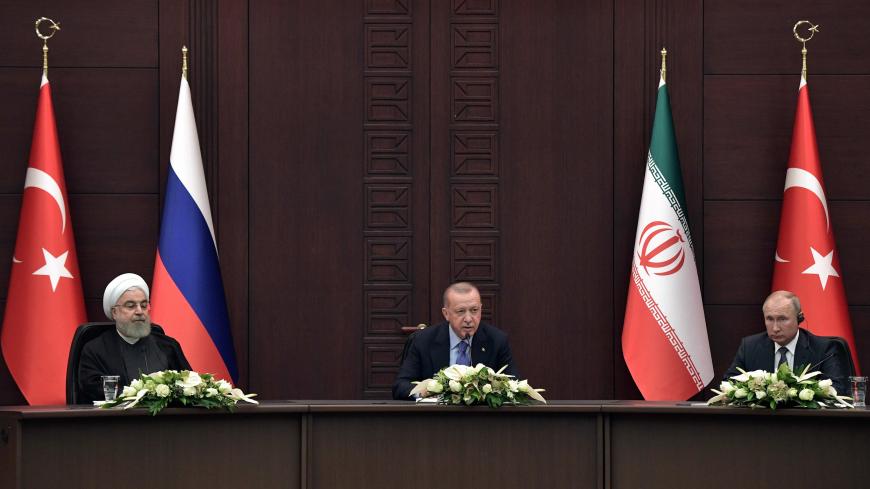 The presidents of Iran, Russia and Turkey met in Ankara Sept. 16 for a new round of Syria talks within the framework of the Astana peace process.

The fifth summit of the three guarantors of the Syrian cease-fire came amid Ankara’s growing concerns over the Syrian army’s military campaign in Idlib, which Moscow supports. Meanwhile, Vladimir Putin, Hassan Rouhani and Recep Tayyip Erdogan were expected to announce progress on the formation of the long-awaited Syrian Constitutional Committee, which will be tasked with drafting a new constitution. As such, the summit was expected to be dominated by Idlib and the Constitutional Committee.

Those issues were indeed raised at the meeting, with the three leaders emphasizing the need for a political solution to end the ongoing conflict and to continue fighting terrorist groups in Syria. They also announced the imminent launch of the Constitutional Committee, though provided no exact date.

However, by looking at the positions expressed by each of the three presidents, it can be said that they have different priorities regarding the most urgent issues in Syria. For Putin and Erdogan, the situation in Idlib is of the utmost importance. “We need to take additional measures to completely eliminate the security threats coming from the Idlib de-escalation zone,” Putin said, suggesting that Moscow will continue to support the Syrian government’s military campaign in Idlib. Erdogan reiterated Ankara’s concerns over the situation in the northwestern Syrian province, saying that “Turkey cannot remain silent in the face of a new tragedy at the country’s border that will affect 4 million people.”

Rouhani, however, appeared to see the summit in Ankara as an opportunity to express Iran’s concerns over American and Israeli moves in Syria. “The illegal presence of American military forces on Syrian soil threatens the territorial integrity and national sovereignty of Syria,” Rouhani said, emphasizing that “it is necessary for American forces to leave this region as soon as possible.” He touched upon the continuous Israeli attacks in Syria, saying that “such attacks are blatant examples of provocative and illegal hostile measures.” The Iranian president went on to criticize international organizations for failing to properly react to the Israeli aggressions.

As tensions between Tehran and Washington rise, and with Israeli Prime Minister Benjamin Netanyahu insisting that “Iran has no immunity, anywhere,” Rouhani’s main goal at the latest summit was to gain Russian and Turkish support in face of the current threats. Indeed, he was successful in this regard. The joint statement issued after the summit not only called the Israeli strikes in Syria “destabilizing and in violation of the country's sovereignty and territorial integrity,” but also rejected the Israeli occupation of Syria’s Golan. One section of the statement, which rejects “all attempts to create new realities on the ground under the pretext of combating terrorism,” could be interpreted as a jab at the United States, as Tehran believes that Washington seeks to erode Syria's territorial integrity.

Rouhani also elaborated Iran's position on Idlib. Despite expressing support for the September 2018 Sochi deal between Moscow and Ankara on stabilizing the situation in Idlib, Rouhani mentioned that the deal was not implemented as expected. “This situation proves that the terrorists must never be given an opportunity to misuse the conditions on the ground,” he concluded. This position was interesting since, for about five months, Tehran was silent on Idlib, primarily to not provoke Turkey. Now Iran seems to be in line with Russia in its support of the Syrian government’s military moves in Idlib.

However, such a shift in tone cannot be interpreted as an emerging gap between Tehran and Ankara. Instead, it might indicate a possible compromise between Iran and Russia on the one hand and Turkey on the other regarding developments in Syria. The compromise could entail gradually bringing Idlib under the control of the Syrian government and, in return, supporting Ankara’s “peace corridor” along the Turkish-Syria border. According to Erdogan, the corridor would alleviate Turkey’s concerns over the “terrorist threat” coming from the Syrian territory while providing a ground for the return of the Syrian refugees.

Such an initiative could be acceptable to Russia and Iran if it were defined within the Astana format and provisioned joint control of the corridor by the three Astana partners. This would be seen as an alternative to the Turkish-American “safe zone” in Syria’s north and northeast, thereby effectively distancing Turkey from the United States in Syria. Ankara’s persistent dissatisfaction over Washington’s failure to live up to its commitments under the safe zone agreement could pave the way for such a scenario.

Nonetheless, for Iran, any provision within the framework of a peace corridor would be temporary. It would need to be complemented by direct Syria-Turkey talks and their eventual cooperation in securing their shared borders. This is why Rouhani once again referred to the 1998 Adana agreement between Damascus and Ankara as a “good model for resolving both sides’ concerns and starting the end of a bitter era.”

Rouhani also said Syria's reconstruction and the return of refugees were important issues. Iran has recently paid more attention to these issues, mainly with the aim of presenting the war in Syria as over, with the Bashar al-Assad government having preserved its rule. As such, various international actors should now focus on the post-war social and economic processes in Syria, which would entail recognizing Assad’s legitimacy. This way, Iran could make sure that the position of its Syrian ally would be guaranteed for the foreseeable future.