Iran moves to facilitate Turkey-Syria understanding ahead of Astana summit

The Iranian foreign minister’s recent trips to Damascus and Ankara suggest that Tehran is stepping up its efforts to facilitate and accelerate the political process to end the Syrian crisis. 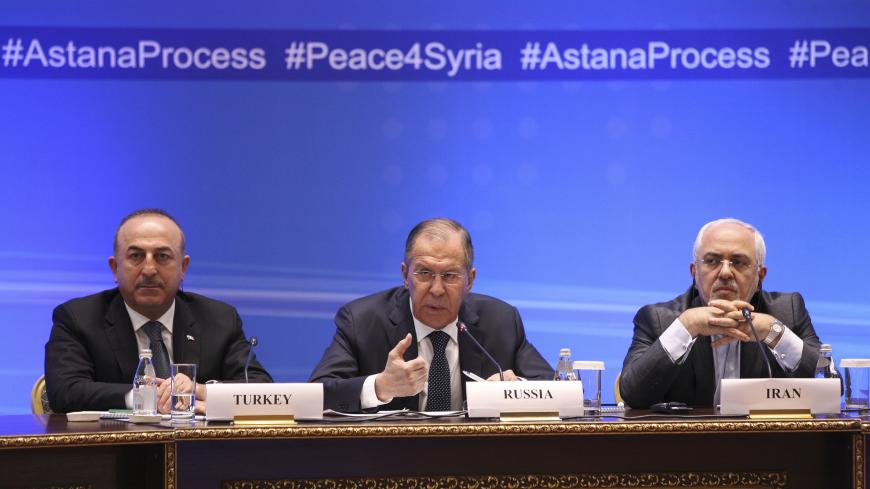 Iranian Foreign Minister Mohammad Javad Zarif paid an official visit to Turkey on April 17, following his visit to Syria the previous day. Although bilateral issues were a part of the agenda of Zarif’s meetings in both countries, the timing of the trip and the content of his talks in Damascus and Ankara indicated that his diplomatic tour was, more than anything else, related to the international efforts to solve the Syrian crisis.

Zarif’s regional trips come less than 10 days before a new round of Syria peace talks within the framework of the Astana track in which Iran, Turkey and Russia play the leading role. As such, Zarif’s visits to Syria and Turkey have given rise to speculation that the Islamic Republic might be trying to find common ground between the two sides and provide the framework for a breakthrough in the upcoming diplomatic talks. Furthermore, the necessity of finding a peaceful solution to the Syrian conflict was the main mantra repeated by Zarif during all of his meetings in Damascus and Ankara.

A deeper look at Zarif’s remarks during his trips indicates that Tehran’s plan to facilitate and accelerate the Syrian political process has three main pillars.

First and foremost, Iran appears to be dedicating unprecedented efforts to bring about the formation of the “Syrian constitutional committee.” The committee is due to be tasked with drafting a new constitution for Syria. Iran’s principal position since the beginning of the crisis has been that the future of Syria — including its constitution — should be only decided by the Syrian people, denying foreign initiatives for this purpose. However, since mid-2018, this position started to change as a result of the evolving equations in the war-torn country, and the Islamic Republic is now fully supporting the formation of the constitutional committee.

Zarid said, “I had a very good conversation with [Syrian] Foreign Minister Walid al-Muallem on how to proceed with the political process within the framework of the Astana track and the constitutional committee.” Zarif added, “We need to cooperate with our Russian and Turkish counterparts in this regard.” At a joint press conference with his Turkish counterpart Mevlut Cavusoglu, Iran's top diplomat once again touched upon this issue. Noting that Iran has conducted positive talks with Turkey and Russia on the issue of the constitutional committee, Zarif said, “We hope two issues important for the start of the constitutional committee are resolved soon; one is the general composition of the committee and the other is the main principles governing the work of the committee.” He went on to say that he would brief Turkish President Recep Tayyip Erdogan on the content of his talks with Syrian President Bashar al-Assad.

As such, it seems that Zarif’s visits to Damascus and Ankara were really aimed at conveying messages between the two sides regarding their expectations of the political transition process in Syria. Having said this, the Iranian Foreign Ministry spokesman dismissed talk that Zarif conveyed a message from Assad to Erdogan.

The importance of such a task becomes more evident when we consider that one of the main hurdles blocking the formation of the Syrian constitutional committee has been the Assad government's objection to the inclusion of certain names on the committee. However, at the same time that Zarif was in Damascus, it was announced that Geir Pedersen, the UN special envoy for Syria, had convinced Assad to accept the proposed names and that the list of the committee members would be finalized in the next Astana meeting April 25-26.

It would be safe to argue that Tehran’s new approach in support of the formation of the constitutional committee has contributed to softening Assad’s position. Indeed, this would be viewed as a positive step by Turkey, which has been strongly arguing in favor of a more serious presence of the Syrian opposition in the constitutional committee. But what might have Tehran and Damascus asked Ankara in return?

This brings up the second and third pillars of Iran’s plan, that is, returning Idlib to the control of the Syrian government and preventing a Turkish military operation east of the Euphrates. Indeed, Zarif told reporters in Damascus that he had “serious concerns” about the situation in Idlib, saying, “We [Iran], Turkey and Russia are definitely obliged to implement the commitments made on Idlib, one of the most important of which is to disarm the terrorist groups and expel them from Idlib.” This was, in fact, a clear reference to Ankara’s commitments under a deal with Moscow in September 2018 to oversee the disarmament of terrorist groups and the establishment of a “deconfliction zone” in Idlib. The deal was later endorsed by Iran, with the final aim of both Tehran and Moscow being the gradual return of the region to Syrian government control. However, Russia has on occasion criticized Turkey for not living up to its commitments.

As for the issue of the region east of the Euphrates, Iran wants to reestablish the rule of the Syrian government over the area, while trying to address Turkey’s concerns over the presence and activities of the armed Kurdish groups. “We are fully aware of the concerns of our friends in Turkey regarding the threats [east of the Euphrates],” Zarif said in Ankara, adding, “The best way to preserve the security of all countries of the region is to deploy the Syrian army along the border with Turkey and to ensure that no terrorist activity will be conducted against the Turkish government and nation from the Syrian side.” Turkey considers the US-backed People’s Protection Units, which control vast areas in eastern Syria, a terrorist group. Turkish officials have warned that they would resort to a new military operation inside Syrian territory to eradicate the threat posed by the Kurdish group.

As such, Iran is apparently trying to kill two birds with one stone, preventing Turkey from expanding the area under its control in Syria as a result of a new military operation, while minimizing American influence by helping the Assad government reestablish its rule over Syria’s eastern and northeastern regions.

For now, we have to wait until the upcoming Astana meeting to see whether Iran has been able to bring Turkey on board for implementing Tehran's vision for the political process in Syria. If so, we can expect important military and political developments in the war-torn country in the near future.