How US sanctions facilitate Turkish-Iranian understanding on Syria

Faced with US pressures on multiple fronts, Iran and Turkey are likely to step up cooperation — including in Syria, where the two neighbors remain at odds over multiple issues. 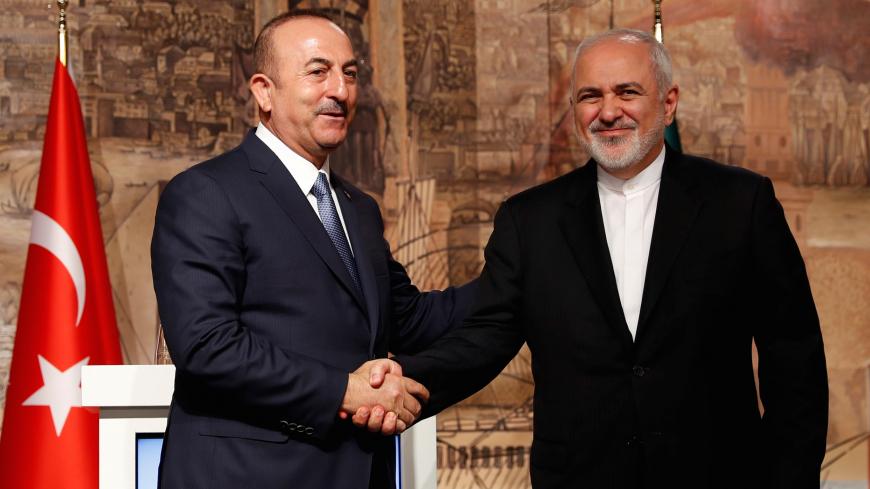 US President Donald Trump’s recent decision not to extend the sanctions waivers for the purchase of Iranian oil has been met with widespread reaction around the world. One of the main negative responses to the new American move has come from Turkey, Washington’s NATO ally, which has been one of the remaining customers of Iranian oil and natural gas.

Criticizing the Trump administration’s new restrictive measure against Tehran, Turkish Foreign Minister Mevlut Cavusoglu said, “We do not accept unilateral sanctions and impositions on how we build our relationship with our neighbors.” Turkish Minister of Transport and Infrastructure Mehmet Cahit Turhan said following a visit to Tehran on April 29 that the American sanctions cannot alter Turkish-Iranian relations.

Although Washington has decided to pursue its policy of “maximum pressure” on Iran in an all-out way, Ankara and Tehran appear determined to preserve their cooperation. There have been reports suggesting that the two sides are working on mechanisms to avert the negative impacts of the US sanctions and to continue engaging in trade. The frequency of high-level meetings between Iranian and Turkish officials can be considered as another sign of this. Iranian Foreign Minister Mohammad Javad Zarif visited Ankara on April 17 en route to Syria, and his deputy Abbas Araghchi traveled to the Turkish capital April 30 for “political consultations” with Turkish officials.

As such, Iran sees Turkey as an important partner in this period of increasing US pressure. This comes against the backdrop of Ankara’s own problems with Washington over issues such as Turkey’s determination to by the S-400 missile defense system from Russia and US support for Kurdish groups in Syria. Meanwhile, despite having starkly different viewpoints on the Syrian crisis, Tehran and Ankara are continuing their cooperation on the issue within the framework of the Astana peace process. Thus, an important issue to consider is whether and how the new thaw in relations between the two neighbors could affect their interactions in Syria.

It seems that a change of tone from Iranian officials regarding the situation in Syria’s northwestern province of Idlib has been one of the main impacts of the abovementioned trend. Ankara has been resisting the desire of its two Astana partners — Iran and Russia — to resort to an extensive military operation in Idlib to eradicate the terrorist groups there, arguing this would lead to a new wave of Syrian refugees flowing into Turkey, threatening its national security.

Although Iran is sticking to its viewpoint that all Syrian territory has to return to the control of the Syrian government, it is avoiding direct pressure on Ankara on this issue. During his latest visit to Ankara, Zarif didn’t go further than expressing serious concerns about the situation in the area, while emphasizing that all the Astana partners are definitely obliged to implement the commitments made on Idlib. On the other hand, while Syrian and Russian forces have recently increased sporadic attacks against the rebel and terrorist groups in Idlib, no presence of Iranian or Iran-backed groups has been reported in the area.

Mostafa Najafi, a Tehran-based foreign policy analyst who co-authored a book on the Syrian crisis, said the issues of Idlib and US sanctions are interconnected. “Turkey will probably support Iran in the face of the sanctions and Tehran will decrease its pressures on Turkey over the Idlib issue,” Najafi told Al-Monitor.

Therefore, the most probable scenario for Idlib would be a lengthy process of sporadic Russian-Syrian strikes and the continuation of Russian-Turkish diplomatic interactions on the issue, with no Iranian or Iran-backed forces involved on the ground.

The situation in the region east of the Euphrates River is another issue to be possibly affected by closer Tehran-Ankara ties. Although Iran is still rejecting Ankara's desire to initiate a military campaign in the area against the armed Kurdish groups, the level of cooperation between the two sides is expected to be enhanced. At the same time as Turkey has been in talks with the United States — the main supporter of the Syrian Kurdish groups — to push the Kurds away from Turkey's borders and create a “safe zone” in the area, Iran has been trying to convince the Kurds to reach a compromise with Damascus. However, none of these efforts have yet been successful.

Meanwhile, Iran’s latest proposal, raised during Zarif’s visit to Ankara, was to deploy the Syrian army along the border with Turkey, while providing Ankara with security guarantees that “no terrorist activity will be conducted” against Turkey from inside the Syrian territories. In this vein, Iran will most probably increase its efforts to bring Ankara and Damascus to a compromise. In the best-case scenario, Iran may try to establish a kind of joint Syrian-Turkish control over the borders, without any further Turkish advances inside Syria.

However, Turkey may be looking for something more than a simple security guarantee from Iran to abandon its military plans in the east of the Euphrates. Vali Golmohammadi, an assistant professor of international relations at Tarbiat Modares University in Tehran who specializes in Turkish foreign policy, believes that Ankara expects Tehran to convince Syrian President Bashar al-Assad not to give the Kurds any meaningful political weight in the future of Syria. “Ankara wants to limit, as much as possible, the role of the Kurds in devising a new constitution for Syria, as well as their place in the future political system of the country,” Golmohammadi told Al-Monitor.

It could be said that the American sanctions against Iran and the Syrian issue are the two main elements defining the current stage of Iranian-Turkish relations. Ankara’s potential to help Iran alleviate the negative impacts of the sanctions is its main leverage on Tehran to gain concessions in Syria. On the other hand, Iran’s influence on Assad, as well as its potential military role in Idlib, are the Islamic Republic’s levers on Turkey. All this is expected to result in more mutual understanding between Tehran and Ankara in Syria.