Why Iran has been quiet when it comes to Syria's Idlib, safe zone

Iran has been careful not to antagonize Turkey while also opposing US-Turkish agreements on Syria. 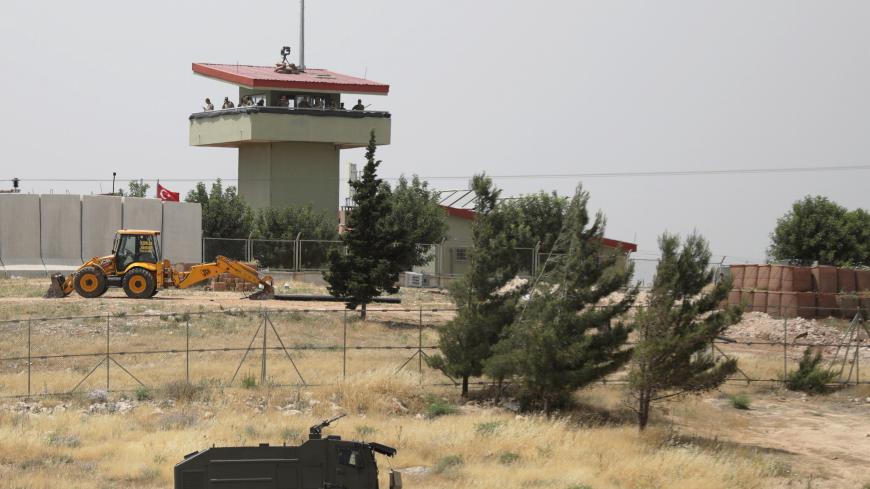 Turkish soldiers stand on a watch tower at the Atmeh crossing on the Syrian-Turkish border, as seen from the Syrian side, in Idlib governorate, Syria, May 31, 2019. - REUTERS/Khalil Ashawi

More than eight years after the start of the civil war in Syria, the fate of the country is expected to be decided as a result of developments in two strategic regions, namely Idlib and the area east of the Euphrates River.

On Aug. 19, it was announced that the Syrian army had forced the rebels to withdraw from the strategic city of Khan Sheikhoun in southern Idlib. Russian President Vladimir Putin publicly endorsed the military operation in the area, saying Moscow supports the Syrian army’s efforts to “neutralize the terrorist threats” in Idlib.

The Syrian government’s other major ally, Iran, however, has been quite silent regarding the developments in Syria’s northwest. In fact, the last time a high-ranking Iranian official took a position on Idlib was April 16, when Iranian Foreign Minister Mohammad Javad Zarif said Tehran has “serious concerns” over the situation in Idlib. Also, since the beginning of the Idlib operation in April, no major presence of Iranian or pro-Iran forces has been reported in the area.

As for the situation in the east of the Euphrates, after months of controversy between Turkey and the United States over the establishment of a “safe zone” along Syria’s northern borders with Turkey, the two sides reached an agreement Aug. 7 to set up an operations center as a first step toward establishing Ankara’s desired buffer area. The agreement came after the Turkish government’s repeated warnings that it would act unilaterally to address its security concerns in Syria should Washington fail to offer an acceptable joint solution.

Despite its established position of rejecting any foreign intervention in Syria’s north and northeast, Iran did not immediately react to the Turkish-American agreement. Tehran’s first official reaction to this development did not come until Aug. 18, when Foreign Ministry spokesman Abbas Mousavi called the American plans in northeastern Syria “provocative and worrisome.” Mousavi went on to say that the security issues in that part of Syria should be addressed through cooperation between neighbors, saying, “There is no need for interference by foreign powers.” Interestingly, all the blame was directed at Washington, with not even a single mention of the role of Ankara in the recent developments.

This latter issue can partly explain why Iran has decided to take a low profile on the two most important current issues in Syria. In the cases of both Idlib and Syria's northeast, Iran has been cautious not to alienate Turkey by acting against Turkish interests or by directly condemning Ankara's moves. In fact, while emphasizing that all of Syrian territory must be brought back under the Bashar al-Assad government’s control, Iran has also tried to appease Turkey by calling Ankara’s security concerns along its borders with Syria “legitimate.”

The main reason for this is that Tehran counts on Ankara as a reliable partner in combating the negative effects of Washington’s “maximum pressure” policy. Despite the US sanctions, Iran and Turkey have been working on developing bilateral economic relations, intending to enhance the volume of annual trade from $10 billion to $30 billion.

It seems that the direct link between supporting Iran in the face of the sanctions and gaining Iran’s support in Syria is clear for the Turkish officials as well. While lauding cooperation with Iran and Russia within the framework of the Astana format, Turkish Foreign Minister Mevlut Cavusoglu said in a speech Aug. 5 that the US sanctions against Iran harm the whole region.

Apart from considerations regarding its ties with Turkey, another reason for Tehran’s silent stance toward the recent developments in Syria is that Iran has been in a process of shifting its focus toward the political aspects of the Syrian crisis. Iran is trying to help Assad establish his position as the legitimate ruler of Syria, both internally and externally.

This new tendency was evident during the latest round of Astana talks in the Kazakh capital of Nur-Sultan on Aug. 1-2. The main focus of Iran’s top representative to the talks, Ali Asghar Khaji, in meetings with his counterparts from the other Astana partners and the Syrian government was on two issues: accelerating the formation of Syria’s constitutional committee and the return of Syrian refugees.

Although talking about the humanitarian aspects of the Syrian crisis is nothing new in Iran’s approach toward the issue, it was the first time that the specific issue of refugees found a top spot on the Islamic Republic’s Syria agenda. It seems that the concurrent emphasis on the constitutional committee and the refugees was done in order to depict Syria as moving away from the war period.

Iran could then build upon such an argument not only to preserve its influence in Syria but also to push for the end of the American presence in the Arab country. If Iran succeeds in getting the other actors to accept Assad’s legitimacy, the issue of the Turkish military presence in Syria would be solvable as well, as Tehran would have enough leverage to promote direct talks between Ankara and Damascus on the situation in Syria’s north and northeast. Although it seems to be a long-term process, Iran is apparently of the belief that there could be a diplomatic solution to the issue of the Turkish presence in Syria.

Finally, Iran’s low-profile approach on the two mentioned issues does not mean that it has given up on attempting to preserve its other interests in Syria. In fact, while Idlib and the east of Syria have been at the forefront of world attention, Iran has been trying to cement its position in Syria by reaching a new set of economic agreements with the Assad government. The Iran Chamber of Commerce recently established an office in Damascus and Tehran is trying to persuade the Syrian government to remove taxes on Iranian goods. Tehran is also trying to accelerate the process of reopening the Abu Kamal-Qaim crossing along the Syrian-Iraqi border, which would provide Iran with land access to Syria via Iraq.

As such, what we are now witnessing regarding Iran’s role in Syria could be considered as just a change of tactics, not the strategy, regarding Tehran’s long-term interests in Syria.