Putin, Erodgan and Rouhani meet to discuss Syria's future for the first time since Trump announced the United States would withdraw troops from Syria. 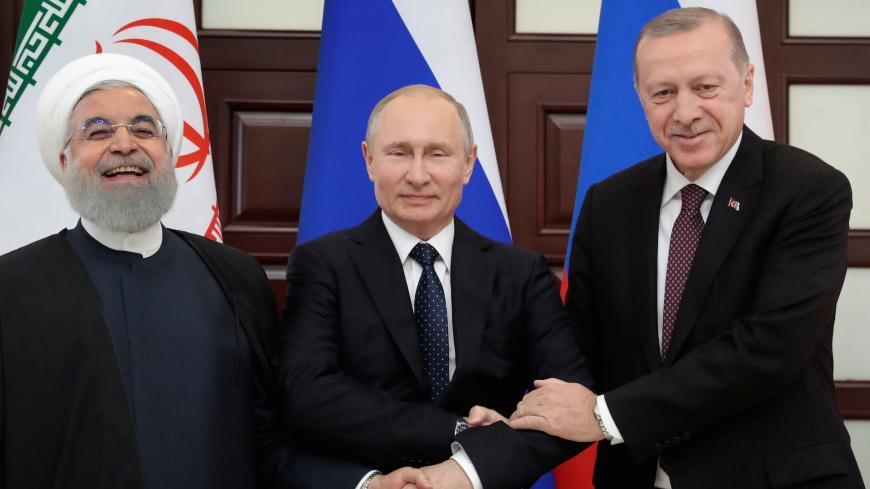 SOCHI, Russia — The presidents of Russia, Turkey and Iran convened for their fourth summit on Syria in Russia’s southern resort city of Sochi on Feb. 14. Earlier leaders of the “guarantor countries” of the Astana process met in November 2017 in Sochi, in April 2018 in Ankara and in September 2018 in Tehran.

Given that this is the first meeting of Astana guarantors since the US drawdown announcement, political and on-the-ground implications of Donald Trump's decision set a certain tone and framework for the Sochi talks.

Prior to the meeting in the trilateral format, Putin hosted Recep Tayyip Erdogan and Hassan Rouhani for bilateral discussions. The Russian leader began both encounters by expressing respective condolences on the collapse of a residential building in Istanbul on Feb. 6 and on the terrorist attack in southeast Iran on Feb. 13.

“Friends, we have accomplished a great deal together, we have come a long way," Putin told the Turkish delegation. "All of us know that this was not a straightforward task, and it is not over yet. Not all the goals have been achieved, but if we continue working actively, coordinate our efforts and seek compromises, we will definitely succeed."

Putin later told the Iranians: “I would [also] like to say how grateful I am to Iran for its contribution to the settlement in Syria. We have been working hard in a coordinated manner, which is the only way to attain our goal. Not all the problems have been settled. We definitely have enough subjects to discuss in the trilateral format today. As for bilateral relations, I would like to say that our plans are being implemented overall, but we do need to work even more efficiently in this sphere.”

In the run-up to the Sochi meeting, speculations — some substantiated — over a growing rift between Moscow and Tehran grew strong, and both Russian and Iranian leaders chose to mildly acknowledge they exist yet emphasized some cooperative trends.

“[B]etween January and November 2018 our bilateral trade increased by 7.5% and reached $1.5 billion," Putin noted at his 16th meeting with Rouhani. "It is notable that imports from Iran have grown by over 40%. We are working to implement major joint projects in nuclear generation, the oil and gas sector and other fields. We are delighted with this progress. I hope that our meeting today will give a fresh impetus to the further development of our bilateral ties.”

Rouhani, on his fifth trip to Russia, echoed Putin's optimism: “Happily, relations between Russia and Iran are very good and continue to develop. They are moving toward a strategic level. We hold consultations on various international and regional matters. … Our cooperation on the settlement in Syria is going forward very well. We are confident of our cooperation in the fight against international terrorism.”

The summit in Sochi reiterated a central trend within the Astana trio that the previous gathering in Tehran exposed: Disagreements within the Astana trio persist, yet the three states continue to value their framework, which, in the absence of a better alternative, helps Moscow, Tehran and Ankara promote their own agendas and coordinate efforts in moving the course of action in Syria.

At a press conference following the talks, Putin said, “Within the Astana process … we managed to create a truly efficient mechanism of direct contacts between the Syrian government and the armed opposition. Astana and Sochi have hosted 11 meetings. … These meetings facilitated the progress in achieving a peace settlement in the Syrian Arab Republic. It is certainly a positive result that we have achieved together.”

The big difference from the past meeting was the factor of the US presence in Syria. The conventional wisdom at the time was that American forces were a serious irritant for the three. Now that the United States seems to be on its way out, two ideas have crystallized: why this presence was a problem for each of the states, and how Putin, Erdogan and Rouhani seek to play it, each for their own benefit.

"Should the [US] decision to leave Syria be implemented, the move will contribute to stability and security in Syria in light of aforementioned principles [sovereignty, independence and territorial integrity],” the final communique from the meeting reads.

The devil is in the details when it comes to individual country positions, though.

Iran’s Rouhani argued, "Over the last 20 years America has played a destructive role in our region, be it in Afghanistan, in Iraq, in Syria and now in Yemen. … We believe America should revise its approach.” He added, however, that he didn’t feel particularly optimistic about the US withdrawal.

Putin, somewhat contrary to official Russian assessments as well as his own earlier skepticism, expressed more confidence in the US decision, by separating, in his usual manner, “Trump’s wheat” from “Washington’s chaff.”

Of Trump's desire to wind down the American presence in war-torn Syria, Putin said, "We know that Donald Trump has been actively working to deliver on his campaign promises. This is a rather rare practice in the political life of the United States."

President Erdogan said the US withdrawal “must not lead to a vacuum of power on the freed territories and the reign of terrorists there.”

He added that Ankara expects Astana partners to “assist in ensuring there’s no terrorist corridor on the Turkish-Syrian border.”

This in itself is an interesting statement, perhaps signaling that Turkey has given up on its earlier idea of creating a “safe zone” with the United States and is now considering Russian offers.

Remarkably, President Rouhani spoke for the Kurds, urging that "their rights should be ensured in the future of Syria and they should have their role in the Syrian sovereignty.”

Days before the Sochi gathering, Russian military police expanded their patrol area near Manbij, into the Kurdish-dominated settlement of Avsharia, to “prevent any type of provocations" from either side.

​Idlib has come up as yet another contentious issue. The three leaders spoke against the growing influence of Hayat Tahrir al-Sham in the Idlib de-escalation zone. President Erdogan even reminded everyone of the respective memorandum the Russian and Turkish militaries signed in Sochi in 2018 as a guarantee for Idlib to be stabilized. But he also spoke of Turkey's concerns over a potential humanitarian crisis that may unfold as a result of a military operation.

“Turkey has done a lot, despite all the difficulties, despite provocations by some countries, to keep calamity [from] Idlib,” Erdogan insisted.

Putin, however, signaled Moscow’s unease with the protracted stalemate over the area.

“We need to agree on how to provide for the final de-escalation in Idlib," Putin urged Erdogan. "We are managing the cease-fire in the province, but that does not mean we have to accept the presence of terrorist groups in Idlib. This is why I suggest examining practical steps that Russia, Turkey and Iran might take together to eradicate the terrorist stronghold completely.”

The security and geopolitical issues have not entirely subsided important practical matters. The final communique reaffirms the leaders’ commitment to expedite the work on the Syrian Constitutional Committee in close coordination with all the involved Syrian parties and the UN envoy on Syria, Geir Pedersen.

A special emphasis was put on the return of Syrian refugees and the restoration of the country. The former, the trio agreed, should be carried out in partnership with the UN Refugee Agency (UNHCR). The latter should be carried out with international humanitarian organizations and focus on the restoration of schools, hospitals and water and electricity supply systems. This, too, is an interesting development, given that earlier Astana guarantors, Russia in particular, appealed to European states and the Gulf to act as prime donors for the reconstruction of Syria. This in no way suggests Moscow reconsidered its approach, but it may signal that now that a new element — US sanctions on those cooperating with Damascus — is in place, Russia is seeking every option that may work.

The United States may be out physically, but the leverage it’s likely to exert will still be influential. The American “game of denial” of the trio successes, as seen in Russia, Iran and, to a lesser degree, Turkey, is a new level that the Kremlin will find much more difficult to work against. But this is a fight that will continue to glue Moscow and Tehran together, despite the disputes.