The switchboard in Sochi was buzzing as Russian President Vladimir Putin reached out to a number of major players in the Syrian peace process in preparation for Wednesday's Russian-Iran-Turkey summit. 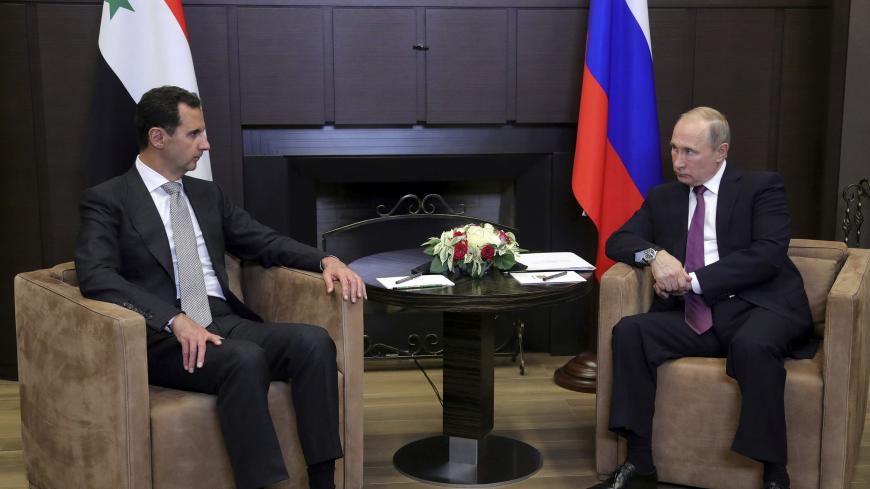 MOSCOW — Syrian President Bashar al-Assad made a snap, four-hour visit Nov. 20 to Sochi. On Nov. 22, this southern resort city — which is Russian President Vladimir Putin’s preferred residence during the cold months — will be hosting the Russia-Iran-Turkey summit. All of the developments are in large part guided by Moscow's efforts to settle the six-year Syria crisis.

Assad's meeting was carried out in utmost secrecy and not announced until the early morning in Moscow, when Assad was back in Damascus.

Assad's trip this week marks a new milestone for the Syrian war on at least two fronts. First, it’s a symbolic gesture to officially set off a transition from military operations to political processes. Second, it’s a sign that Russia’s own military campaign is coming to an end and Moscow will have to turn to other means to ensure its presence and exert influence in Syria. It was important for Putin to articulate these two things to Assad clearly.

“I believe that terrorism is a global problem and the fight against it is, of course, far from over. As for our joint efforts against the terrorists in Syria, this military operation is nearing completion indeed," Putin told Assad. "I believe that the main task now is to launch the political process. I am glad that you are ready to work with anyone who wants peace and conflict resolution.”

The Assad visit was deemed to have a big public relations component, and the way it was played in and echoed through the media suggests it reached its objective. The two leaders praised their joint successes, with Putin speaking highly of the negotiations in Astana, Kazakhstan, and the idea for the de-escalation zones, and Assad stressing the pivotal role Russia played in Syria.

“It should be acknowledged that the [Russian] operation brought progress to the political settlement in Syria," said Assad. "And the process that was started and that Russia promoted with various efforts continues. … The same goes for the plans to hold the Syrian National Dialogue Congress," which is tentatively set for early December.

On a substantive level, Putin wanted to have Assad come to Sochi to coordinate views on the next steps for a number of key issues Moscow is promoting, in particular the expected congress with the Iranian and Turkish presidents, which Assad supports. Moscow is aware of the risks Assad could pose if he doesn't cooperate when a consensus is reached on the Syrian political transition, and he could also upset further Russian initiatives, so having a face-to-face conversation was vital.

Moscow also wants to engage all stakeholders to ensure success for its “Syria plan.” The batter for the Syrian settlement has been beaten and is now being baked, and the Putin-Assad talks will be the icing on the metaphorical cake.

Speaking to Al-Monitor not for attribution, a senior Russian diplomat who had been working on the Syria issue from the Russian end said, “Moscow had started to work on a Syrian plan a while ago.” The Putin-Trump agreement was an important element to this “plan.”

“We made some good progress with this agreement and the Nov. 8 memorandum,” the diplomat said, "but even if the Americans had declined to work with us under the agreed framework, we would have continued on our own by working with the Astana partners [Turkey and Iran]. The agreement was important in that it politically allows the settlement to be discussed within Geneva sooner rather than later.” The diplomat declined to provide details of what this “plan” constitutes, saying only that Moscow “is interested to ultimately take the settlement process into Geneva but escape the mistakes and problems we all faced there previously.”

He recommended, “Read our official documents carefully, our intentions are all in there."

Meanwhile, in the runup to the Sochi meeting Nov. 22, a lot of back-channel shuttle diplomacy and military contacts have been underway, both within the “Astana troika” and between them and Damascus. On Nov. 19, the foreign ministers of Russia, Turkey and Iran gathered in Antalya, Turkey, to discuss details of preparations for that meeting — including the most thorny issues, such as the Kurds’ participation in the Syrian National Dialogue Congress, the potential creation of a fifth de-escalation zone in Syria and the possible presence of monitors from the guarantor countries in the Idlib de-escalation zone. The final decisions on these issues are supposed to be made in Sochi. The military representatives of Russia, Turkey and Iran, including the heads of the general staffs, are having their own consultations at a separate venue.

Therefore, by the time Putin sits down with Iranian President Hassan Rouhani and Erdogan in Sochi, Russia will have coordinated its positions with major actors and will have a more solid mandate to negotiate an ultimate deal. Putin’s remark at the meeting with Assad that Moscow hopes “the UN will join the [political] process at its final stage” suggests Putin was again referring to the Geneva process, and that Russia eyes the UN as the ultimate decision-making body.

Russia also doesn’t seem to be worried about the parallel process taking place in Riyadh. Moscow is delegating its Syria envoy, Alexander Lavrentyev, for the opening and closing of that meeting, as well as a news conference to stay abreast of the process. But Russia's minimal level of involvement suggests it believes staying its own course is more efficient at this stage. With this in mind, Moscow moves to the trilateral summit Nov. 22 in Sochi.