President Recep Tayyip Erdogan has reportedly agreed to accept Kurdish participation at the Syria congress in Sochi, as long as those Kurds do not belong to the Democratic Union Party. 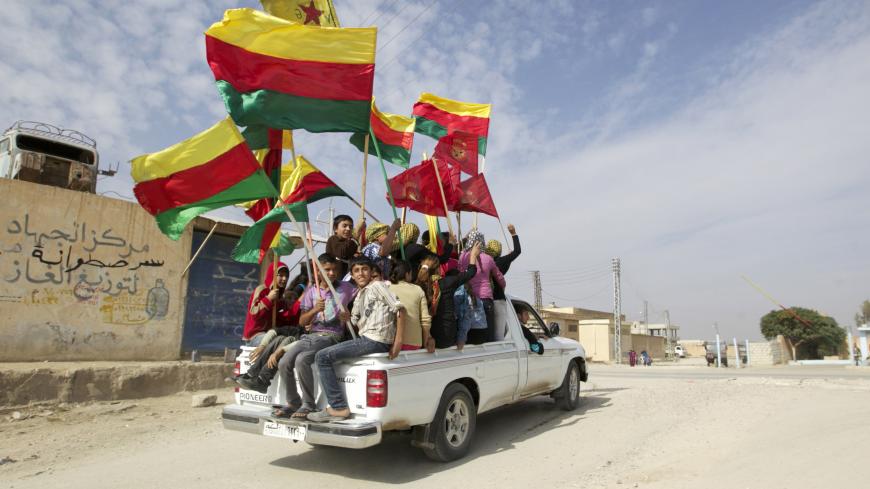 Since the outbreak of war in Syria, Turkey’s predicaments have forced it to turn a number of its red lines to yellow lines. Now, Turkey seems to be taking a step back on the Kurdish issue.

A sensitive topic these days is whether the Kurdish Democratic Union Party (PYD) — the prime mover behind the push for “democratic autonomy” in northern Syria — will be invited to the Syrian National Dialogue Congress that Russia is organizing in Sochi. In return for cooperating with Moscow and Tehran in the Astana process, Ankara wants to get dividends on the Kurdish issue. Ankara's two critical demands are known: a green light for a military move on Afrin to uproot affiliates of the Kurdistan Workers Party (PKK), and the PYD’s exclusion from the Sochi congress.

On Dec. 11, Russian President Vladimir Putin met with Turkish President Recep Tayyip Erdogan for the seventh time this year, flying to Ankara in a whirlwind regional tour, which also included a visit to Syria's Khmeimim air base, where he ordered the Russian military to begin its withdrawal from the country. According to Deutsche Welle’s Turkish service, Erdogan reiterated his objections to PYD attendance in Sochi. Putin responded with a proposal for the participation of non-PYD Kurds. Erdogan reportedly raised no objections to this formula. “Diplomatic sources who closely followed the meeting say Erdogan and Putin agreed that the Syrian National Dialogue Congress can convene with the participation of Kurds other than the PYD,” according to the report.

The two leaders shared few details about their talks in remarks to the press after the meeting. Erdogan spoke of discussions on “additional steps” in Syria. “We will contribute to the Geneva process with the aim of finding a permanent solution in Syria,” he said.

Putin said, “During the trilateral meeting of the Russian, Iranian and Turkish presidents on Nov. 22 [in Sochi], we reached certain agreements concerning [political settlement in Syria]. Now it is important to go through with them. In particular, we continue to work together on preparations for the Syrian National Dialogue Congress to be held early next year. The plan is for the congress participants to analyze issues … such as future state structure, adopting a constitution and holding constitution-based elections under the supervision of the United Nations.”

Referring to the Astana process, Putin added, “We continue to maintain the cease-fire and ensure stability in the de-escalation zones and to increase trust between the conflicting parties. … I would like to note the positive contribution of the Turkish Republic and President Erdogan to the reconciliation between the parties.”

Russia’s initial invite list for Sochi included 33 parties and groups. It had extended two invitations to the PYD in terms of separate delegations from Qamishli and Kobani. The Kurds have now changed their approach — both because of the prospect that the PYD would be unable to attend under its own banner and because of its desire to have the Democratic Federation of Northern Syria included as a whole. Members of the self-rule administration are now seeking ways to get around Turkey's objections and ensure the participation of all ethnic elements involved in the autonomy movement, and not only the Kurds. To do so, they have drawn up a list of numerous figures and groups involved in the Democratic Federation rather than institutional parties.

Due to Turkey’s reservations, the congress has been twice postponed. Originally scheduled to take place in November, the congress was then postponed to December and now January. The Kurds have adopted a flexible approach that could facilitate Putin’s efforts.

Abdul Karim Omar, a top foreign relations official in the Jazeera canton, attended the Kurds’ Dec. 3 meeting with Russian generals in Deir ez-Zor. He told Al-Monitor that the Kurds gave the Russians a list of 140 names representing all communities in the Democratic Federation of Northern Syria, including Kurds, Arabs, Syriacs, Assyrians, Chechens and Turkmens. After the initial invitation to the congress in November, he said, officials from Russia's Foreign and Defense ministries visited the region to discuss the issue.

Asked about any contacts with Damascus on participation in Sochi and Geneva, Omar said, “We have absolutely no communication with the regime regarding [any] settlement. Late last year, we had a meeting with the regime at Khmeimim through the mediation of the Russians. The regime, however, was not ready for any settlement. Since then, we have had no meeting with them on a political solution.”

The new formula designed for Sochi offers Turkey a dignified, honorable exit as it keeps the PYD away from the spotlight. Yet Ankara’s essential aim is to prevent any pro-PKK, self-rule administration from maturing and gaining a de jure status across its border. This, in fact, is what Turkey expects as an end result from its partnership with Russia. At the same time, however, Turkey is aware that a solution excluding actors who control one-third of Syria’s territory (under the umbrella of the Syrian Democratic Forces) cannot be a real solution and could also pave the way for US entrenchment in the region. This awareness appears to be producing some flexibility.

Meanwhile, one peculiar expectation seems to be softening Ankara. Although the democratic self-rule project has advanced from Iraqi Kurdistan to the western banks of the Euphrates, Ankara has focused its objection on Afrin, as if things will let up once the PYD flag comes down in this particular area. The talk in Ankara is about a scenario in which Damascus takes over Afrin. It may sound like black humor, but a Turkish official knowledgeable on the issue — quoted last week by Haberturk columnist Muharrem Sarikaya — believes that Afrin could change hands overnight. “They could suddenly go away one night. The PYD and PKK armed forces could be gone, bag and baggage, with only the local population left,” the official said. According to the official, Damascus — with Russia’s help — would let the PYD know that it wants to take control of Afrin and would appoint its own local administrator. Thus, someone appointed by Damascus would govern Afrin.

One must be quite detached from reality to argue that the PYD or its armed wing, the People’s Protection Units, could vanish overnight from Afrin. Still, the comments offer an important hint of what Ankara has in mind for a face-saving exit from Syria. There is no doubt that what actually happens in the north will be decided through negotiations. Still, flying the Syrian flag at the border, along with some other symbolic steps, could serve the Kurds as well as the Syrian government, since both of them want Turkey to withdraw all the elements it has thrust into Syria. Having failed to achieve its goals, Ankara could see a surgical operation in Afrin as the way to make an honorable exit from Syria and start rebuilding bridges with Damascus.