The Sochi meeting was crippled from the very beginning because of Turkey's military offensive in Afrin and the alienation of the Kurds. 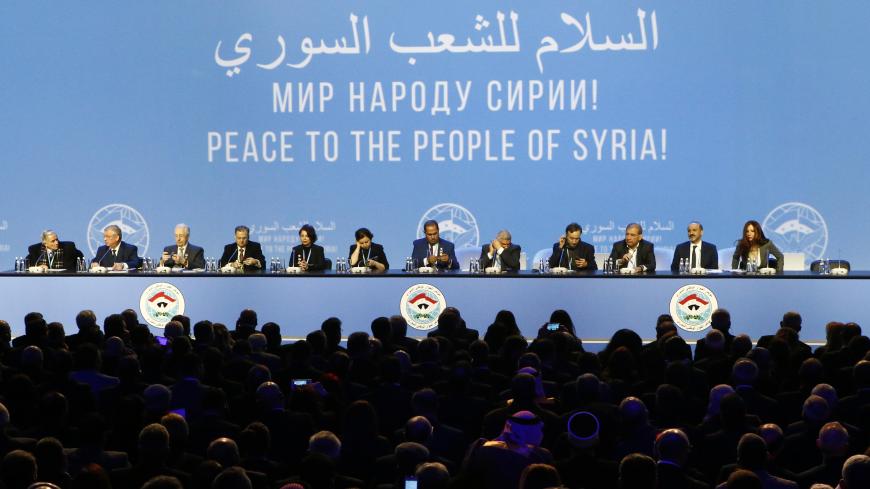 Participants attend a session of the Syrian Congress of National Dialogue in the Black Sea city of Sochi, Russia, Jan. 30, 2018. - REUTERS/Sergei Karpukhin

The Sochi summit that took place at the end of January was designed to underline the successful achievements of Russia’s involvement in Syria and to consolidate the partnership among Russia, Turkey and Iran. However, the summit revealed the limitations of Russia's Syria policy instead of Moscow’s growing influence across the Middle East.

The Russian propaganda machine painted a rosy picture by emphasizing that more than 1,500 Syrians participated in the summit to rebuild their country. However, these efforts couldn’t conceal that the Syrian Kurds, outraged by Turkey’s Afrin operation, boycotted the meeting.

Not only was the Syrian Kurdish Democratic Union Party (PYD) absent from Sochi, but also absent was its main rival, the Kurdish National Council — a pro-Massoud Barzani alliance recognized by Turkey. Hamid Darwish, a historic figure of the Syrian Kurds, also declined to go to Sochi because of Turkey’s military operation. More interestingly, Abdel Basset Sieda, the former chairman of the Syrian National Council that Turkey formed and supported, not only refused to go to Sochi but also resigned from the Turkey-backed Syrian group.

In sum, there was no real Syrian Kurdish representation in Sochi. The Syrian Democratic Forces (SDF), which control a sizable swath of Syrian territory, were not in Sochi either.

There have been disagreements among the participants of the summit as well. For example, 83 delegates from the Syrian opposition unexpectedly refused to sit down for talks under the official Syrian flag. They kept 1,511 other participants waiting for several hours on Jan. 30 and finally boarded the plane and flew back to Turkey.

The opening ceremony has been untypically chaotic for a meeting organized by Russia. Foreign Minister Sergey Lavrov’s speech was interrupted several times by members of the audience shouting slogans.

Thus, the Sochi meeting was crippled from the very beginning because of Turkey’s military operation in Afrin and the alienation of the Kurds.

The Sochi meeting was crippled from the very beginning because of Turkey’s military operation in Afrin and the alienation of the Kurds.

Nonetheless, Russia pushed forward — at the end of deliberations, a communique that the Russian media titled “Syrian Congress in Sochi brings war-torn country closer to constitutional reform” was adopted.

“Russian President Vladimir Putin had a telephone conversation with the president of the Republic of Turkey, Recep Tayyip Erdogan. … The leaders stressed the importance of implementing the reached agreements aimed at the effective promotion of the Syrian political settlement process on the basis of UN Security Council Resolution 2254. Putin and Erdogan also discussed Russia-Turkey coordination to ensure stable operation of de-escalation zones in Syria and interaction in the Astana format,” reported Sputnik news.

UN Security Council Resolution 2254, which envisaged a “Syrian-led and Syrian-owned political transition in order to end the conflict in Syria,” was to be realized in 18 months, but is long overdue.

Indeed, the last part of the Sochi communique was a display of this helplessness.

“We agreed to form a constitutional committee comprising the Government of the Syrian Arab Republic delegation along with a wide-represented opposition delegation for the drafting of a constitutional reform as a contribution to the political settlement under the UN auspices in accordance with Security Council Resolution 2254. … We appeal to the United Nations secretary-general to assign the Special Envoy for Syria for the assistance of the Constitutional Committee work in Geneva,” the communique said.

Having decided on forming a constitutional committee comprising the regime in Damascus and an undefined but widely represented opposition delegation is only going back to square one: Geneva.

Paradoxically, the Sochi summit also revealed the impotence of Russia as the main arbiter of the Syrian conflict. The Turco-Russian alliance that led the Astana process did not complement Geneva but in a way was aimed to replace it.

With a Russia that has become a formidable rival to the United States in the Syrian theater, with a Turkey outraged by Washington’s support for the adversarial Syrian Kurdish People’s Protection Units (YPG), and with Iran seen as a hostile element by the Donald Trump administration, Geneva is becoming increasingly irrelevant to resolving the Syrian conflict.

Sochi, by the last paragraphs of its communique, passes the ball to Geneva and implicitly declares the limitations of Russia in Syria.

Indeed, Turkey was quick to endorse the outcome of Sochi and link it to Geneva.

“Turkey has acted in a constructive manner about the Russian Federation’s Syrian National Dialogue Congress initiative from the beginning," read a Turkish Foreign Ministry statement. "The most important outcome of the congress was the call for the establishment of a Constitutional Committee and the selection of a pool of 150 candidates for this committee. The Turkish delegation, which was given the mandate to represent opposition groups that didn’t attend the congress, submitted a list of 50 candidates in consultation with the opposition. The establishment process of the Constitutional Committee will be closely monitored by Turkey as the guarantor of the opposition.”

Thanks to its control over the Syrian opposition, Turkey definitely will have leverage in shaping the future steps of the resolution process. However, its military operation in Afrin and its ever-widening chasm with Washington are making Ankara more reliant on Moscow. The latest standoff in Idlib revealed this. The Idlib rift also implies how difficult it would be for Moscow to reconcile the differences among its partners in Syria.

If Turkey’s Afrin operation drags on with high civilian casualties that can't be concealed from the attention of the international public for long, the endorsement of Ankara could turn out to be a liability rather than an asset for those actors in the Syrian theater.

Moreover, if Turkey doesn't or can't deliver the Syrian opposition in Idlib to its detractors, freewheeling in Afrin could be jeopardized.

“We continue to monitor the developments in northern Syria, which are a matter of grave concern,” said Maria Zakharova, spokeswoman of the Russian Foreign Ministry, in an apparent change of tone that might be an indication of Russia’s position shift.

Putin is getting ready for March elections, and Erdogan could call for early elections this coming summer. The partnership between the two men and the seemingly converging interests of the two countries constitute a strong connection to the domestic political calculations of both strongmen.

In the Levant, no shifting alliances and partnerships should be surprising. Everything is possible. Nothing is impossible.

by Murielle KASPRZAK and Joseph SCHMID | AFP | May 26, 2022
END_OF_DOCUMENT_TOKEN_TO_BE_REPLACED