As Russia seeks to overcome Turkey’s objections to Kurdish participation in the planned Sochi conference, Moscow welcomed Kurdish commanders to assure them Kurds are not being excluded. 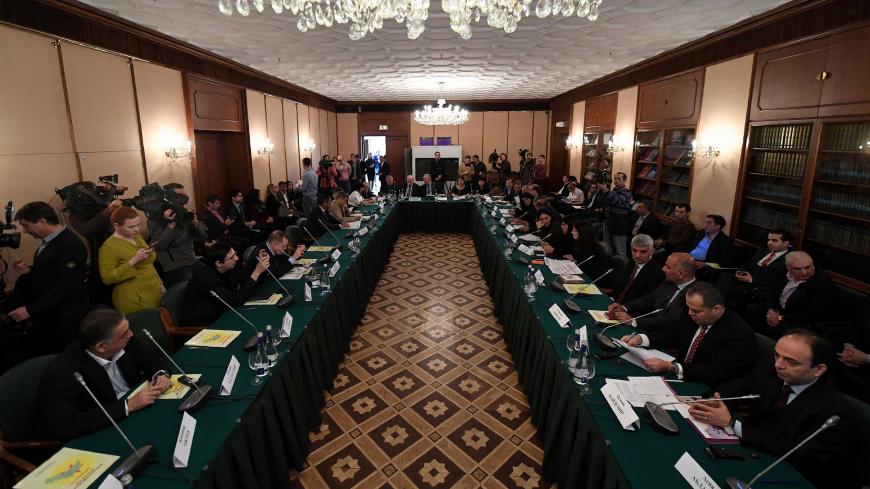 Violence and combat in Syria appear to be easing somewhat as 2018 approaches, but political tensions remain high. As the Russians work to bring together Syrian opposition forces and the regime to draft a new constitution at Russia's proposed Syria National Dialogue Congress at Sochi, Kurdish participation continues to be problematic.

There have been predictions that Damascus will not declare war on the Kurds just to please Ankara. Yet Syrian President Bashar al-Assad said Dec. 18 that all those who cooperate with the United States — which includes the Kurds — are "traitors." Assad's unexpected outburst boosted expectations that, in return for Assad terminating Kurdish democratic autonomy in northern Syria, Ankara would be likely to rebuild bridges with Damascus.

However, this week Turkish President Recep Tayyip Erdogan suddenly declared Assad a “terrorist” who is impossible to work with. Those hoping for a honeymoon between Ankara and Damascus were deeply disappointed.

Incessant political squabbles again remind us how fragile the political process in Syria can be. But Russia, despite all bottlenecks hampering a settlement, continues with its efforts. Unless the congress is delayed again, it will take place Jan. 29-30. Meanwhile, Russia searches for ways to have the Kurds represented without breaking its promise to Iran and Turkey to jointly agree on invitees.

By doing so, Moscow gives the impression that it respects Ankara’s red lines but isn't hesitating to display its relations with the Kurds. The latest such display was to invite Sipan Hemo, general commander of the Syrian Kurdish People’s Protection Units (YPG), to Moscow several weeks ago. Hemo was ostensibly invited to attend a ceremony awarding heroism medals to Russian commanders who fought in Syria. While he was in Moscow, Hemo had a series of meetings with Russian general staff, foreign intelligence and defense officials.

According to Hemo, Russians confirmed that 155 names from the Kurdish democratic autonomy in northern Syria will be at Sochi. Asked about the sensitive topic of the Syrian Kurdish nationalist Democratic Union Party’s (PYD) participation, Hemo noted that the Russians said the invitation to the congress was not for parties but for the entire Syrian people.

Earlier, Alexander Lavrentyev, special representative of the Russian presidency in Syria, had said organizers tried hard to achieve “maximum representation” of Kurds while avoiding Turkey’s objections. “We don’t anticipate PYD participation at the moment,” he announced Dec. 23. Asked if Kurdish delegations will be left out unless Iran and Turkey approve, he added, “I think we can solve this between ourselves."

That was followed by Russian Foreign Ministry spokeswoman Maria Zakharova saying, “We are working on the presence of Kurdish representatives.”

Aldar Halil, a prominent name in the Movement for a Democratic Society (Tev-Dem) — the multicultural governing coalition of Rojava in northern Syria — said there has been no change in the Russian position: “In all our talks with Russia, they told us we have to be at the congress. We haven’t been informed of the vetoing of any names. Sipan Hemo, too, was told in Moscow that there is no change in the Russian position."

Halil told Al-Monitor, “We control 30% of Syria. No matter who is searching for a solution, there will not be one unless we are involved. We really don’t know what the outcome of Sochi will be. We don’t know what the plan is and what is expected. They will assemble 1,500 people at Sochi for two days. What will they achieve? They will form a constitutional committee; that is all we know. Nevertheless, we — as the administration of northern Syria — are ready to be present in all platforms toward a settlement."

Actually, from the outset, Kurds have been following a course that will aid Russia’s efforts to end Turkey’s objections. Naturally, the ongoing debate on whether the PYD will attend the congress reinforces impressions in Turkey that Erdogan’s red lines still prevail.

Halil said the title of the list consisting of 155 names is “Autonomous Administration and Political Entities.” There is no mention of the PYD. Also, names that Erdogan was likely to veto are not included in the list.

“We told the Russians that we will not come to represent the Kurds exclusively. We will represent Arabs, Kurds, Syriacs, Chaldeans, Chechens and Circassians," Halil said. "We gave them a list of 155 names who will represent Raqqa, Hasakah, Qamishli, Kobani and Manbij. Our list was accepted as is. We knew the names Erdogan would object to, and they were not put on the list. For example, PYD co-chairs and YPG commanders are not on the list.”

Tev-Dem isn't concerned about what reaction US President Donald Trump's administration might have toward the Kurds' blossoming dialogue with Russians. “We have not surrendered our will to anyone," Halil said. "We do what we think is right. Our relations are not confined to a single party. Our relations with America and Russia are equidistant. The United States has not objected to our contacts. They know us and know whom we talk with."

Halil also said that the Syrian regime cannot afford to fight with the Kurds as it has “no strength” for that, and that the regime was trying to appease Turkey and Iran with its recent declaration about traitors.

In sum, some issues related to the Syrian congress will remain fluid until all invitations are set. One should expect last-minute surprises until the congress finally meets — if that ever happens.