Is Turkey setting a Kurdish trap?

In the lead-up to Turkey's Nov. 1 parliamentary elections, skeptics of the government are wondering if Ankara will resort to something "extreme" in Syria. 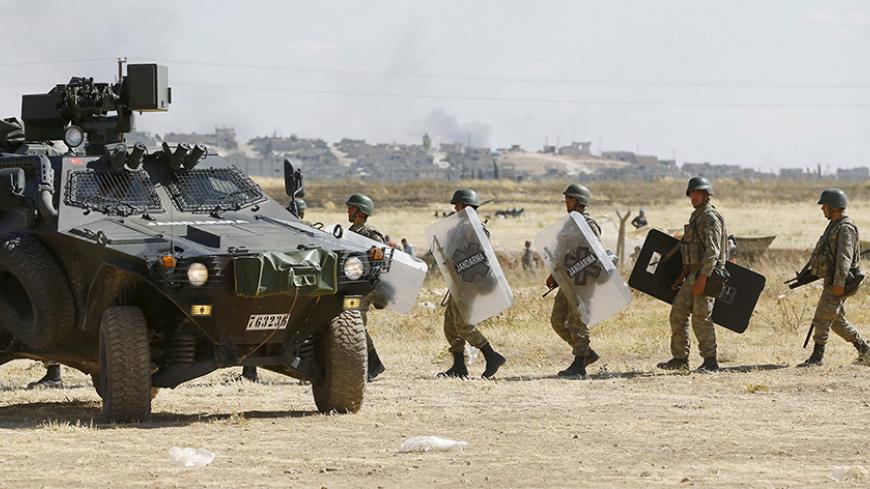 Many people skeptical of the Turkish government are wondering whether officials in Ankara might resort to drastic measures in Syria in the run-up to the Nov. 1 legislative elections. During the June 7 elections, the government tolerated Islamic State (IS) attacks against Kurds across the border in Kobani. Thus far, the upcoming elections have been preceded by government clashes with the Kurdistan Workers Party (PKK) in Turkey and verbal attacks against the Kurdish Peoples’ Democratic Party (HDP) entangled in the Syrian Kurdistan (Rojava) agenda. Skeptics believe the government will soon realize it won't gain much through such tactics and, because of its desire to push the HDP below the 10% vote threshold, might resort to more extreme tactics in northern Syria.

Recently, the Turkish Armed Forces (TSK) struck at the People’s Protection Units (YPG). The YPG issued a brief statement acknowledging that the Turkish army had attacked its positions on the border, using A-4 guns from 7 p.m. to 9 p.m. on Oct. 24 and MG-3 guns from 2 a.m. to 4 a.m. on Oct. 25. TSK typically lists all engagements on its website, but it did not mention these particular incidents. The government kept mum until the night of Oct. 26, when Prime Minister Ahmet Davutoglu said in a television broadcast, “We had told both Russia and the US that the PYD will not cross to the north of the Euphrates River. We struck the PYD twice.”

Pro-government media reported a different version of events. According to the Daily Sabah, “Turkish airplanes hit two YPG boats trying to infiltrate to the west of the Euphrates. Militants in the boat were warded off.” Sabah also carried reports that the YPG had been trying to infiltrate the area from Azaz east to Jarablus, which Turkey considers a safe zone.

Those who reported this news were apparently unaware of certain facts. The YPG and its Arab allies captured Tell Abyad in June. The Jarablus-Raqqa axis lies between Kobani and the Azaz-Marea line, which Turkey has declared a red line. In other words, the area in question, as reported by the Daily Sabah, is controlled by IS. If, as reported, YPG fighters had crossed to the west of the Euphrates, they were not heading toward the safe zone Turkey, but toward IS-controlled Jarablus. If Turkish planes really struck at YPG boats on the river, it would mean Turkey was preventing YPG units from reaching IS positions, thereby indirectly defending IS.

Kurdish sources in northern Syria have told Al-Monitor that the Daily Sabah report was baseless and that the YPG has not carried out operations with boats on the Euphrates. At this point, no operation is in the works to capture Jarablus, the sources said. According to information reaching Al-Monitor, there were four instances of fire from Turkey, twice toward Kobani and twice toward Tell Abyad. The Kurds call this “provocative harassment fire.”

The Kurds had met with US officials at Erbil to discuss a priority operation against Raqqa, but Russia’s military interventions in Syria has changed many plans in the region.

Salih Muslim, PYD co-chair, told Al-Monitor that two civilians had been wounded at Buban by Turkish fire, stating, “These attacks are provocations. It is election propaganda by the AKP [Justice and Development Party] government. Our people will not be provoked by these attacks.” Muslim also said that there are occasional exchanges of fire in the area near the Euphrates between IS and YPG positions, but that the YPG has not attempted to cross west of the Euphrates.

Muslim stated, “Ankara’s policy is only to prevent the YPG from crossing the river. [IS] is slaughtering women and children west of the river, but Ankara doesn’t say anything about that. To say the YPG must not move to Jarablus only means let [IS] do what it wants.”

As the Nov. 1 elections near, Turkey’s policy of creating dangerous tension is being applied at Tell Abyad. In an Oct. 24 speech targeting the HDP by chastising the PYD, President Recep Tayyip Erdogan clearly enunciated this policy, threatening Rojava (the Kurds in northern Syria) using unverified information: “These people think of their own interests and to that end they can cooperate with the PKK or [IS]. Isn’t this what they were doing at Tell Abyad? [IS] enters Tell Abyad and then leaves, and the PYD enters the town. This is all a game. Who owns that place? Ninety-five percent of the people in that town are Arabs and Turkmens, with 5% Kurds. Their goal was to turn that place into a canton, and that is what they did. This is now posing a threat to Turkey. That means Turkey will do what is necessary. Let everyone know this.”

Erdogan’s narrative needs to be questioned. For one thing, the story of how Tell Abyad changed hands contradicts the reality. Erdogan, who has frequently repeated accusations of ethnic cleansing by Kurds in northern Syria, now has resorted to manipulating the number of Kurds in the area. Syrian sources consulted by Al-Monitor estimate the number of Kurds to be between 30% and 45%, not the 5% Erdogan claims. Groups supported by Turkey had begun expelling the Kurds from Tell Abyad on July 19, 2013, after they captured the town. This continued until Aug. 5, 2013, when IS took sole control of it. IS seized Kurdish businesses and posted signs declaring them “state property.”

According to information gathered by Al-Monitor, about 40% of the Kurds who had fled from the jihadis have ben able to return to Tell Abyad. Of 250 Armenian families that escaped to Aleppo, only 50 have returned. As one might recall, Erdogan had said in October 2014, “I don’t want to argue whether Kobani is Kurdish or Arab. But its real name is Ayn al-Arab.” This time, however, he has adopted the mantra “Tell Abyad belongs to Arabs and Turkmen.” He does want to acknowledge another piece of reality that would refute his narrative: Today’s Tell Abyad was established in 1915 by Armenians deported from Anatolia.

In regard to Erdogan’s sensitivity to the issue of establishing cantons that led him to declare Oct. 25, “We won’t let that happen,” here is what has transpired: As a result of intensive collaboration between the Movement for a Democratic Society (TEV-DEM) and representatives of tribes in Tell Abyad, an executive council and an assembly were formed in October 2015. The council consists of seven Arabs, four Kurds, two Turkmen and one Armenian. The assembly also reflects the ethnic composition of the area. As in Kobani, Jazeera and Afrin, a co-chair leadership was adopted for the governance of Tell Abyad. Mansur Salloum, an Arab, and Leyla Mustafa Muslim, a Kurd, were elected co-chairs. Tell Abyad was absorbed into the Kobani canton also in October. In short, a democratic, autonomous administration in line with Tell Abyad's ethnic reality has been established in the town.

How do the Kurds assess this policy of heightened tensions they are facing? Ferhad Derik, a TEV-DEM executive council member who lives in Tell Abyad, told Al-Monitor that the Kurds feel they are being provoked.

“We are aware of the game being played here. If the YPG responds, [Ankara] will tell the world, ‘You see, they are terrorists.’ We are careful not to fall into that trap. There was also harassment fire before, but the YPG did not respond. [Ankara] incessantly voices accusations of ethnic cleansing, which are baseless. We are not motivated by revenge despite what was done to the Kurds before. There are many houses damaged and booby-trapped. Only today [Oct. 27], two YPG militants were killed while dismantling a booby trap. But as security improves, and there is less probability of IS attacks, people are returning to their homes.” Derik spoke to Al-Monitor while attending the funerals of the two fighters.

A Kurdish source in Kobani said that Rojava's administration is developing connections for international cooperation despite Ankara’s efforts to torpedo the process. In this context, Ilham Ahmed, a TEV-DEM executive council member, made contacts in New York during the UN General Assembly in September. On Oct. 21, PYD Co-chair Asya Abdullah and Kobani canton leader Enver Muslim met in Moscow with Deputy Foreign Minister Mikhail Bogdanov. During the Oct. 24 session of the Jazeera Canton Legislative Assembly, PYD Co-chair Muslim announced that the PYD will open offices in Berlin, Paris and Moscow.

The critical question now is what Ankara hopes to achieve by fueling the tension. If the YPG returns fire, the government could hit three birds with one stone: It could claim to the international community that the PYD/YPG is a terror organization and in that way try to prevent the PYD from opening offices abroad. It could also use it to obstruct US and Russian cooperation with the YPG against IS. It could also try to influence Turkish public opinion by delivering a massive blow to the HDP because of its support of the autonomy movement in Syrian Kurdistan. To prevent this scenario, the Syrian Kurds will have to keep their cool and act rationally.