Turkish President Recep Tayyip Erdogan is angry with the joint Kurdish-Arab operation to get the Islamic State out of Tell Abyad. 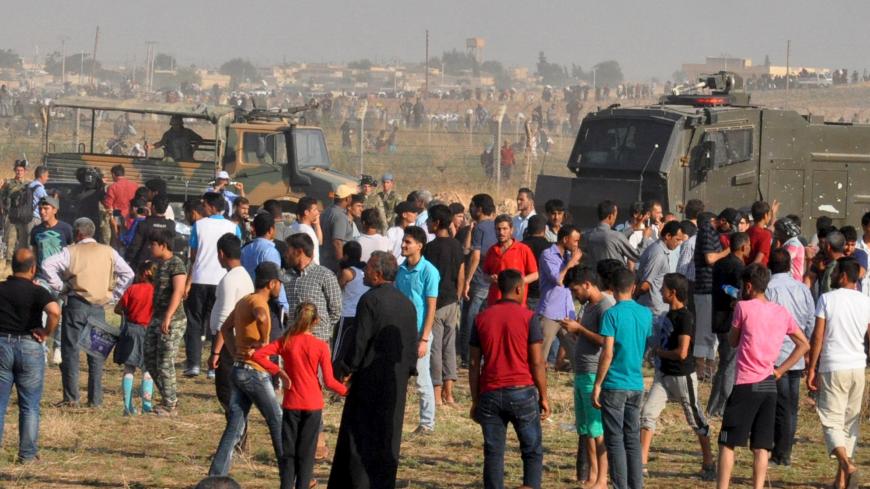 Syrian refugees from Tell Abyad wait on the Turkish-Syrian border after crossing into Turkey near the Akcakale border gate in Sanliurfa province, Turkey, June 14, 2015. - REUTERS/Kadir Celikcan

Ankara appears to be seriously disturbed by joint operations of the Kurdish People's Protection Units (YPG) and Burkan al-Firat forces made up of Arab opposition elements from the Raqqa region, backed by US air support, to oust Islamic State (IS) forces from Tell Abyad in Syria.

Turkish President Recep Tayyip Erdogan claimed Kurds are being settled in areas abandoned by Arabs and Turkmens during the aerial bombing by the Western coalition. In September and October 2014, when IS was besieging Kobani, Erdogan's declaration — sounding like he was delivering good news — that ‘‘Kobani is about to fall” infuriated Kurds. This may help explain his total loss of Kurdish regions in the June 7 elections. Now the question being asked is why Erdogan seems to be so concerned about the possible IS loss of Tell Abyad?

The Tell Abyad border crossing, directly opposite Turkey’s town of Akcakale, was entrusted on Sept. 19, 2012, to a coalition of Jabhat al-Nusra, Ahrar al-Sham, Burkan al-Firat and Liwa al-Tawhid Brigades. That decision had two objectives:

At that time, there were some clashes between the Islamist forces that had taken over Tell Abyad and the Kurdish Front, which then was part of the Free Syrian Army.

According to information provided by Kurdish sources to Al-Monitor, after a lull in clashes the operation to cleanse the area of Kurds began on July 19, 2013, with warning calls from mosque minarets for the Kurds to leave Tell Abyad or be punished. Of 25,000 people in Tell Abyad, which was Arabized by the Baath regime in 1963, about 12,000 were Kurds. Kurds who lived in the Tell Abyad town center and in 18 villages in its vicinity had to emigrate to the Kobani and Jazeera areas as well as to Turkey and Iraq. Those who didn’t paid a high price. Every single Kurdish house was raided until Aug. 5, 2013. Seventy adult males were killed, and about 400 women and children were abducted. It is not known what happened to them. While the international community, not wanting to hamper the revolution, seemed not much concerned with crimes against humanity by Syrian opposition forces, the issue was put on the UN Security Council agenda by Russian Foreign Minister Sergey Lavrov, who asked for a condemnation.

The leadership in Tell Abyad changed hands after some elements of Jabhat al-Nusra joined IS. In January 2014, what is now IS eliminated its former partners in a bloody operation and took full control of Tell Abyad.

The YPG, which succeeded in getting IS out of Kobani, cleaned up the front between Sirrin and Ain Issa and launched a double-pronged operation against Tell Abyad. YPG forces from Kobani attacked from the west and those in Serekaniye from the east.

The YPG’s combat objective was to push IS out of Tell Abyad to put an end to their attacks on Kobani and Jazeera cantons. After recapturing 20 villages in 15 days, the YPG surrounded the town of Suluk.

In the first days of the clashes, some of the civilians escaping from Tell Abyad who massed at the Turkish border were allowed to cross to Akcakale, but those who tried to escape the June 13 YPG operation against Suluk were left to the mercy of IS.

Those who were not allowed to cross the border by Turkish soldiers were rounded up by IS and herded back to Tell Abyad.

Erdogan’s anger with the operation to oust IS from the region became evident when he said on June 11, “The West, which is hitting Arabs and Turkmens of Tell Abyad from the air, is sadly settling the PYD [Democratic Union Party] and PKK [Kurdistan Workers Party] terror organizations in their places.”

Meanwhile, Jabhat Suwar’s Tell Abyad chief, Omer Dede, accused the YPG of threatening the Turkmens by declaring, “Leave your villages or we will burn them down.”

YPG spokesman Redur Halil told Al-Monitor, "There is no such threat. We issued a call saying [IS] should be prevented from using civilians as live shields. We said, ‘Come to Kobani and Jazeera cantons. We will help you. After the war is over, you can go back to your homes.’ Nobody can interpret our call as ethnic cleansing. Most of the villages are already abandoned because of clashes.” Halil added that the YPG was being extra careful to avoid civilian casualties while advancing toward Tell Abyad.

The president of the Syrian Turkmen Assembly, Abdurrahman Mustafa, told Al-Monitor there were no Kurds in Hammam Turkmen, where Turkmens of Tell Abyad lived and a limited number of Turkmen refugees had come to the border to escape IS threats, air raids and clashes. Turkmens who took refuge in Kilis were escaping from the clashes between IS and the Islamic Front.

Syrian Kurdish journalist Barzani Izo, who is in the area of the clashes, said Turkmen villages are not controlled by the YPG. He said, “The YPG could not even get the Kurds who had left the region earlier to return to their own homes. Where are they going to find Kurds to settle in Turkmen homes? There is not a single example to prove this allegation.”

Erdogan’s anger is obviously based on the loss of the de facto buffer zone that had severed contiguous links between Rojava cantons and the arrival of elements he perceives as enemies to the Turkish border. Ankara wasn’t upset when this buffer zone was captured by what is now IS in 2013.

For IS, Tell Abyad and Carablus are vital links between IS headquarters at Raqqa and the Turkish border. Although the border is officially closed, traffic over it has not stopped. IS sends its casualties to hospitals in Turkey through this gate. Akcakale is also the key transit point for foreign militants to reach IS in Iraq and Syria. Those fighters have been getting their first IS training at Suluk.

When the Army of Conquest led by al-Qaeda-affiliated Jabhat al-Nusra and Ahrar al-Sham captured Idlib and Jisr al-Shughur with the weapons they received via Turkey, IS returned to the Syrian front with weapons they captured from the Iraqi army at Ramadi and occupied historical Palmyra while launching attacks at the Bab al-Salam crossing to Turkey to expand its logistics connection between Turkey and Aleppo. IS first captured Soran west of the Euphrates River and then moved toward Maree. These were the developments that compelled Turkmens to head to the Turkish border.

As for the importance of Tell Abyad, known as Gre Spi to the Kurds, IS has been able to harass Jazeera and Kobani cantons from its Tell Abyad base. Also, for the Kurds who abandoned Tell Abyad in 2012 to return, IS domination must end. Rojava officials also think that given Turkey’s stiff border regulations, they may get supplies needed for the reconstruction of Kobani via a corridor that will be opened to Jazeera canton bordering Iraq.

President Barack Obama has made reference on June 8 to IS boosting its strength with thousands of fighters coming to Syria via Turkey while Turkish officials "haven't fully ramped up the capacity they need" to prevent such movements, signaling continued Turkish involvement with dangerous groups, this time at Tell Abyad, following Kobani.

Because of its misguided regional ambitions and policies colored by a phobia of Kurds, Turkey is now placed in a position of abandoning civilians to the mercy of IS.