After Tell Abyad, what's next for PYD?

While Ankara is confused what to do after the victory of the Kurdish Democratic Union Party (PYD) and Free Syrian Army in Tell Abyad, the PYD is deciding on its next target. 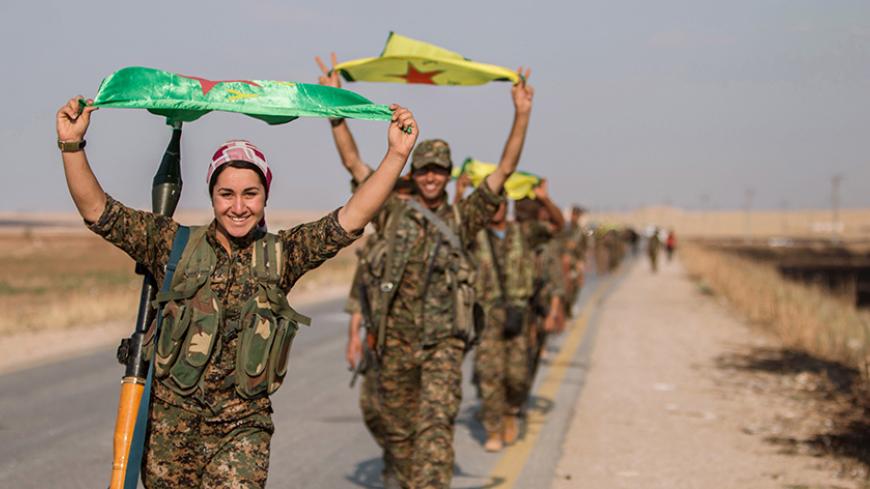 Kurdish fighters gesture while carrying their parties' flags in Tell Abyad of Raqqa governorate after they said they took control of the area, June 15, 2015. - REUTERS/Rodi Said

Tell Abyad on Syria's border with Turkey became world news after it was taken over by the People's Protection Units (YPG), the armed wing of the Kurdish Democratic Union Party (PYD), and its ally Burkan al-Firat, a Free Syrian Army (FSA) brigade, from the Islamic State (IS), which had been controlling it.

The small Syrian town of 14,000 people is directly located at the Akcakale border crossing with Turkey and has served for months as the key "logistics base" of Raqqa, the town that IS had declared as its capital. During IS' reign of Tell Abyad, the Akcakale-Tell Abyad border crossing through which IS received its supplies was never closed. Tell Abyad also served strategic functions. It primarily is the most critical junction on the road that links Jazeera and Kobani, two towns that were declared as cantons by the PYD in January 2014. It is also an assembly point that dominates the northeast of the city of Aleppo. Thus, in any Western coalition operation in Aleppo, Afrin and Raqqa, Tell Abyad is of paramount importance.

The capture of Tell Abyad by the PYD and Burkan al-Firat forces in an operation coordinated with coalition air forces is the first victory against IS by coalition forces in close air support with ground forces. No such achievement has been observed in Iraq as yet.

Was Tell Abyad captured or did it fall? Ankara is confused. According to the pro-government media and nationalist circles, Tell Abyad fell. Suddenly, claims that the United States has been supporting the PYD, the Kurdistan Workers Party's Syrian wing, to prepare the ground for a Kurdish state in the region gained prominence. A recent example of the perceptions promoted by the pro-government media was a headline in daily Sabah June 19: "The PYD is more dangerous than [IS]."

On the other extreme, the opposition media still jubilant with the Peoples' Democratic Party’s success in Turkey’s elections insist Syrian Kurds saved Tell Abyad from IS. But Turkish decision-makers are deeply disappointed with the fall of Tell Abyad, despite assurances by Syrian Kurds that they are not seeking a state of their own.

Daily Hurriyet drew attention to the security summit held in Ankara with the participation of the chief of general staff, some senior commanders and the chief of national intelligence. The report said that the major concern discussed at the summit was the possibility of the Kurdish corridor along Turkey’s Syria-Iraq borders extending to inside Turkey.

Another concern of Ankara is the uprooting of Turkmens and Arabs in northern Syria, which could alter the region’s demographics, and the establishment of a Kurdish barrier, which would sever Turkey’s connections with the rest of Syria. It is a fact that with the PYD taking over Tell Abyad, the Kurdish cantons of Jazeera and Kobani are now contiguous with major prospects of linking Afrin with Kobani.

That is why Ankara is now focused on Azez, which links Tell Abyad with Afrin. Ankara does not understand why IS has decided to attack Azez, an Arab area 15 kilometers (9 miles) from the Turkish border where mostly Turkmens live.

Ankara fears the possibility of at least 70,000 Syrian refugees piling up at its borders should IS capture Azez, which is currently controlled by the FSA. But a security expert in Ankara who spoke to Al-Monitor on condition of anonymity said Ankara’s real fear is not a refugee crisis but the likelihood of a fait accompli, similar to Tell Abyad. “If the coalition air forces start bombing IS targets in Azez as they did in Tell Abyad and the PYD takes over the vacated areas, it would mean Azez too will be linked to the Kurdish corridor at Afrin. This will be very difficult for Turkey to digest,” the expert said.

Another concern for Ankara are reports that Arabs and Turkmens in northern Syria are also on the run because of ethnic pressures. The Turkish media has been reporting that the PYD is engaged in ethnic cleansing in the area where Kurds were the minority. One particularly disturbing incident was when the PYD had closed the Tell Abyad border crossing for security purposes and thousands of Syrians who wanted to return to their homes were stuck at the Turkish side of the border.

If reports of the PYD’s ethnic cleansing and forced migration of those from locations it has captured are true, the alliance between the PYD and Burkan al-Firat could be in danger.

What is the next target after Tell Abyad?

After taking control of Tell Abyad, the PYD and FSA now have three options:

I assess that the strategic goal of IS to move toward Azez after losing Tell Abyad is to divert the Western attention to western Syria, and thus ease the pressure on Raqqa. IS will want to encourage the PYD and the coalition to distance themselves from the second option above, and opt for the third option, which is to move toward the west of the country.

Tell Abyad developments have clearly exposed the capacity deficiency of Turkey to fully analyze, grasp and influence events in areas adjacent to its border. Nearly the entire Turkey-Syria border of 870 kilometers (541 miles) is under control of groups Turkey sees as threats. As a result, there is a serious void of Turkish influence in northern Syria that is made worse by the "Kurdish allergy" in the Turkey’s security establishment, especially in the Turkish army and the Justice and Development Party government’s Islamist approach to the Syrian crisis.

The situation in Tell Abyad reaffirms that no single actor will be able to reshape the order in Syria. Heated debates on how to form a balance of power that will incorporate all the involved actors is likely to ensue.

But Turkey is repeating the mistakes it made in Iraq by betting on a single horse in Syria. Turkey, instead of persisting on its misguided approach of ignoring the Kurds in Syria, may perhaps repair the damage by emulating its normalization efforts with the Iraqi Kurds. Turkey does not view the realities on the ground in Syria the way they are, but as how it wants them to be.