Some observers believe that Turkish President Recep Tayyip Erdogan is attempting to force Turkey into a confrontation with Syria before a coalition government is formed. 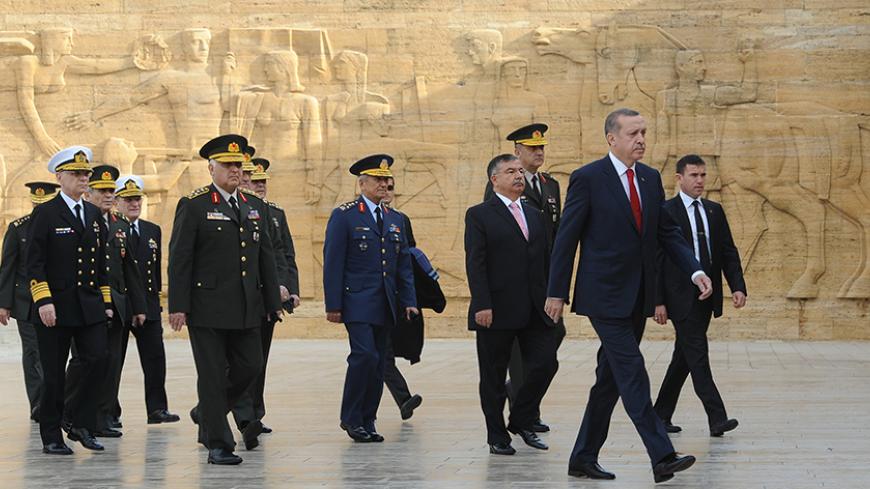 Turkey's Prime Minister Recep Tayyip Erdogan (R) leaves after a wreath-laying ceremony with members of the Supreme Military Council at the mausoleum of Mustafa Kemal Ataturk, the founder of modern Turkey, in Ankara, Nov. 30, 2012.

Newspapers are overflowing with scenarios that send Turkey into Syria after the expulsion of the Islamic State (IS) from Tell Abyad by the Kurdish People's Protection Units (YPG). A flurry of speculation about operational plans followed President Recep Tayyip Erdogan’s declaration that Turkey will never allow establishment of a Kurdish state in northern Syria. According to a report by government mouthpiece daily Yeni Safak, 18,000 Turkish soldiers are to enter Syria through the Karkamis and Oncupinar crossings and set up a buffer zone 28-33 kilometers (17-20 miles) deep and 110 kilometers (68 miles) long.

Yeni Safak’s veteran columnist Abdulkadir Selvi, reputed to be well-plugged-in to the ruling Justice and Development Party (AKP), shared details of the Turkish Armed Forces (TSK) operational planning: If the buffer zone is 5 kilometers (3 miles) deep, it will need two brigades, or four brigades if it is 10-15 kilometers (6 to 9 miles) deep. Soldiers will not line up in a single file along the 110-kilometer (68-mile)-long border. Company or battalion size units will be deployed on dominating land features. These units will have observation capacity as well as firepower. Howitzers with a 40-kilometer (25-mile) range will be deployed inside Syria and provide security for the buffer zone.

The National Security Council meeting June 29 ended with a communique that gave the impression of putting the brakes on an intervention rather than there being an imminent one. The communique said possible threats in Syria and extra security measures along the border were discussed and concerns were expressed over attempts to change the demographic structure of the region, which means Kurdish domination of the area.

According to the daily Milliyet, which reported behind the scenes of the council meeting, two red lines were drawn: If the Kurdish YPG moves to Jarablus, currently controlled by IS, or if regime forces launch operations that will provoke a refugee wave from north of Idlib to Turkey, then the TSK is authorized to respond without waiting for further orders.

The Jarablus red line was drawn on scenarios of IS capturing two border crossings at Bab al-Salam and Bab al-Hawa, currently controlled by the opposition, and the YPG initiating action to expel IS from those crossings, resulting at a contiguous Kurdish belt.

Reports on intervention plans were accompanied by conspiracy theories that the YPG was conducting ethnic cleansing of Arabs and Turkmens and that the United States was pushing for a Kurdish belt. The government explains Turkish intentions to the domestic public as “blocking of a Kurdish state” and as "combating IS" to external audiences. It works, as Kurdish phobia still prevails in Turkey and the image of "combating IS" is essential to ease foreign pressure on the government and repair Turkey’s sagging image.

But the intervention justifications leaked to the media are not based on facts. The first of them is that Kurds are engaged in the ethnic cleansing of Arabs and Turkmens. The first ethnic cleansing accusation came from Erdogan. But when he triggered a cacophony by saying, “There is a feeling that Arabs and Turkmens are targeted at Tell Abyad,” the Kurdish YPG and its Free Syrian Army ally Burkan al-Firat had not yet entered Tell Abyad.

It is true that the YPG is not allowing people to return to villages vulnerable to IS attacks and where there is danger from mines. But the YPG and the Democratic Union Party (PYD) have consistently said all civilians will be allowed to return to their homes.

There is another reality that the AKP leadership and its media overlook: The success of the canton system at Rojava is not due to ethnic cleansing but to the skillful management of having all ethnic, religious and sectarian communities live together with a "social contract" that kept the area away from the civil war.

The second media warmongering justification for a Turkish intervention is because "a Kurdish corridor is opening. This will be a security threat to Turkey." But when we review the record of the autonomy movement in Rojava for the past three years, we don’t see any threats to Turkey. To the contrary, the safest places along the border are locations controlled by the YPG. The YPG and the PYD repeatedly express security assurances to Turkey. Such assurances did not stop even when Islamists attacked Kurdish locations such as Serakaniye by using Turkish territory. The Turkish government did not worry about security when the Jarablus, Tell Abyad and Rai border crossings were first taken over by Islamists and then by IS.

The third justification for a Syria intervention is because "they are preparing the ground for a Kurdish state." Kurds are fighting to defend their land, homes, women and children at Rojava. Yes, the Kurds want corridors between their cantons to reinforce their defenses, but they are also aware of geographic and demographic barriers to the creation of a single, unified Kurdish entity from Jazeera to Afrin.

There is another justification now being promoted. IS "is heading west with [Syrian President Bashar al-] Assad’s support. If [IS] moves on to the Marea Line, then Assad will provide it with air support," is the claim. What they call Marea Line is the road from Raqqa to the Bab al-Salam crossing on the Turkish border.

The latest charge came from Prime Minister Ahmet Davutoglu, who said, “The regime met with [IS] at a location we know in Hasakah, close to turf controlled by the PYD. The regime then withdrew from the area and [IS] advanced.”

Our government’s field knowledge is pathetically full of holes. We all saw the utter inaccuracy of the intelligence estimate that predicted the capture of Damascus in two weeks. At one time, Ankara responded to the prominence of organizations similar to al-Qaeda by saying that Assad had freed al-Qaeda militants from its Sadnaya jail to set up organizations such as Jabhat al-Nusra. Zehran Alkush, who was released from Sadnaya in 2011 with the hope of finding a negotiated settlement to the crisis, actually founded the Islamic Brigade and the Islamic Army to fight the regime. Others then followed suit: Hassan Abboud formed Ahrar al-Sham; Ahmed Issa al-Sheikh established Soqour al-Sham; and Abdul Rahman Suweis created Liwa al-Haqq. Abu Muhammed al-Golani joined the war against Assad's regime as the leader of Jabhat al-Nusra. All of these are now on the list of organizations supported by Turkey, Qatar and Saudi Arabia.

What is noteworthy is the speculation that “if [IS] crosses the Marea Line, then the Bab al-Hawa and Bab al-Salam crossings will be endangered.” If that happens, that will be the end of the latest Turkey-Saudi-engineered revolution project because it will be the end of logistics support of Jabhat al-Nusra, Ahrar al-Sham and other jihadist groups making up Jaish al-Fatah. No wonder they are worried.

Election results in Turkey really worried the proponents of the proxy war. Jamal Khashoggi, a Saudi journalist close to the palace, took the pulse of AKP leaders and wrote an article in the daily Al Hayat that said, “No need to worry. Erdogan is still the master.”

He concluded the article by saying, “Turkey has an important role to play as events there are accelerating, especially in the north, whereas in the south Saudi Arabia and Jordan are fulfilling their duties. When north meets south, someone must call Erdogan and ask him to accelerate what has been agreed upon. He is still headmaster, after all.”

Erdogan seems to be in a hurry to keep his word. It will not be possible to sustain the Syrian policy when a coalition government is formed in Turkey, so Erdogan is dragging Turkey into an adventure in the transition period.

Erdogan wants to win the elections he lost, this time as the commander in chief. Surely he must be aware that this calculation includes deadly risks such as clashing with the Kurds, fighting with the Syrian army and provoking the IS nightmare against Turkey.